Behind the music on "Vinyl": David Bowie bookends, plus an Iggy Pop tease

Episode 6 brings us "Suffragette City" and "Life on Mars?" and Andy Warhol gets knocked out [UPDATED] 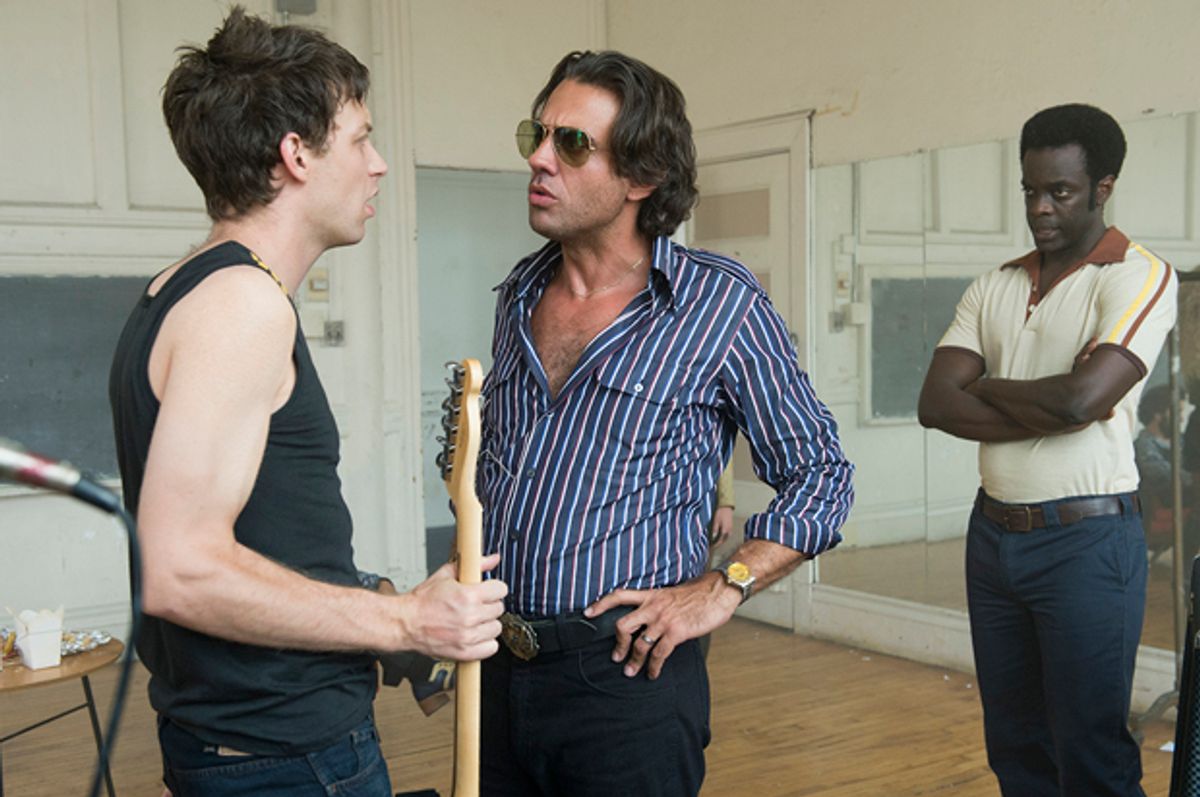 UPDATE: HBO has confirmed it was actually David Bowie's voice heard last night during "Suffragette City." The Official David Bowie page on Facebook has noted that the version of "Suffragette City" used in the episode is the original studio recording, "heavily reverbed." The distortion of the studio recording to make it sound like a live rehearsal version rendered Bowie's voice unrecognizable to this critic.

“Cyclone,” the sixth episode of “Vinyl,” the HBO drama from Martin Scorsese about the music business in the 1970s, opens with main character Richie Finestra (Bobby Cannavale) on a major, multi-day cocaine bender (no, seriously, even bigger than previously). He runs out of a rehearsal studio as the unmistakable chords of none other than “Suffragette City” by David Bowie roar out of a Les Paul, the edge of which swings into the corner of your screen, and you realize what has to be next.

At that moment, your reaction will likely be one of the following:

And then David Bowie and the Spiders from Mars will appear, performing “Suffragette City.”

Did you ever notice how many David Bowie cover bands there are? Almost none, and this episode of “Vinyl” clearly displays why. Let’s start with what we hear: “Suffragette City” seems like a basic rock and roll song, but it’s actually more complex than it might appear on the surface. And it was Mick Ronson’s skill and facility with the instrument and the tone he got out of his guitar that makes it sound so stripped down and essential, not because it’s an easy song to play right, or well.

The other problem is—and this is also true for Lou Reed’s backing band in Episode 5—there’s no such thing as an instant rock band. Session musicians will certainly sound polished, professional and competent, but there’s a specific sonic dynamic (as well as an energy) that comes from playing with each other day in and day out over an extended period of time. So that is always going to be missing when “Vinyl” needs to have a band performing music, both in the recorded music and the energy on screen from the actors portraying the band.

The biggest problem with this version of “Suffragette City” played on “Vinyl” is that it’s a wan, pale approximation of the real thing, and there is no way that anyone wasn’t going to seem like a wan, pale approximation of David Bowie because it’s David goddamn Bowie. But even with all of that, when listening to the “Vinyl” version of the song repeatedly on headphones trying to be objective, there still isn’t any life or spark, and without it, it’s a lot of sound and fury signifying nothing. The writers of the show scripted this scene to include as much of the song as they did for a reason; yes, it’s technically a “rehearsal” but if it was just a rehearsal or a soundcheck they could have included a verse and a couple of riffs and been done with it. The song is included in the show in this position and at this length because it’s an important song on the continuum that the Nasty Bits are about to try to fit into. It is here for necessary context, and it should make your auditory ossicles vibrate with joy. That does not happen.

The other problem will be that Noah Bean, who plays Bowie, has zero English accent. He does manage to approximate some of Bowie’s physical demeanor both in performance (although, again, Bowie was just so much more lithe, even in platform shoes, probably due to his training as a mime), in his spoken intonation (despite the lack of accent), and in his interaction with Andrea Zito (Annie Parisse). But he looks more like David Cassidy than he does David Bowie, and that just ruins the initial performance shot and shadows the rest of the scene.

The rest of the Spiders are more than serviceable, and Mick Ronson (Mike Dudolevich) isn’t half bad, but as usual, the most points go to the character that you’d blink and miss if you weren’t paying attention: the woman playing Angie Bowie (who doesn’t even get a credit), that woman with the harsh bangs dancing on the side of the stage and following David briskly offstage as he leaves.

1973 was the second year of the tour for “Ziggy Stardust”; it would be the end of Ziggy (and Bowie will mention that in an offhand comment) in July at the Hammersmith Odeon. Bowie played in New York in February, two nights at Radio City Music Hall (and rehearsed there the night before), and appeared at similar sized-venues around the country; he was already well past of venues the size of the one he’s shown in this episode.

The sound of “Raw Power” echoes down Park Avenue South as Richie and Ernst (Carringon Vilmont) approach the unmistakable awning of Max’s Kansas City. Iggy Pop played there at the end of July in 1973, “midnight shows only,” according to the ad in the Village Voice. Richie manages to knock out Andy Warhol (that’s supposed to be Nico with him) and gets escorted away from the venue, so we don’t actually get to see Iggy onstage at Max’s, where he cut himself on a martini glass and bled all over the place.

Iggy comes back in the episode as the background music as Richie realizes that he’s missed Zak’s daughter’s Bat Mitzvah — “No Fun,” which seems unnecessarily unkind — and then transitions into a scene where Kip (James Jagger) is sitting in a guitar store, playing along to the song in his head. That’s where he meets Alex (Val Emmich), who’s going to be the new guitarist for the Nasty Bits. (There’s a brief scene earlier where Richie comes into the auditions and everyone complains about hippies showing up when the ad for the gig clearly said, “No Hippies.”) It’ll be curious to see if Iggy Pop makes an actual appearance later on the show, and a cynic might muse what convenient timing it would be if he did, given that his new album dropped March 18th — but it’s hard to be cynical about Iggy Pop ever, let alone right now given that he’s still here and making music, and the other two thirds of the punk rock “Holy Trinity” are no longer with us.

The music of David Bowie also shows up again towards the end of the show, and your first reaction is likely to be worse than the first one, because this one makes no attempt to sound anything like him. “Life On Mars” is in the background of the scene as Devon piles the kids into the car to take them away from Richie, and that might make you wince a little bit, until the scene cuts to the source of the music: it’s the pianist for the Bar Mitzvah band at Zak’s daughter’s party, and the performance has great attitude and energy. Zak’s sitting there after a very long day, and the transformation of his expression as he realizes that he’s seeing actual talent provides the viewer with some actual optimism after an otherwise incredibly dark and disheartening episode. Here’s hoping Zak walks into American Century next week with this kid in tow.