The way Trump talks has long been the target of mocking, but it shouldn't be. It's the secret to his unlikely power 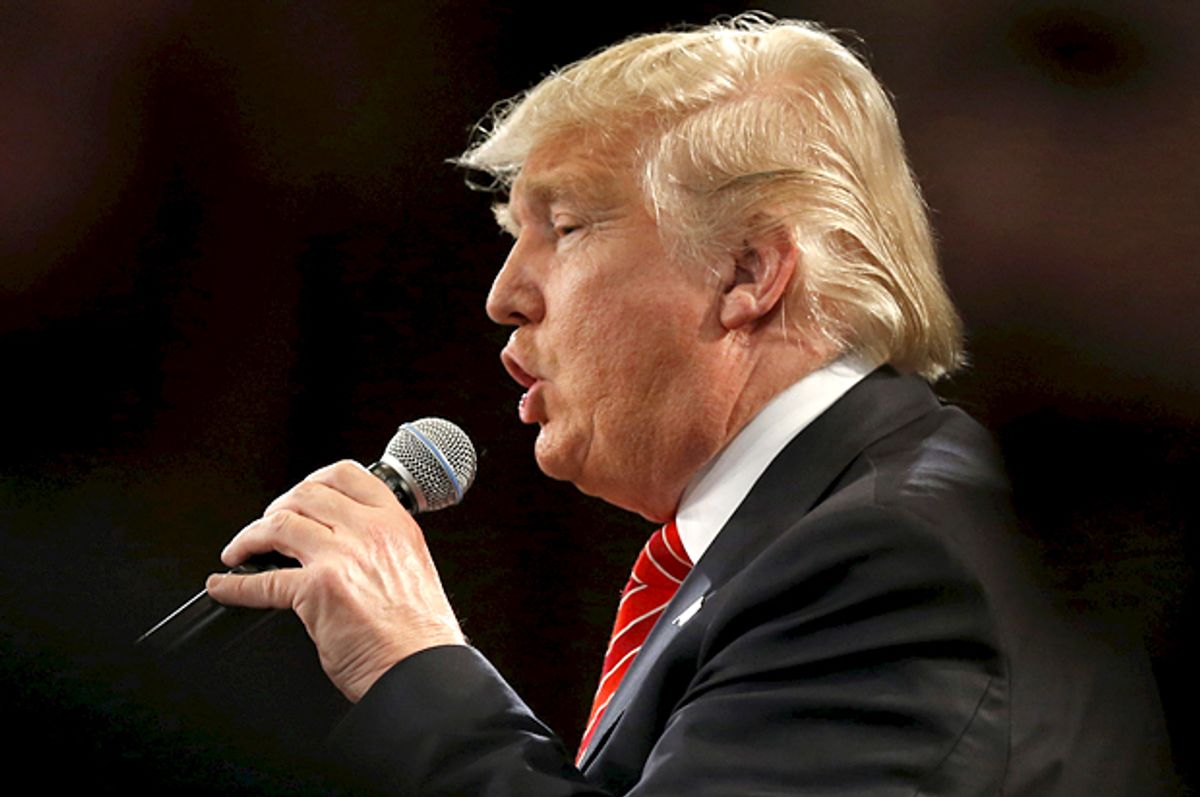 Earlier this month, protesters disrupted a Donald Trump rally in Fayetteville, North Carolina, among them a young man named Rakeem Jones. As he and the others were being escorted out, John McGraw, a 78-year-old Trump supporter, punched Rakeem in the face in full sight of the crowd, the police and the cameras. The police managed to not see the punch and detained Mr. Jones instead.

In the moments after the punch, Mr. McGraw basked in the glory of his personal contribution to American “great”-ness, implying that he had struck a blow against un-Americanism and ISIS simultaneously. “He [Rakeem] deserved it.”, McGraw argued. “He could have been ISIS. The next time we might have to kill him.” The local authorities -- the ones that could see, at least -- did not see it that way. Later that day, Mr. McGraw was arrested and charged with assault.

Hatred, according to Italian author and philosopher Umberto Eco, is “generous.” It is “warm.” It allows you to “belong to a people who also hate.” Together you form a collective.

Trump’s language has played a key role in creating this collective. It energizes them. It unifies them. It deconstructs the old model of coded bigotry on the right and reconstructs it in a more open form. While many argue that Trump’s language distinguishes him from the conservative establishment, in reality it is the latest -- perhaps last -- great ruse of conservatism on (mostly white) working-class Americans. After decades of policies that have guaranteed stagnant wages, little upward mobility, and even shortened life spans, Trump arrives with one last hustle.

Political strategist Lee Atwater is credited with most clearly defining the old rules of conservative coded bigotry: The politician who used to be able to say “n***er, n***er, n***er,” should be urged to use pre-approved terms like “busing,” “tax cuts,” “deregulation” or “states’ rights” instead. This allowed the common bigot and his representative to preserve their power and embed themselves safely in the American mainstream. Trump does a sort of gut renovation to this model and replaces it with a more open form of bigotry, along with a kind of hedge -- something he calls, in "The Art of the Deal," “thinking big” but still “protecting his downside.”

For example, read two of his most infamous public statements. Referring to Mexican illegal immigrants Trump argued the following:

"I think that we can go to lots of places. I don't know, maybe he feels comfortable there," Trump told Fox News' Greta Van Susteren. "We have a lot of problems in this country, Greta. There are a lot of places he can go and he chose a mosque. I saw that just a little while ago. So that's his decision, it's fine.”

Trump assumes “some are good people.” The mosque trip is “his decision, it's fine.” Those statements are not meant to contradict the earlier point, but instead to provide a little bit of a hedge -- a kind of implausible plausible deniability -- against charges of bigotry or demagoguery; but the only people fooled by the tactic are Trump’s most rabid followers.

The conservative and Republican establishments, like most people, immediately saw the danger in Trump’s rhetoric, but they could not acknowledge that it was outright bigotry. Instead they used coded, muted language to criticize Trump. Reince Priebus, Republican National Committee chairman, argued that Trump’s “tone” was the problem. Nikki Haley, governor of South Carolina, argued that his language was “irresponsible” in her 2016 State of the Union response telecast. Trump's supporters were infuriated by even this tame criticism. Priebus’ Facebook page was flooded with insults and threats. Trump surrogate Ann Coulter argued for the deportation of Nikki Haley. The establishment saw and continues to see the threat that Trump poses, but many also see opportunities for great -- or maybe, in Trump speak -- fabulous dealmaking.

Consider the conversion of Fox News to Trump’s camp. In the first Fox GOP debate, host Megyn Kelly opened with an attack on Trump's sexism and misogyny. Trump retaliated by accusing her of being a "bimbo" and treating him unfairly because she was on her period. He argued that her unprofessional behavior forced him to skip the second Fox News debate, but he rejoined them for the third. In that debate, Trump avoided many foreign and domestic policy specifics, but made a point of reassuring his supporters of the adequacy of both his hand and penis size. Megyn Kelly called his use of language "refreshing."

Fox host Bill O'Reilly, after years of chastising rappers, writers and artists of all stripes for inappropriate use of language, labeled Trump's dick talk "jocular," language meant to appeal to "regular" people. The kind of people who would be appalled by a rapper bragging about his sexual prowess are presumably fine with the Republican presidential nominee doing it. Decorum, protocol and even preparedness are merely other forms of “political correctness” that must be challenged no matter the consequences -- because, for Fox News, there are no consequences, but for the average Trump supporter there might be.

The line that brings down the house at every Trump rally, whether the hosting state borders Mexico or Minnesota, is that he will “build the wall.” This wall is not merely for physical safety, but like China’s Great Wall, it is also a philosophical and psychological boundary. Trump’s wall separates those who have the power and privilege to speak without fear of consequences from those that do not.

When Trump is merely civil in a debate, he is labeled “presidential.” When he regurgitates his talking points, he is credited for “staying on message.” Trump’s history of abusing the system -- buying political favors, fawning over politicians he now opposes, outsourcing American jobs -- in the minds of his supporters qualify him to reform the system. Trump has already built his wall and his supporters want the same.

The young Marine recruit who was kicked out of the military for harassing a protester would like a wall. The high school students who publicly ridiculed Latino basketball players with the Trump rallying cry would like a wall. And John McGraw of course would like a wall. Trump’s rhetoric, for many of his supporters, is a kind of war paint that they coat themselves with expecting that it will give them the same privileges as Trump, but it is a protective shield that does not protect. It is a mask that does not hide. It unifies them with their peers, but separates them from their great leader.

The economist Joseph Schumpeter, while writing about the appeal of imperialism to the common man, observed that during the Boer War there was not one beggar in London who did not speak of “our” rebellious subjects. The honor of the crown was owned collectively in the imaginations of even the poorest, while its spoils were not. The hatred was “generous” but the crown was not. This is the lot of the Trump supporter. Trump stands to benefit handsomely from his political popularity -- as does Fox News. And while the two rail against the horrors of so-called p.c. culture, the world grows more interconnected and America more diverse.