RuPaul gave me life: How "Drag Race" pulled me back from the depths of depression 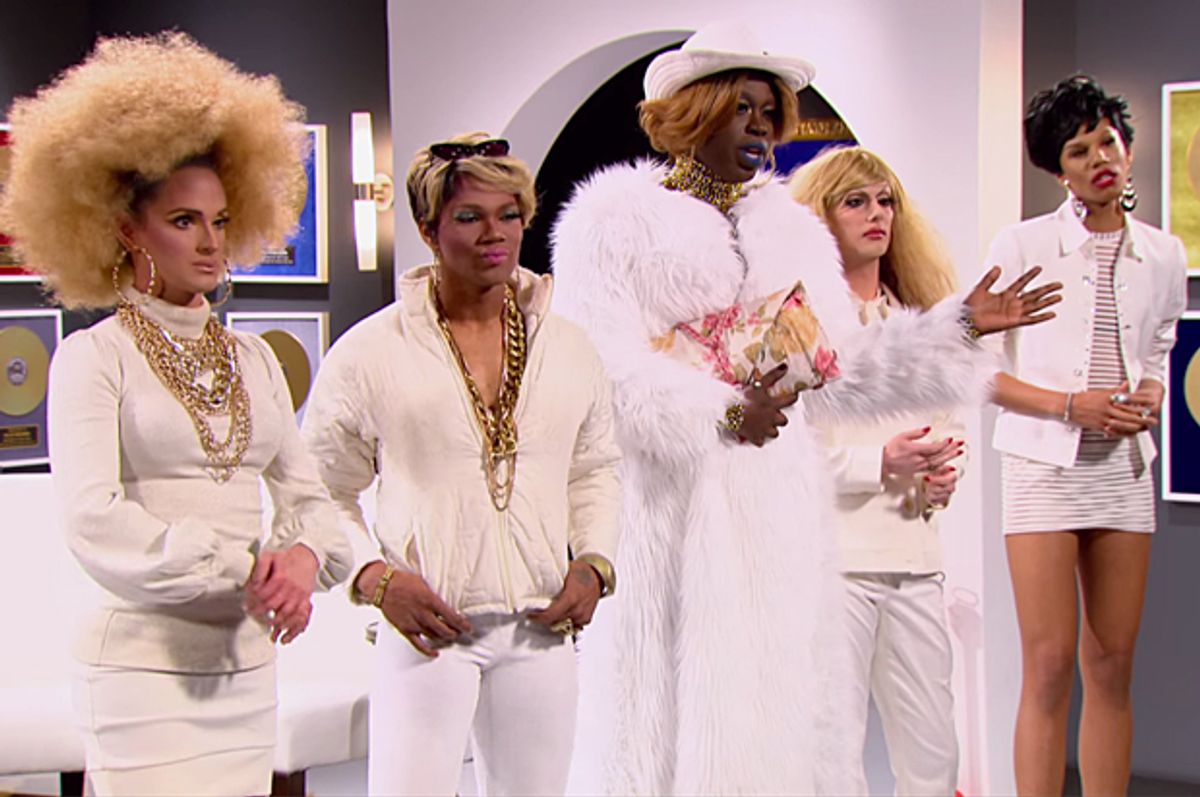 "The time has come for you to lip-sync … for your life."

That statement, followed by a pair of spotlights arcing dramatically around a pair unfortunate drag queens who didn't make the grade that week, marks the beginning of the end for one of them.

Not before the bottom two defend their right to claim their piece of the stage. The "lip-sync for your life" is a battle royale in which the weapons are spontaneous gymnastics, hairography and dramatically mouthed lyrics. If the situation is truly desperate, one contender might bust out a death drop – a leap into midair splits that plummets straight down to the boards hard enough to give the viewers at home phantom pains in their nethers.

All of which is to say, if you're one of Ru's "girls" and he's saying that to you, it's time to turn it out.

When I heard it for the first time, I could barely get out of bed.

A weekly dose of wig-fluffing, sequined-sparkling pageantry that spotlights performers vying to become the Next Drag Superstar, "RuPaul's Drag Race" returned for its eighth season (and has now passed its 100th episode) this month on Logo.

The fact that "Drag Race" reached me at all some seven years ago was a minor miracle; very little else did. I was experiencing a depressive episode that felt like life had tied me to an anchor and thrown me into the sea; I had sunk down, way down, until I came to rest on the floor of my very own Mariana Trench of despair.

If you've never felt like that for any sustained period of time, be grateful. Being down there made actions most people take for granted -- getting out of bed, showering -- feel crushing.

Oh, I was moving through the world, even appearing to socialize. All the while, my sense of self-worth had disconnected from my physical body, flown away to parts unknown, buh-bye now! Walking around was an action achieved not by me, but by some meat suit simulacrum operated by a tiny alien. I was not a woman. I was barely human.

Therefore, all of my communication was lip-syncing. "Hello." "Can I get that on the side?" "I love you too." "I'm sorry." "I'm sorry." And to the person in the mirror, a gray-skinned, frizzy-haired specter I barely recognized, "I hate you."

The very concept of gorgeous was altogether forgotten, a memory as garbled and scratchy as an old club track. Gorgeous isn't just a descriptor, it's a feeling. Depression is the antithesis of feeling.

Yet, here was Ru, a self-described "big old black man under all this makeup," calling people – calling me – to lip-sync for my life. To wake the hell up and be gorgeous again.

On its face, "RuPaul's Drag Race" can be described at its most basic level as "Project Runway" meets "America's Next Top Model," only with gay men who both construct their own couture out of needles, thread, glue and, just as often, prayers, and stalk the runway.

Its host, RuPaul Charles, became famous for his 1993 hit "Supermodel (Of the World)" and enjoyed a wave of fame through the '90s, all but disappearing during the following decade. His return in "Drag Race" marked his career rebirth, and after a barely viewed first season, the series took off.

Unlike the "I'm here to win!" mentality fueling most reality competitions, "Drag Race's" central message is that of triumphing over adversity by embracing what RuPaul describes as one's "charisma, uniqueness, nerve and talent." (Words carefully chosen for the acronym.) Admittedly it's not all sunshine and florals; this is a survival of the fiercest, and the claws come out the moment a new season's engine growls to life.

"Drag Race" isn't just Logo's most popular original series, it's a pop culture phenomenon that's been credited in part for helping forward the cause of LGBT rights worldwide. Before Caitlyn Jenner came out, before Amazon's "Transparent" made transgender issues and rights a topic of dinner table conversation, "Drag Race" made a star out of Carmen Carrera, who revealed she was transitioning while she was on the show.

If it takes guts for a woman to walk into public in an attention-commanding dress and sky-high heels – and don't kid yourself, it really does – then to do all that as man or a trans woman in this society requires a steel will.

Behind the irrepressible bubbliness and moxie of "Drag Race" All-Star Jujubee is Airline Inthyrath, a boy who was so in the habit of being insulted for his orientation that he said as a child, he used to answer to "faggot."

Season 4 contestant Timothy Wilcots, aka Latrice Royale, seduced me with his wisdom, his hilarious catchphrases ("Jesus is a biscuit – let him sop you up!") and his unsinkable positivity; before "Drag Race," he served jail time, forcing him to miss his mother's funeral.

The contestant pool has included survivors of assault, people abandoned by their parents or kicked out of their homes, men for whom being gay nearly cost them their lives. Second season winner Tyra Sanchez (aka James Ross IV) was homeless when he entered the competition. Yet they all found a way to get back up and, in the words of Latrice, "look sickening, and make them eat it."

I came to understand that drag is about more than artistic expression and celebration. It is armor, too, reminding the wearer of the joy and privilege of being alive.

The line that pulls a soul back from the murk, the speck of grace that arrives to give you life, can be completely unexpected. I'm a person with a deep connection to the medium of television but little affection for unscripted TV. There was no way to predict that watching drag queens cake concealer on their T-zones and slather glue stick over their eyebrows would lead me back to the world of the living.

Soon after watching the first few episodes of "Drag Race," my morning ritual expanded from propping myself up to absorb the show's bright spectrum of colors and glitter, to creating my own gender illusion. Showering would be followed by listening to Ru's crystalline laughter and banter with contestants, as I excavated ancient makeup palettes from the depths of cluttered drawers. I adopted a practice of painting my eyelids, and brushing the illusionary pink of health into drawn cheeks and peeling lips.

I wish I could say that the power of drag and "Drag Race" healed me, hallelujah! Not the case, not by a long shot. Rather, consciously spending time with each hour was one of many balms that put me on the path to self-care and getting well.

"Anyone who has the courage to break free and follow their heart is my hero," Ru said in the opener of Season 2, and though I still felt a hole aching in my center, I began to reclaim and restore the ruins that were my face, my hair…my fingertips, toes, legs, my entire body. Episodes played in the background each morning before work while I lavished my lashes with mascara, or drenched my flaky skin with lotion.

"I'm taking the stage. I'm owning it. I'm here, bitches!" Ru crowed in another segment, and I took that to heart. If the real me couldn't live right now, then this other version of me I'd created out of creams, elixirs and old powder, the drag me, would have to carry a tired bitch through the world for a while. And she did that, for at least two years.

Drag Me was confident, poised. Drag Me stood her ground, tried new things, wasn't afraid to laugh at herself or stumble. Eventually I began getting my hair styled, purchased new cosmetics. Went to the dentist. Took dance classes. Showed up at birthday parties, at weddings. Showed up for life.

Somewhere around Season 5 or 6, I realized that my drag persona didn't have to carry that exhausted other girl anymore. The old me was gone, a faded star that collapsed into a black hole, vacuumed in all the woes of the cosmos, and blinked out.

One hundred episodes into "Drag Race," it, too, has become more full of itself, in the best sense of that term. Contestants are noticeably working for the cameras, doing what they can to stand out and create marketable personas. Any reality series that stays on the air long enough loses some of its specialness and mystery, but that's fine. At least it's around.

RuPaul, meanwhile, has become a figure beloved by many for being equal parts host extraordinaire, motivational guru, pop star and comedian, not to mention a shameless marketing genius who could sprinkle rhinestones on a snow cone and sell it to a polar bear.

But even after 100 episodes, some aspects blessedly remain the same as they did from the start. At the end of every show – post lip-sync, after the eliminated queen has "sashayed away," Ru reminds viewers, "If you can't love yourself, how the hell you gonna somebody else? Can I get an amen up in here?"

For the queen who sold me on the idea of reclaiming my life? Gladly. Amen.