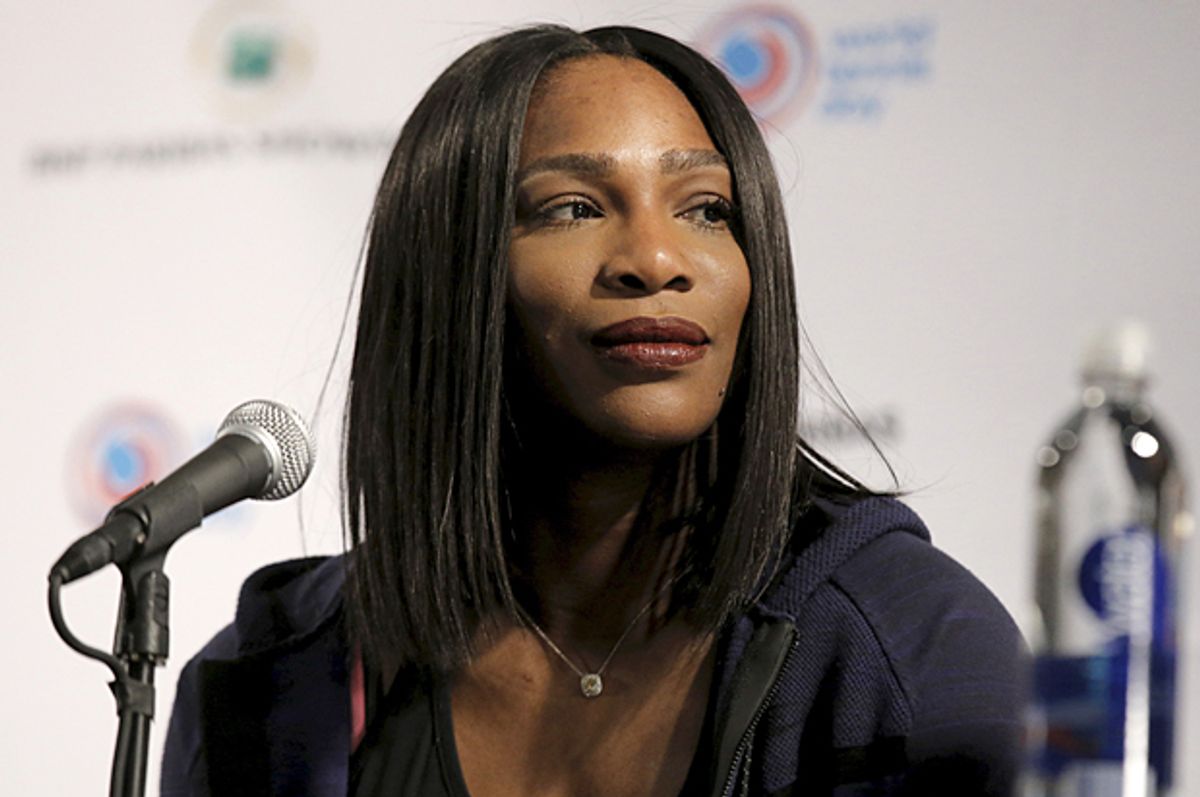 The sexist dum dums just still refuse to read the memo: One of the greatest athletes of all time is an African American woman. One of the most exciting things going on right now, across all sports, is women's tennis. Yet the condescending, offensive crap — from within the field itself — just does not quit.

The latest example comes courtesy of Raymond Moore, the 69 year old CEO of Indian Wells who on Sunday, right before the BNP Paribas Open finals, told the media that "In my next life when I come back I want to be someone in the WTA, because they ride on the coattails of the men. They don’t make any decisions and they are lucky. They are very, very lucky. If I was a lady player, I’d go down every night on my knees and thank God that Roger Federer and Rafa Nadal were born, because they have carried this sport. They really have."

Oh, lady players, how fortunate you are. Especially you, Serena Williams, with your 21 grand slams — four more than Federer and seven more than Nadal.

Then, even as he acknowledged that Serena is "arguably the best player of all time," (Arguably?) Moore then dug himself in further by citing Eugenie Bouchard and Garbiñe Muguruza as "very attractive players." New York Times journalist Ben Rothenberg reports that when asked to clarify if he meant "physically or competitively," he said, "I mean both. The are physically attractive and competitively attractive."

Then, adding gasoline to the commentary dumpster fire, top-ranked Novak Djokovic later jumped in to the conversation to talk money, saying, "I think that our men’s tennis world, ATP world, should fight for more because the stats are showing that we have much more spectators on the men’s tennis matches. I think that’s one of the, you know, reasons why maybe we should get awarded more. Women should fight for what they think they deserve and we should fight for what we think we deserve." He then added he has "tremendous respect" for women, because "Knowing what they have to go through with their bodies — and their bodies are much different than men’s bodies — they have to go through a lot of different things that we don’t have to go through. You know, the hormones and different stuff — we don’t need to go into details. Ladies know what I’m talking about. Really, great admiration and respect for them to be able to fight on such a high level." Pssst, I think he's talking about periods. Ladies, am I right?

After defeating Williams in the women's final, Victoria Azarenka commented on Moore's idiot remarks, saying, "What women do best is rise above those comments. You don't hear complaints or bad comments towards men." Williams, meanwhile, was clearly more exasperated, saying, "I don’t think any woman should be down on their knees thanking anybody like that… If I could tell you every day how many people say they don’t watch tennis unless they’re watching myself or my sister — I couldn’t even bring up that number. So I don’t think that is a very accurate statement." And she added, "There’s only one way to interpret that. '‘Get on your knees,' which is offensive enough, and 'Thank a man'? We, as women, have come a long way. We shouldn’t have to drop to our knees at any point." Moore later issued an apology, calling his words in "extremely poor taste and erroneous," but that little window into an enragingly typical mindset had already been opened.

As it happens, Indian Wells already has special meaning to Serena Williams, who in 2001 was so spectacularly jeered by the crowd — furious that her sister Venus, citing a knee injury, had recently withdrawn — that she boycotted it for years. She returned last year, recalling that "The undercurrent of racism was painful, confusing and unfair. In a game I loved with all my heart, at one of my most cherished tournaments, I suddenly felt unwelcome, alone and afraid."

In the intervening years, Williams has endured a ludicrous amount of sexist crap — all while climbing to the status of greatest of all time. In 2012, Bleacher Report grudgingly declared, in a feature on "hot Olympians," that Serena "is not one of the hottest female tennis players in the world, but her amazing figure makes up for any lack of beauty elsewhere."

Two years ago, Russian tennis chief Shamil Tarpischev earned a suspension and fine for referring to Venus and Serena as "the Williams brothers" and complaining, "It’s frightening when you look at them." Last year, even the Times' Ben Rothenberg couldn't resist noting that Serena "has large biceps and a mold-breaking muscular frame.… Her rivals could try to emulate her physique, but most of them choose not to." When Sports Illustrated crowed Williams their 2015 Sportsperson of the Year for embodying "the spirit of sportsmanship and achievement," fans were furious she'd edged out American Pharaoh, who is a horse. The LA Times then jumped into the debate, asking readers, "Serena Williams or American Pharoah: Who's the real sportsperson of 2015?" Seriously.

Moore's comments were not just about Williams, but as as someone with a lot of experience on the subject of how females — even female who are rewriting history and outdoing everybody in the field — are minimized and resented, it's Williams who gets the last best word on this newest debacle. "You look at someone like Billie Jean King who opened so many doors for not only women's players but women athletes in general," she said at her Sunday press conference. "That is such a disservice to her and every female, not only a female athlete, but every woman on this planet that has ever tried to stand up for what they believed in and being proud to be a woman.