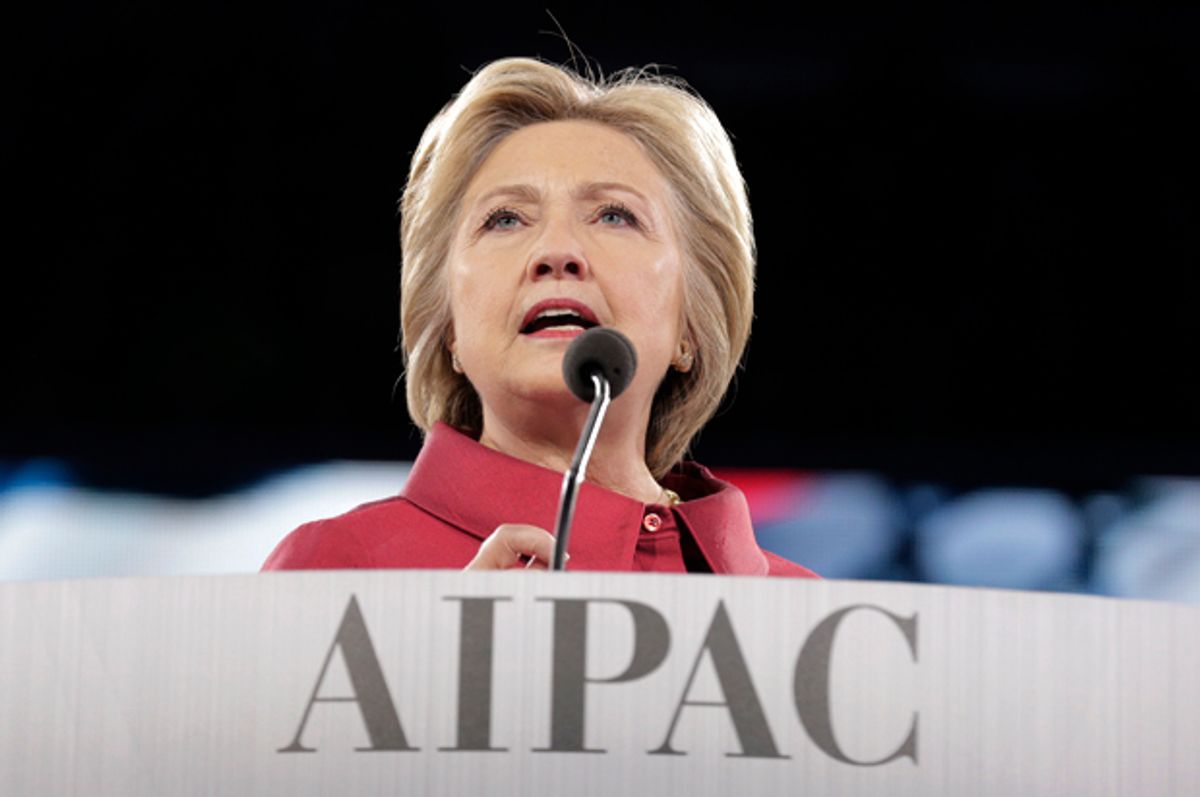 She aggressively voiced support for Israel and hard-line right-wing Prime Minister Benjamin Netanyahu, and made no mention of the Israeli military's almost five-decade-long illegal occupation of the Palestinian territories.

Clinton also blasted her opponent Bernie Sanders, the only presidential candidate to turn down the invitation to speak at the AIPAC conference, for promising to be neutral on Israel-Palestine. Sanders said he would pursue a "level playing field" in negotiations, something Clinton insisted she would never imagine of doing.

Many progressives, young Americans and Jewish Americans are distancing themselves from Israel, which is increasingly far-right. The current administration is the most right-wing government ever in Israel, and Netanyahu will soon be the longest serving prime minister in the nation's history — acting as head of state for even longer than Israeli founding father David Ben-Gurion.

"The speech that Hillary Clinton gave to AIPAC took pandering to a new level," said Yousef Munayyer in a statement.

Munayyer, the executive director of the U.S. Campaign to End the Israeli Occupation, noted that Clinton's speech "could well have been written by an Israeli government public relations firm."

He accused Clinton's remarks of being "out of touch with Americans and in particular the base of the Democratic party."

"Clinton promised to never be neutral and yet most Americans consistently express that they want the United States to be even-handed between Israel and the Palestinians," Munayyer said. "When one looks at public opinion among Democrats alone, this sentiment is even stronger and sympathy for Palestinians is even higher. This is especially true in the progressive base of the Democratic party — indeed the future of the party — made up of youth and minorities."

"This reflexive deference to pro-Israel interest groups has been at the foundation of failed U.S. policy on the peace process," he said.

The social justice group Jewish Voice for Peace, or JVP, which is very critical of the Israeli government and its oppression of the Palestinians, blasted Clinton for her remarks.

Rebecca Vilkomerson, the executive director of JVP, said in a statement that the discussion at AIPAC "relies on racist and Islamophobic tropes to justify unquestioning support for Israel."

"From Democrats to Republicans, the message is the same: more arms for Israel, a stronger relationship between Israel and the U.S., no mention of Palestinian rights, and no recognition of the impossible contradiction of being both democratic and Jewish when the state is predicated on maintaining systems of unequal rights and rule by military occupation," Vilkomerson said.

“From both sides of the aisle," she added, "speakers dehumanize Palestinians and obscure their calls for dignity and freedom."

Many Palestinian leaders were intensely critical of Clinton's comments.

Diana Buttu, a Palestinian attorney and political analyst who previously advised the Palestine Liberation Organization, said in a statement: "Secretary Clinton acknowledged that the U.S. is not ‘neutral’ when it comes to Israel and made plain that the U.S. will veto any UN Security Council action against Israel. Yet, she continues to demand that Palestinians negotiate with their oppressor and occupier. This is akin to asking a domestic abuse victim to negotiate with the abuser with the courts and police openly and fully supporting the actions of the abuser."

"Notably, both [Vice President Joe] Biden’s and Clinton’s speeches demonstrate the growing strength of the BDS movement," she said, referring to Boycott, Divestment and Sanctions, a global grassroots campaign that seeks to use peaceful economic mechanisms to pressure Israel to comply with international law and respect Palestinian human rights.

In their remarks at AIPAC, Buttu added, both Clinton and Biden "implicitly acknowledged that the world has recognized that Israel must be isolated for its continued denial of freedom to Palestinians and that the BDS movement is having a strong impact on Israel and its supporters."

Ahmad Tibi, one of the very few Palestinian legislators in Israel's parliament the Knesset, also slammed the hawkish former secretary of state for her comments.

"Her embrace of Israel is reminiscent of Western leaders shoring up apartheid South African leaders decades ago," he added.

"Quite frankly, her views on Israel are antiquated. Israel is a country hunkering down and isolating itself from progressive values of equality and freedom by continuing to build illegal settlements on stolen land and enforcing over 50 discriminatory laws for Palestinian citizens of Israel," Tibi added.

The Israeli human rights organization Adalah has documented more than 50 laws enacted since 1948 that "directly or indirectly discriminate against Palestinian citizens of Israel in all areas of life."

"Clinton's determination to link America so closely to an Israel reverting to the apartheid and colonialism abandoned by much of the world," Tibi concluded, "suggests she will be incapable as a world leader in standing up to Israeli expansion and insisting on freedom for Palestinians."