After Brussels, far-right Islamophobes are doing exactly what ISIS wants them to do: threatening the "gray zone"

ISIS hopes to destroy the "gray zone" in which Muslims are accepted; anti-Muslim demagogues are helping them do it 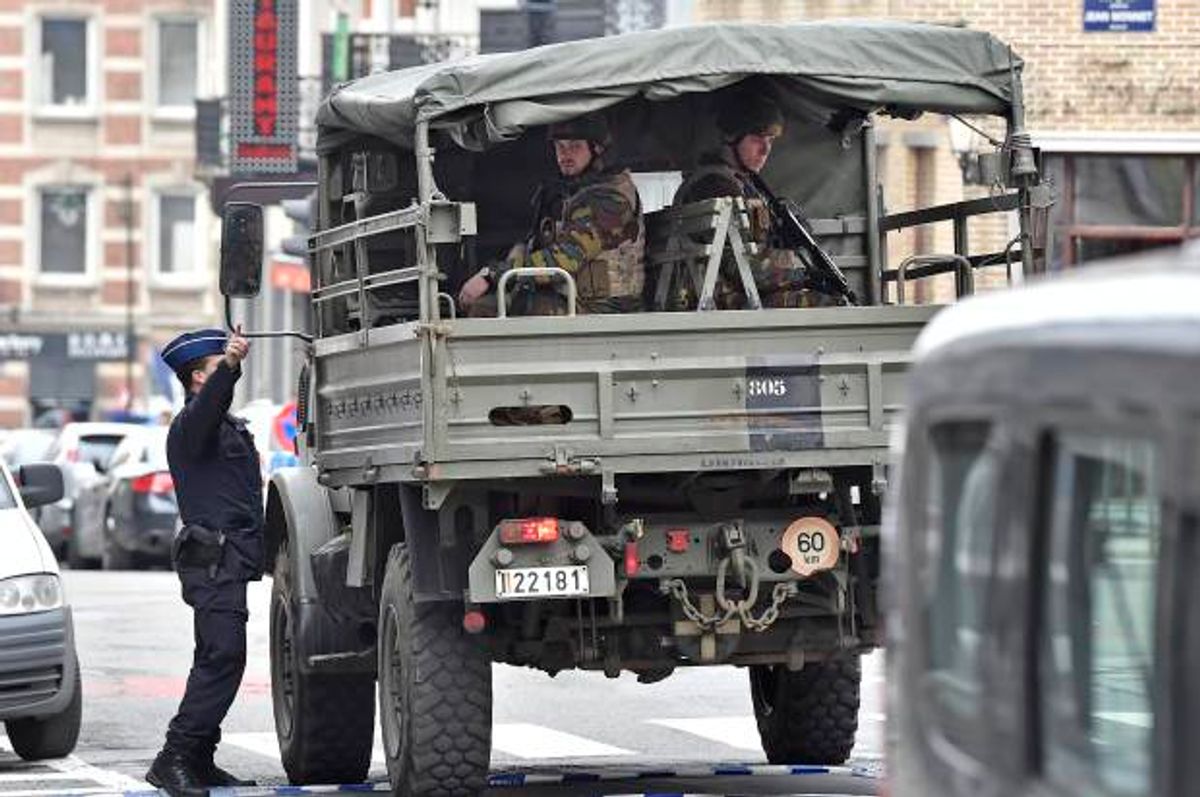 Police and military patrol the city center in Brussels, Belgium after attacks claimed by ISIS, on Tuesday, March 22, 2016 (AP/Martin Meissner)
--

ISIS took credit for a horrific series of bombings in Brussels, Beligum on Monday which killed at least 30 people.

Even before the extremist group claimed responsibility, anti-Muslim sentiment exploded. The hashtag #StopIslam was trending globally on Twitter.

As has become painfully customary, the double standards in the discussion of the attacks were immediately apparent. When white right-wing extremists massacre people at a women's health clinic, bomb a federal government building in Oklahoma City or fly a plane into an IRS building in Austin, Texas, white right-wingers are not immediately blamed. But when Islamic extremists kill people, not only are the world's 1.7 billion Muslims collectively blamed, their 1,500-year-old religion is too.

What is even more insidious — and dangerous — about this predictable anti-Muslim, racist, xenophobic response, however, is not just how hateful and destructive it is. The fact of the matter is that Islamophobes are directly playing into ISIS' hands.

"Extinction of the Grayzone"

ISIS has explicitly stated that its goal is to eliminate what it calls the "gray zone," the space within which Muslims are accepted in the West. The so-called Islamic State wants all of the world's Muslims to accept its violent, extremist distortion of religion, and purposefully inflames anti-Muslim, racist and xenophobic sentiment in the West in hopes of pressuring them to do so.

In the February 2015 edition of its online magazine Dabiq, ISIS published a 13-page article titled "The Extinction of the Grayzone."

"The grayzone is critically endangered, rather on the brink of extinction," the extremist group wrote in the feature. "Its endangerment began with the blessed operations of September 11th, as these operations manifested two camps before the world for mankind to choose between, a camp of Islam — without the body of Khilāfah to represent it at the time — and a camp of kufr — the crusader coalition."

This passage demonstrates exactly how Islamophobes serve ISIS' propaganda. Osama bin Laden himself, the founder of al-Qaeda, favorably quoted former President George W. Bush's bifurcation of the world into us and them.

In the article on the gray zone, ISIS went on to accuse Muslims who backed Bush's so-called War on Terror as having "rushed to serve the crusaders led by Bush in the war against Islam."

Moreover, ISIS admitted that the Western-backed militarism in the Middle East following Sept. 11, 2001 that went hand-in-hand with this surge in Islamophobia is directly responsible for further "withering" of the gray zone.

The extremist group boasted that the expansion of the Islamic State of Iraq into the Levant ("al-Sham," the second S in ISIS, refers in Arabic to the Levant, not just to Syria) brought "the grayzone to the brink of permanent extinction."

The disastrous U.S. war in Iraq decimated Iraqi society, leading to the deaths of more than 1 million people and fueling the rise of extremism. When ISIS moved into the catastrophic war in Syria, it began to radicalize fighters there.

In its article, ISIS wrote that the different factions of extremist Islamist groups fighting in Syria "began to split into two camps" — ISIS and the extremist Islamist groups "backed by the crusaders, apostate regimes, and deviant movements," namely groups like Syrian al-Qaeda affiliate al-Nusra, which have been supported by Western allies Saudi Arabia, Qatar and Turkey.

"Those who tried to preserve the gray zone for different partisan interests found the grayzone withering rapidly before them, as their sincere soldiers abandoned them to join the Islamic State," ISIS said.

"This division found its way quickly into different lands, as sincere mujāhidīn saw their former leaders fearful of losing power and influence rushing to futilely resuscitate the grayzone, even if it necessitated supporting the interests of the secularist, nationalist, and heretical parties waging war against the Islamic State on behalf of the crusaders and Arab apostate regimes," the extremist group continued.

ISIS also went on in the article to boast about how its attacks in Europe have generated more and more fear, even while killing less people than those massacred in the 2004 and 2005 attacks in Madrid and London.

"So why was the reaction to the recent attacks much greater than that of any previous attack? It is the international atmosphere of terror generated by the presence of the Islamic Khilāfah," ISIS bragged in its online magazine.

It called for more attacks on civilians in the West, insisting "the time had come for another event — magnified by the presence of the Khilāfah on the global stage — to further bring division to the world and destroy the grayzone everywhere."

One does not need to be an expert in order to understand what ISIS is doing in its attacks on innocent people in places like Brussels and Paris. The extremist group makes its goals, logic and strategy absolutely clear.

Islamophobic leaders like Trump and Cruz — who just hired as a foreign policy adviser far-right anti-Muslim conspiracy theorist Frank Gaffney, who openly calls for a neo-McCarthyist movement against Muslims — calling for even further surveillance and oppression of Muslims in the West, or average citizens happily parroting phrases like "stop Islam," these actions effectively help ISIS fulfill its sadistic goals.

This is precisely what happened after the November 2015 Paris attacks. As Salon noted at the time, it is right-wing extremists and Islamic extremists who both benefit from ISIS' heinous atrocities. Although implacable enemies, the two share an ironic congruence of interests.

The growing far-right and even neo-fascist movements in Europe and the U.S. — exemplified by figures like Trump and Cruz in the U.S., or Marine Le Pen and the National Front in France, or Geert Wilders and the Party for Freedom in the Netherlands, or Jobbik in Hungary, the list goes on — use ISIS' attacks as supposed "evidence" that there is no room for Muslims in the secular West.

Extremist Islamist groups like ISIS, on the other hand, will use this stifling Islamophobic climate to bolster its claim that there is no room for Muslims in the secular West.

If and when far-right leaders kick out Muslim refugees — asylum-seekers who are fleeing the very same acts of terror ISIS carried out in Brussels — ISIS will force these refugees to join its ranks, or kill them.

Salon argued after the Paris attacks that these two opposing yet similar groups would profit. This prediction turned out to be correct.

The far-right National Front — a party that was founded by a neo-Nazi Holocaust denier, one a Paris court ruled in 2014 is fair to call "fascist" — may now be France's most popular political party, and is poised to take state power in the next election.

Still today, four months later, the French government maintains an anti-democratic state of emergency in which Muslims feel unsafe and unwelcome. This only further contributes to an atmosphere of radicalization, hatred and violence — and, in turn, exacerbates the problem.

It is a dangerous positive feedback loop.

Peter Bouckaert, emergencies director for Human Rights Watch, pointed out that "hundreds of thousands of people who are fleeing from the exact same terror that these radicalized youth are bringing to Europe now."

"It's unfortunate that in many European minds and minds across the world, the two crises have become conflated, and refugees themselves have become to be seen as a security threat," Bouckaert said.

"We should take a slightly longer-term historical perspective and see what happened after the United States during the Bush administration overreacted very strongly to the 9/11 attacks," the Human Rights Watch official added. "Many of the problems that we face today are at least related to that overreaction."

"The security response has to be proportionate, and it's important that it doesn’t target people who have nothing to do with this," he continued, calling for "the underlying social issues in Belgium and France and other European countries, the marginalization and the joblessness and hopelessness in some of these communities, [to be] addressed."

Bouckaert warned: "An overreaction will just feed into the extremism that we saw hit Brussels today."

Approximately one-quarter of the world's entire population is Muslim — 1.7 billion people. The vast majority of the victims of ISIS are themselves Muslim. By blaming ISIS on Muslims and Islam, Islamophobes are only helping ISIS further recruit and grow.