Anti-Zionism does not equal anti-Semitism: Someone please tell Hillary Clinton and the University of California

U.C. is at it again, with its deceptive attempt to thwart criticism of Israel. Plus. Hillary is all-in with Israel 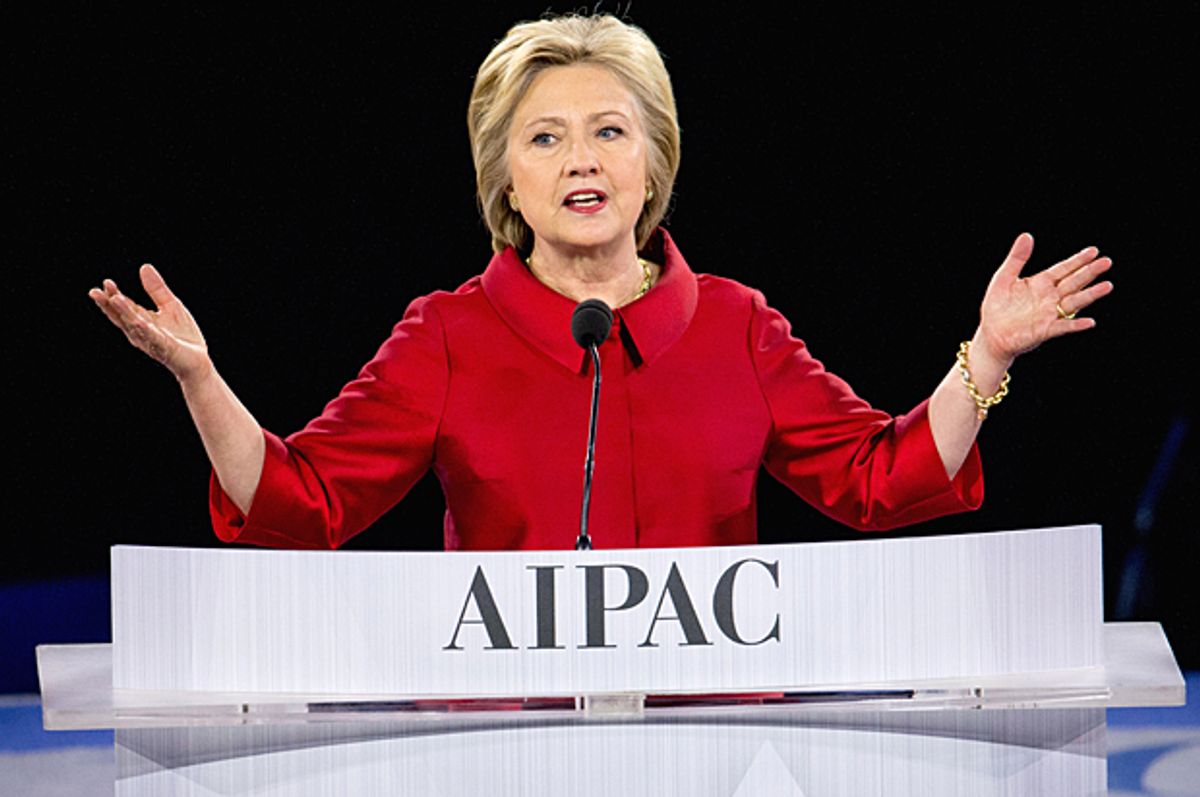 Last summer there was a flurry of activity in the University of California system as U.C. regents were pressured to suppress criticism of Israel on U.C. campuses. One regent in favor of such silencing played a trump card: He threatened to bring his particularly well-connected partner in to add muscle. The regent was wealthy developer Richard Blum, his wife is Sen. Dianne Feinstein. Here is what Blum said in September:

I should add that over the weekend my wife, your senior Senator, and I talked about this issue at length. She wants to stay out of the conversation publicly but if we do not do the right thing she will engage publicly and is prepared to be critical of this university if we don’t have the kind of not only statement but penalties for those who commit what you can call them crimes, call them whatever you want. Students that do the things that have been cited here today probably ought to have a dismissal or a suspension from school. I don’t know how many of you feel strongly that way but my wife does and so do I.

So now a U.S. senator says she'll use the power of her office to suspend undergraduates for speaking out against Israeli state policies? Interesting read of her mandate.

Blum was particularly incensed because just a few months before, free speech and pro-Palestinian activists had won a victory. As I wrote back then:

For a while it looked like on July 23 the regents of the University of California were going to adopt the U.S. State Department definition of anti-Semitism and in some fashion or another put policies into place that would have a severe impact on what can and cannot be said about Israel on each of the 10 U.C. campuses, which together enroll some 230,000 students. Those students, along with 190,000 faculty and staff, would all be constrained under the regents’ interpretation of the definition.

The decision would in fact be continuing a process that began in 2012, when the California House passed a resolution condemning anti-Semitism (HR35), and continued into this past spring, when the Senate passed a similar resolution (SCR35). The stage was set, the momentum was there, activists and advocates on both sides were ready to march on the regents meeting in San Francisco and address the regents and U.C. president Janet Napolitano.

But just before the regents were to meet, it was announced that they had decided to drop the matter entirely and instead to have a discussion about “tolerance” in general at their meeting in the autumn.

Since the autumn there has been speculation as to what, exactly, the regents would vote on; how would “tolerance” be defined? Well, now we know, and the document under discussion still shows the two main perspectives of the prior discussions. We see efforts to produce a broad and positive statement for tolerance, and also the fingerprints of those who wish to smuggle in a false and destructive equation of anti-Semitism with anti-Zionism, thereby making the University of California a place where any criticism of a certain state’s illegal policies is intolerable.

The manner in which this is done in the current draft is deceptive and underhanded.  In the main body of the text, the rightful condemnation of anti-Semitism is clear and unadorned: “In a community of learners, teachers, and knowledge-seekers, the University is best served when its leaders challenge speech and action reflecting bias, stereotypes, and/or intolerance. Anti-Semitism and other forms of discrimination have no place in the University. The Regents call on University leaders actively to challenge anti-Semitism and other forms of discrimination when and wherever they emerge within the University community.”

Fair and good. But in the introduction to the document we find the proposal for tolerance when it comes to anti-Semitism presented this way: “Anti-Semitism, anti-Zionism and other forms of discrimination have no place at the University of California.” This portion of the document, separated from the section where the proposals appear, is couched as a “contextual statement.” Thus a casual reader could endorse the proposal itself while being unaware that the entire framing of the discussion of anti-Semitism is being used as a cover for silencing voices protesting state policies that might include, among other things, the continued demolition of Palestinian homes and the building of illegal settlements, which have been publicly condemned by the U.S. State Department and which are part of a Zionist project. What this means is that if the U.C. proposal passes, the U.S. State Department can protest illegal settlements and the Occupation as a whole, but students and teachers in the U.C. system cannot.

This sleight of hand has been called out by both activist groups and mainstream news sources such as the Los Angeles Times. California Scholars for Academic Freedom (disclosure—I am a member) states: “For the record, we wish to underscore that criticisms of Zionism are co-extensive with the history of Zionism and have from the start included Jewish voices from a variety of political and religious orientations. The inclusion of such a broad category as either intolerant or bigoted represents a fundamental misunderstanding of the political viewpoints critical of Zionism. Many political positions, including those that favor Palestinian rights, statehood, and political self-determination, can be considered anti-Zionist although they comply with internationally accepted norms of human rights and principles of democratic self-governance.”

The Los Angeles Times editorial notes that the document

conflates anti-Semitism with anti-Zionism and says both are forms of discrimination that “have no place at the University of California.” It's difficult to read that as anything other than a warning to those students or faculty members who have fundamental disagreements with the state of Israel. .. The equation of anti-Zionism with anti-Semitism might also make it easier to stigmatize protests against Israeli policies — particularly the treatment of Palestinians — even if they don't actually oppose the idea of a Jewish state. Pro-Palestinian activists on campus are right to fear that such a statement would target their advocacy even when it doesn't involve anti-Semitic language or harassing behavior.

This issue is not a matter of splitting hairs; it goes to the heart of issues of free speech, and the exercise of power to suppress certain types of political expression while letting others flow freely.

What is most telling about this latest episode is the tactic being employed. Faced with substantial public pressure from grass-roots activists, the regents’ working group chose this back-door route to insert its insidious equation. Now it has been called out, and we should be watching carefully which way the regents will move.

What is happening in California might well serve as an index to how these issues will play out on the national scene. The position of at least one of the two front-runners in the presidential elections is crystal clear. Hillary Clinton has consistently been one of Israel’s staunchest supporters. What is most troubling, however, is the fact that she has come out vocally as someone who will, in her own words, make “countering BDS a priority.” In a letter to potential donors she uses exactly the same equation of anti-Semitism with anti-Zionism that we find in the U.C. document:

I am writing to express my alarm over the Boycott, Divestment, and Sanction [sic] movement, or “BDS,” a global effort to isolate the State of Israel by ending commercial and academic exchanges.  I know you agree that we need to make countering BDS a priority. I am seeking your advice on how we can work together—across party lines and with a diverse array of voices—to reverse this trend with information and advocacy, and fight back against further attempts to isolate and delegitimize Israel….

I am also very concerned by attempts to compare Israel to South African apartheid.  Israel is a vibrant democracy in a region dominated by autocracy, and it faces existential threats to its survival.  Particularly at a time when anti-Semitism is on the rise around the world—especially in Europe—we need to repudiate forceful efforts to malign and undermine Israel and the Jewish people.

And on Monday, in her appearance before AIPAC (American Israel Public Affairs Committee), Clinton doubled down on her support of Israel.  As CommonDreams reports:

During the address, Clinton vowed to take the U.S.-Israel relationship to "the next level"—a level which seemingly includes more war and imperialism, few, if any, rights for Palestinians, and definitely no economic boycotts of Israel….Later, Clinton doubled down on her previous pledge to dismantle the growing international Boycott, Divestment, and Sanctions (BDS) movement, linking the campaign against Palestinian apartheid to anti-Semitism, saying "we must repudiate all efforts to malign, isolate and undermine Israel and the Jewish people.”
In a statement to Common Dreams, Rebecca Vilkomerson, executive director of Jewish Voice for Peace, said that the speech "is a reminder of the current limits of the mainstream discourse on Israel, which rely on racist and Islamophobic tropes to justify unquestioning support for Israel."

"From Democrats to Republicans, the message is the same," Vilkomerson continued. "More arms for Israel, a stronger relationship between Israel and the U.S., no mention of Palestinian rights, and no recognition of the impossible contradiction of being both democratic and Jewish when the state is predicated on maintaining systems of unequal rights and rule by military occupation."

This is deeply troubling, especially as the Palestinian cause has now been established as one of the most pressing human rights issues of our age.  Education on this issue therefore needs to be rigorous, debated, argued, in order for us to make informed decisions and take meaningful action. The suppression of ideas is anathema to the university, but this is exactly what is being suggested by reputed leaders in education and politics, all under this deceitful equation.