Mr. Trump goes to Washington: The surreal spectacle of a know-nothing GOP frontrunner

On an eventful day capped with an incoherent speech before AIPAC, Trump showed exactly why his campaign is so scary 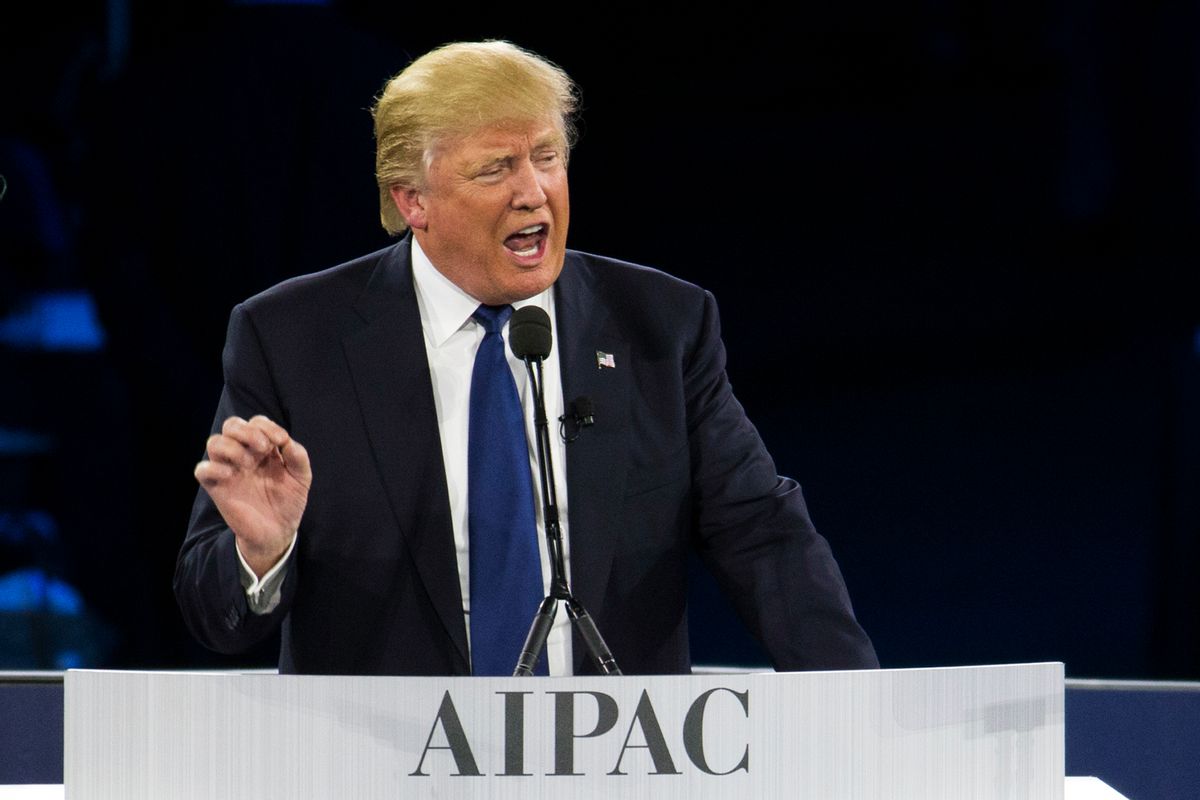 On Monday morning, millions of Sarah Palin fans woke up to an epic Facebook rant complaining that she and other Trump endorsers are being blacklisted by Washington insiders. This was apparently based upon some Breitbart News "reporting" which quotes some members of the conservative movement compiling a list of Trumpish apostates who will be denied membership in their club. This was somewhat ironic since the Trump campaign actually is keeping an enemies list of reporters it will not allow into its events. But such is the state of the conservative crack-up.  And it perfectly signaled the beginning of a very busy day. Donald Trump went into the belly of the beast, Washington D.C. --  and once again dominated the news cycle on the entire day before an election.

Trump started the morning with a trek to the Washington Post for an interview with the editorial board. The first question they asked was about his foreign policy team. Up until now he's said that he watches "the shows" and would listen to himself because he has "a very good brain." This time he named some people who are not know to be on the A-list, including a conspiracy theorist and Islamophobe and a former general who was dismissed for covering up Bush administration contracting corruption in Iraq and Afghanistan.

He whined like a tired toddler about how unfairly the Washington Post treats him and chattered excitedly about his new building project for some time. He babbled incoherently about how the country's debt was a bubble and said we need to charge foreign governments to protect them so we have money to rebuild at home. He was asked about the issues of African Americans and the police and said that the problem was unemployment -- he believes that black youth have a 58 percent unemployment rate. When pressed about whether there are racial disparities in law enforcement he affirmed his very, very strong support for the police and suggested they need to do whatever is necessary to prevent violence.

He promised to create economic zones and business incentives in the inner cities (he seems to think he just thought of that concept) but mostly he's convinced that the answer is to lift people's "spirit."

"I actually think I’d be a great cheerleader for the country. Because a lot of people feel it’s a hopeless situation. A lot of people in the inner cities they feel that way. And you have to start by giving them hope and giving them spirit and that has not taken place."

I'm sure his policy of having the cops bring the hammer down as hard as possible will be a great spirit lifter.

They asked him if he had any regrets about getting down in the dirt with all the "hands" business and he went on and on and on about it. This is just a short excerpt of what he had to say on the subject:

No, I had to do it. Look, this guy. Here’s my hands. Now I have my hands, I hear, on the New Yorker, a picture of my hands....A hand with little fingers coming out of a stem. Like, little. Look at my hands. They’re fine...My hands are fine. You know, my hands are normal. Slightly large, actually. In fact, I buy a slightly smaller than large glove, okay?

But this exchange with the publisher was downright chilling:

RYAN: You [MUFFLED] mentioned a few minutes earlier here that you would knock ISIS. You’ve mentioned it many times. You’ve also mentioned the risk of putting American troop in a danger area. If you could substantially reduce the risk of harm to ground troops, would you use a battlefield nuclear weapon to take out ISIS?

TRUMP: I don’t want to use, I don’t want to start the process of nuclear. Remember the one thing that everybody has said, I’m a counterpuncher. Rubio hit me. Bush hit me. When I said low energy, he’s a low-energy individual, he hit me first. I spent, by the way he spent 18 million dollars’ worth of negative ads on me. That’s putting [MUFFLED]…

RYAN: This is about ISIS. You would not use a tactical nuclear weapon against ISIS?

TRUMP: I’ll tell you one thing, this is a very good looking group of people here.  Could I just go around so I know who the hell I’m talking to?

That is not a typo or a garbled transcript. (You can listen to the whole interview here.) When Donald Trump was asked whether he would use nuclear weapons against ISIS, he said didn't want to "start the process of nuclear" then explained that he's a "counterpuncher," reminding them how he vanquished his rivals in the presidential primary. Then he noticed some attractive people in the room.

That's how his mind works. It's not normal.

But that was just the beginning of Trump's big day in D.C. After his "hands on" interview with the Post. he headed over to a private meeting with some current and former members of Congress, including Senator Tom Cotton, the audacious Arkansas freshman who wrote the embarrassing "Iran letter," Senator Jeff Sessions, former Senator Jim DeMint, disgraced former congressmen Newt Gingrich and Bob Livingston, Calista Gingrich and a small number of backbench Representatives. No one is quite sure what it was all about, but Trump had a press conference afterwards and seemed to believe it was a very, very impressive group.

That press conference rivaled his notorious Super Tuesday Trump brand infomercial. He talked about the building he's building for what seemed like hours, even discussing the bathroom fixtures at one point. A woman in the audience asked a question he seemed to like and he brought her up to the podium and promised to hire her on the spot. He said, "I looked at her, gut instinct, she asked a question and it was a positive question and she has a great look and she looks like a great person to me, I have instincts about people." This is the world famous business acumen he will bring to running the government.

He was asked about the violence at his rallies and he reiterated his claim that the protesters are very bad people and explained that the man who hit and punched a protester over the weekend had a wonderful family and was angry at a member of the Ku Klux Klan. (He actually beat a protester who was dressed in red, white and blue. A different protester was wearing a white hood to protest Trump's association with the Klan.)

He downplayed any threats from the GOP establishment to his campaign saying,

“I don’t see threats. I see people who are trying to go against me … I think they’re very misguided. I think the people who go against me should embrace me and then I would embrace them very easily ... If they don't embrace me, then it's a threat... There has never been an event like what we're going through in the history of politics -- people are talking about this all over the world."

He's right about that, but one suspects he may not fully comprehend the horror with which his campaign is being greeted here and around the globe.

With that bizarre public appearance under his belt Trump popped over to CNN's studios for an interview with Wolf Blitzer as part of their evening special with the "Final Five" candidates. He said the usual stump speech nonsense and was typically unresponsive. He did take the opportunity to thoroughly trash Fox News's Megyn Kelly, saying that he must "let people know that she's a third rate talent." But he assured the nation "nobody respects women more than I do. Nobody will take care of women better than I do," so that's a relief.

And just hours away from delivering a big speech for which he used a teleprompter, he took a shot at Hillary Clinton for using a teleprompter.

That big American Israel Public Affairs Committee speech was heavily anticipated among the political media, mostly because everyone wondered if Trump could give a prepared speech. And yes, there was some curiosity about whether he would go before such a typically hawkish crowd and repeat his claim that he would stay neutral between the Israelis and Palestinians. He did not do that. Instead, his Israel policy, if you can call it that, was pretty much GOP boilerplate. And despite the fact that he delivered it via teleprompter it was just as puerile and self-centered as any interview or stump speech he's ever given.

His most notable line (after his bragging about taking the huge physical risk to be the Grand Marshall of New York City's Israel Day parade in 2004) was this one:

My number one priority is to dismantle the disastrous deal with Iran. I have been in business a long time. I know deal making. And let me tell you this deal is catastrophic, for America, for Israel and for the whole middle east. We've rewarded the world's leading state sponsor of terror with 150 billion dollars and we received absolutely nothing in return.

I’ve studied this issue in great detail. I would say actually greater, by far, than anybody else, believe me. Oh believe me

The audience roared with laughter. He may be able to convince some of the people at his rallies that he knows what he's talking about in foreign affairs, but the AIPAC crowd isn't fooled about his knowledge of Israel and Iran. Nonetheless, they gave him a polite reception. He didn't challenge the status quo in any way so it was a successful speech for him. But would it have really mattered if it wasn't?

All in all, Donald's Big Washington Adventure succeeded in doing what what he set out to do. He had the press corps following him all over town like a bunch of One Direction fans hanging on his every silly boast and ignorant rant. Today he will probably win a bunch more delegates to the Republican convention thus proving once again that it doesn't matter what he says it only matters that he says it on TV.