NBC's coverage of the Brussels attack was stunningly irresponsible

The "Today" show talked to Trump & Clinton about the Brussels attack, and lived down to our expectations 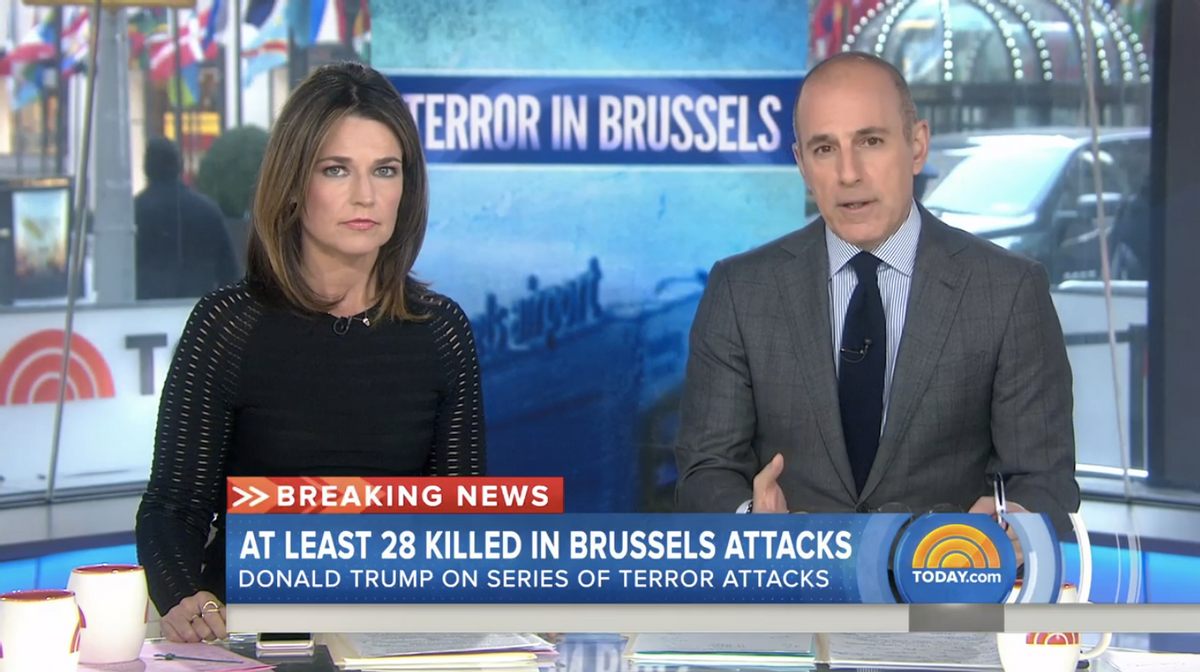 Horrific attacks like the one that took place in Brussels on Tuesday morning tend to bring out the worst in our elite media. The coverage usually combines the blind panic and speculation that accompany any major breaking news story with an unrelenting stoking of our most vengeful, authoritarian impulses. Tuesday's news channels were filled with the usual scenes: an array of mostly white men speaking ominously of "soft targets" and of endless war. Most of these outlets like to pretend that calling one of these inevitably gung-ho hawks a "national security analyst" or a "law enforcement expert" somehow makes that person a non-ideological expert. Really, all it does is highlight just how narrow our conversation about terrorism and war tends to be. (Talk of peace stays far away from any table.)

A particularly nauseating example of the media's approach to such matters could be seen in a pair of interviews that NBC's "Today" did with presidential frontrunners Donald Trump and Hillary Clinton. In particular, both interviews contained such irresponsible and morally bankrupt conversations about torture that you wanted to throw something at the television.

Trump was, of course, despicable, offering not even a single word of condolence to the victims of the attack. But what was worse was the questions Matt Lauer and Savannah Guthrie put to him. Challenging they were not. All of the "Today" show's queries were framed so as to get Trump to illuminate just how far he would go in his efforts to combat such attacks, rather than grilling him whether that approach was either right or proper.

In a particularly disgusting back-and-forth, both anchors quizzed Trump on whether or not he would torture Salah Abdeslam, the alleged ringleader of the Paris attacks who was captured by Belgian authorities a few days ago.

"What would you say would be appropriate in terms of what they can do to him at this moment to get any information that they can about possible further attacks?" Lauer asked. "When you say do whatever they have to do, can you be specific?" Guthrie followed up. She then bluntly asked him if he thought that torture worked. Trump, unsurprisingly, said that he did.

Nowhere in this conversation was there any suggestion that torture is an obscenity, that the very fact that two of the most high-profile journalists in the United States were speaking so casually with the likely Republican presidential nominee about torture on national television was symbolic of America's moral degradation. The closest Guthrie got to any of this was when she said that "some people think that kind of harsh interrogation technique works...and others say that it doesn't work." What a brave stance.

The show also spoke to Hillary Clinton by phone later in the morning. Clinton had declined to come on, but Trump's willingness to phone in must have made her reconsider. Lauer and Guthrie were no better in their approach to her. Every single question came from a hawkish angle.

"Could something like this happen here?" Guthrie asked. "Is this something that people should fear?" Lauer then had this doozy of a question about torture and surveillance:

"It seems, Secretary Clinton, that information is so vital when it comes to combatting terrorism, and that is why perhaps—perhaps—you hear some people say when you get a key suspect like the one who was taken into custody in Brussels last Friday, maybe you should use some enhanced techniques to get information out of that person. It also may be why, if you look at this country in the wake of the San Bernardino shootings that you just brought up, a lot of people say, 'wait a minute, Apple, you've got to unlock that phone that was left behind by one of the shooters because it's crucial that we get that information.' Is that simply just a logical step that people take after events like this, and do you agree with it?"

It would be difficult to find a better example of a question that was at once so objectionable and so fact-free. Clinton—whose speech before AIPAC on Monday was a timely reminder of just how unrelenting she can be in her bellicosity—declined the chance to give a ringing condemnation of torture, saying merely that it wasn't one of the "tools" that law enforcement should be using because it wasn't effective. She also chided Europe for not being as hawkish in its security response to terrorism as she had wanted it to be. "They were reluctant to impose the kind of strict standards [the United States was] looking for," she said.

NBC was by no means an outlier in any of this. Clinton and Trump spoke to other networks, and got many of the same kinds of questions put to them. It was all a deeply depressing spectacle, and a reminder that, all too often, our most prominent journalists react to the worst events in the worst way possible—and that our discourse around torture remains as terrible as it's ever been.