Clinton's speech was full of distortion, belligerence and uncritical support of Israel, totally ignoring its crimes 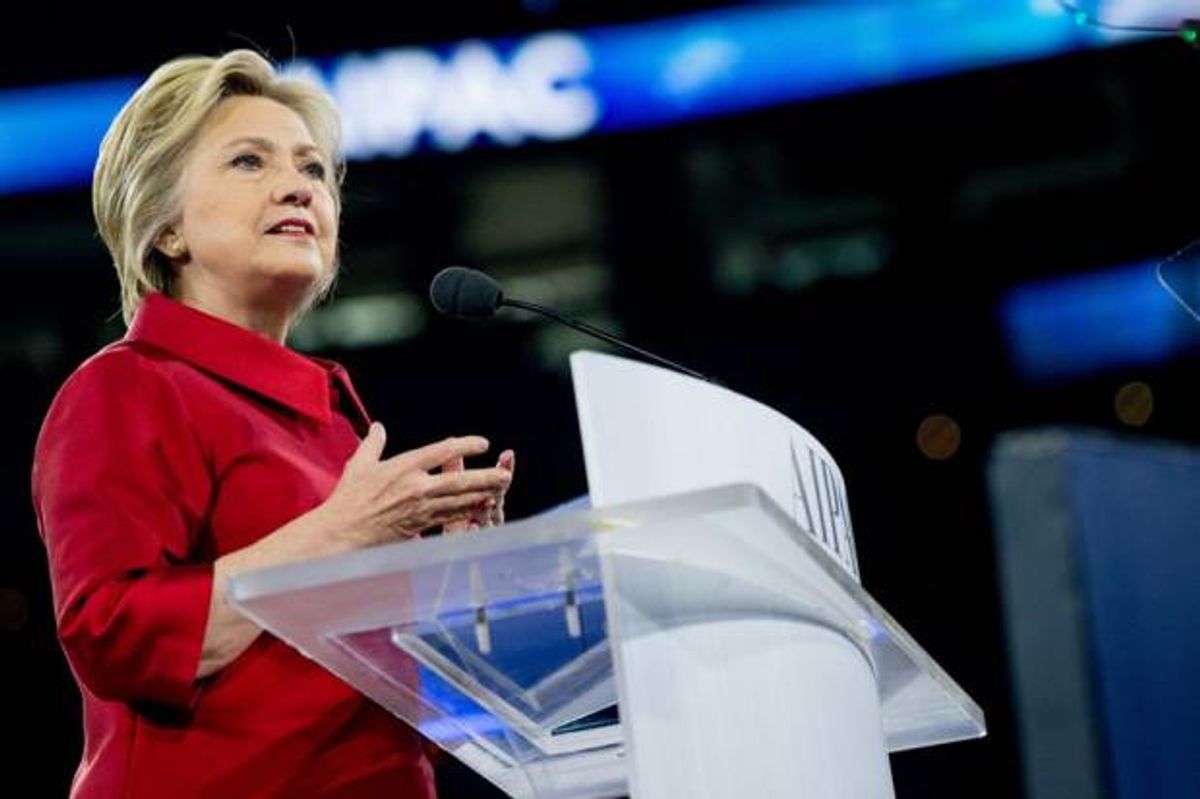 Hillary Clinton has always been hawkish about the Middle East, but she took her belligerence to a new level in her speech at the annual conference of the American Israel Public Affairs Committee on Monday.

Much of the rhetoric of the Democratic presidential front-runner sounded indistinguishable from that of a neocon. Some viewers even compared her to hard-line right-wing Israeli Prime Minister Benjamin Netanyahu.

"The United States and Israel must be closer than ever, stronger than ever," Clinton declared. "We must take our alliance to the next level," she said, calling for "even more intense security and diplomatic cooperation" and demanding that the U.S. arm the Israeli military "with the most sophisticated defense technology."

American taxpayers already give approximately $3.1 billion in military aid alone to Israel every year. The U.S. also ensures that its close ally has complete political impunity at the United Nations, where the U.S. has vetoed scores of Security Council resolutions on Israel's behalf.

Clinton is positioning herself to be the most pro-Israel candidate in the presidential campaign. Her speech to the American Israel Public Affairs Committee, or AIPAC — the most influential pro-Israel lobbying group in the U.S. — was laden with cheerleading for the Israeli government.

She affirmed her staunch support for the organization — which is notorious for its equally staunch support for right-wing policies, such as its vehement opposition to the Iran nuclear deal — and spoke glowingly of "the privilege of working closely with AIPAC members to strengthen and deepen America's ties with Israel."

The audience loved it. Her 4,000-word speech was interrupted 55 times by applause.

Clinton's speech was overtly biased in countless ways. She spoke in detail of violence endured on Israel's side, but made no acknowledgment whatsoever of Israel's many crimes against the indigenous Palestinian population.

Since 1967, Israel has military occupied Palestinian territories in direct violation of international law. Clinton did not mention Israel's illegal military occupation once in her prolix address.

In the almost five decades since the illegal occupation began, Israel has slowly colonized Palestinian land with ever-expanding settlements. Today, there are more than 600,000 Israeli settlers living in the occupied territories, in flagrant contravention of rulings by the United Nations.

Clinton acknowledges settlements just one time in her 4,000-word speech — and, even then, only in passing. The U.N. General Assembly, along with countless experts, has deemed Israel's expansion of illegal settlements to be a principal obstacle to peace, but Clinton clearly did not feel the enormous and growing problem was important enough to mention.

None of this is even to mention the Nakba, the violent ethnic cleansing of historic Palestine in 1947 and 1948, in which approximately two-thirds of the indigenous Arab population was forcibly removed from the land by the militias that founded Israel. Prominent Israeli historian Ilan Pappé has documented how Israel's founding fathers intentionally ethnically cleansed the country to create a new state.

Today, there are more than 5 million Palestinians refugees throughout the world. Most are unable to return to their homeland. Their existence was not even acknowledged by Clinton, who in her speech lionized former Israeli Prime Minster Golda Meir as a sign of Israel's supposed progressivism, while failing to mention that Meir infamously claimed that there "was no such thing as Palestinians" — while simultaneously blaming this ostensibly imaginary people for "forcing us to kill their sons."

Clinton's double standards were blatant in her discussion of the violence in Israel-Palestine.

She condemned "Hamas rockets" in the summer 2014 war with Gaza, but glossed over the more than 2,250 Palestinians killed by the Israeli military, roughly two-thirds of whom were civilians, including more than 550 children, according to the U.N. — not to mention the fact that leading human rights organizations including Amnesty International and independent investigations by experts accused the Israel Defense Forces of intentionally targeting civilians and committing war crimes.

Clinton also mentioned the Israeli victims of "terrorist bombs," but utterly ignored the thousands upon thousands of Palestinian civilians who have been killed by the Israeli military in recent years — in Israel's 2009, 2012 and 2014 wars in Gaza, along with its periodic bombings in times of so-called peace.

"Israel faces brutal terrorist stabbings, shootings and vehicle attacks at home," Clinton said in her speech, but failed to mention the much larger violence Palestinians endure under the illegal Israeli military occupation that she completely ignored.

In fact, just one day before Clinton spoke at AIPAC, the home of relatives of the Palestinian Dawabsheh family killed by Israeli extremists, key witnesses in the case, was also set on fire.

Clinton accused Palestinian leaders of "inciting violence" and "celebrating terrorists as martyrs." Once again, however, she utterly ignored the many instances of Israeli leaders inciting violence. In May 2015, former Foreign Minister Avigdor Lieberman called for beheading "disloyal" Palestinian citizens of Israel.

As for "celebrating terrorists," in February 1994, Jewish extremist Baruch Goldstein massacred 29 Muslim worshipers at the religious site the Cave of the Patriarchs. Today, Goldstein is seen as a martyr. His grave is a popular pilgrimage site for Israelis; its epitaph describes the Israeli terrorist as a man of "clean hands and a pure heart" who "gave his life for the people of Israel."

In Clinton's world, Palestinians are responsible for all of Israel's woes. Although she fearmongered about the militant Palestinian party Hamas, she failed to mention that it was only created in 1987 — two decades after the beginning of the illegal Israeli military occupation.

She also ignored the fact that, when Hamas was first forming, the Israeli government secretly supported it, in order to undermine the secular socialist militant groups that dominated the Palestinian resistance.

Bernie Sanders is the only presidential candidate who turned down an invitation to speak at AIPAC. The Vermont senator, a self-declared democratic socialist, has — unlike virtually every other prominent U.S. politician — promised to pursue a "level playing field" in Israel-Palestine.

Clinton took a sharp jab at the fellow presidential candidate for his pledge to be neutral.

In Clinton's view, neutrality is a bad thing. Die-hard support for Israel is the only option — "the alternative is unthinkable," she declared at the AIPAC conference.

"I feel so strongly that America can't ever be neutral when it comes to Israel's security," Clinton said, flatly insisting that anyone who insists on being neutral "has no business being our president."

"So many Americans feel such a deep emotional connection with Israel," she added. "I know that I do. And it’s why we cannot be neutral about Israel."

Clinton also doubled down on her pledge to rebuilt ties with Netanyahu, who has had a few skirmishes with President Obama in recent years. "One of the first things I'll do in office is invite the Israeli prime minister to visit the White House," she promised, recalling the open letter she published in November 2015, reaffirming the U.S.'s "unbreakable bond with Israel — and Benjamin Netanyahu."

Netanyahu was reelected on the promise that there would never be an independent Palestinians state (this did not stop Clinton from insisting in the speech that a two-state solution is the "only" way to resolve the conflict). In the March 2015 election, he blatantly appealed to racism, imploring Jewish citizens of Israel to go vote for the right-wing, because the left, he claimed, was supposedly busing Arab citizens out to vote "in droves."

With decidedly conservative language, Clinton described Israel as "a bastion of liberty."

She boasted about the annual LGBTQ pride parade held in Tel Aviv, Israel. She did not mention that multiple people were stabbed at the 2015 pride parade in Jerusalem by a Jewish extremist. The assailant, who had recently been released from prison, had also stabbed three more people at the 2005 pride parade.

Characterizing BDS as part of "the growing effort to delegitimize Israel on the world stage," Clinton called the peaceful international grass-roots movement "alarming," and even implied that it is anti-Semitic.

"We have to be united in fighting back against BDS," Clinton declared, applauding the young people at AIPAC for being "on the front lines of the battle to oppose" it.

She claimed pro-Israel college students face censorship and intimidation on American campuses. In reality, it is the complete opposite that is true.

In perhaps the most topsy-turvy moment in her garrulous address, Clinton characterized the Palestinians as "the oppressor" and Israel as "the victim," citing Elie Wiesel, who declared that "Neutrality helps the oppressor, never the victim. Silence encourages the tormentor, never the tormented." (The quote would apply perfectly if the roles Clinton proposed were reversed, to reflect actual reality.)

Her speech was characteristically hawkish in numerous other ways.

Clinton reserved particular vitriol for Iran. She devoted more than 600 words to fearmongering about the country, which she characterized as an "existential danger."

She boasted that she "led the diplomacy to impose crippling sanctions" on Iran, and thanked AIPAC for tirelessly working to help "build a global coalition to impose the toughest sanctions in history."

The former secretary of state also openly called for the U.S. to "distrust" Iran, and asserted that it must "continue to enforce existing sanctions and impose additional sanctions as needed."

Some analysts have argued that sanctions are "not an alternative to war, but a form of war in and of themselves." The sanctions the U.S. pressured the United Nations to impose on Iraq in the 1990s led to the deaths of more than 500,000 children, according to the U.N. Moreover, despite the Clinton administration's promise at the time that they would do the contrary, the sanctions in fact strengthened Saddam Hussein.

Sanctions would by no means be her limit, however. Clinton also assured the conference that she would consider using military force against Iran, if she saw fit.

"Candidates for president who think the United States can outsource Middle East security to dictators," Clinton additionally asserted, "are dangerously wrong." What she failed to acknowledge is that most of the dictators in the Middle East in fact are close allies of the U.S.

The monarchies in the Gulf are among the most authoritarian regimes in the world, and are America's good friends. Jordan, another monarchy, is allied with the U.S., as is the brutal military dictatorship in Egypt, which has extrajudicially killed thousands of protesters and thrown tens of thousands of people in prison since overthrowing Egypt's first democratically elected government, with the support of the U.S., in 2013.

And one of the principal ways in which the U.S. government justifies its relationships with these draconian regimes, in fact, is through an appeal to "security" and "stability."

Iran is a repressive regime, but is nowhere near as autocratic and extremist as the theocratic totalitarian absolute monarchy in Saudi Arabia, to which the U.S. is very closely allied. Clinton did not make a single mention of the Saudi regime in her approximately 4,000-word speech.

True to her hawkishness, Clinton openly called for a strong U.S. empire. "We need America to remain a respected global leader, committed to defending and advancing the international order," she proclaimed.

Clinton even asserted that the U.S. should act unilaterally, even if it must fly in the face of the international community. "I would vigorously oppose any attempt by outside parties to impose a solution," she said, "including by the U.N. Security Council."

The rhetoric of the former secretary of state — who, virtually single-handedly, helped push for the disastrous NATO war in Libya — was so hawkish, Clinton was compared to Netanyahu.

"I literally could be listening to Bibi Netanyahu right now at AIPAC," noted Naomi Dann, media coordinator for the group Jewish Voice for Peace, and it "wouldn't sound any different than Hillary Clinton."