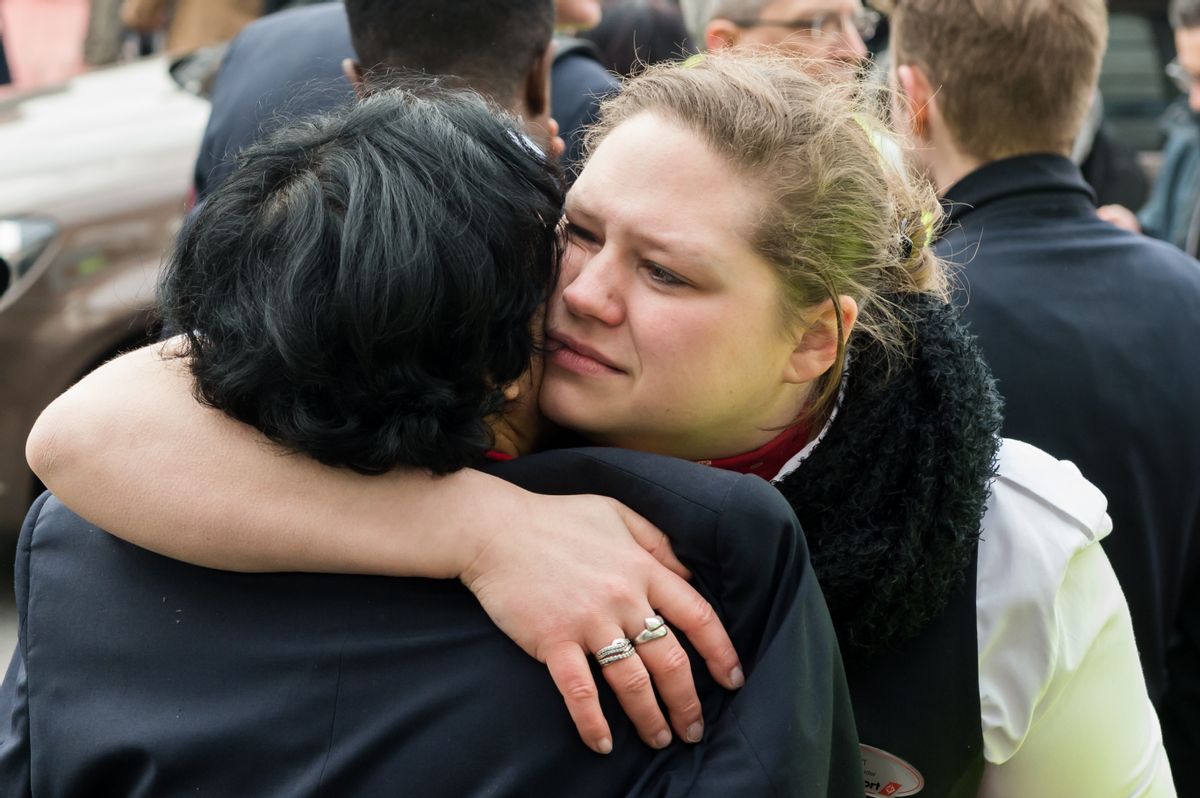 Three separate explosions were reported — two at the Brussels Airport and a third at a metro station in the Maelbeek neighborhood in downtown Brussels. The station is underground, beneath the headquarters of the European Union, of which Brussels is the de facto capital.

The subway explosion claimed the lives of 20, with the airport explosions claiming an additional 14. As many as 230 injuries have been reported.

The Airport and subways have suspended operations in fear of more attacks. The Associated Press reported that a senior Iraqi security official confirmed, "Daesh (IS) was behind this operation and it was planned in Raqqa two months ago and there are three suicide attackers who will carry out another attack."

Belgian media have circulated a security camera still (below) of three alleged suspects in the airport bombings. The man in the hat to the far right is of particular interest to police because he is believed to be still at-large, while the other two "very likely committed a suicide attack," according to Belgian federal prosecutor Frederic Van Leeuw:

At the Airport, police found and subsequently detonated a third bomb that hadn't gone off, according to ABC News editor Jon Williams:

“We were fearing terrorist attacks, and that has now happened,” said Belgium Prime Minister Charles Michel.

"Faced with these blind and cowardly attacks, we are united and together," Michel added. "Our priority is the victims and securing the country.

Speaking from Cuba, President Obama called the attacks, "yet another reminder that the world must unite."

"We must be together, regardless of nationality or race or faith, in fighting against the scourge of terrorism," Obama continued. "We can and we will defeat those who threaten the safety and security of people all around the world."

Bernie Sanders, too, offered his condolences:

Hillary Clinton spoke to Wolf Blitzer on CNN Tuesday afternoon, saying the U.S. should "coordinate" its anti-terrorism efforts with Western allies and "keep working with Muslim nations" to stop ISIS.

"You can build a wall around your country," she said, an apparent reference to Donald Trump's infamous immigration quick-fix, "but you can't keep out the Internet."

Among the hundreds of injured victims were three mormon missionaries from Utah: Richard Norby, 66; Joseph Empey, 20; and Mason Wells, 19. Other Americans injured include former-Oakland University basketball player, Sebastian Bellin, and an unnamed service member and his family.

Update: In search of the third bombing suspect, who is still believed to be at-large, Belgian security forces are conducting raids around the city, including in the neighborhood of Schaarbeek, where, according to The Guardian, police found, "an explosive device containing nails, among other things. The investigators have also discovered chemical products and an Islamic State flag.”