Andrew Wakefield's "Vaxxed: From Cover-Up to Controversy" will debut at one of our most prestigious fests 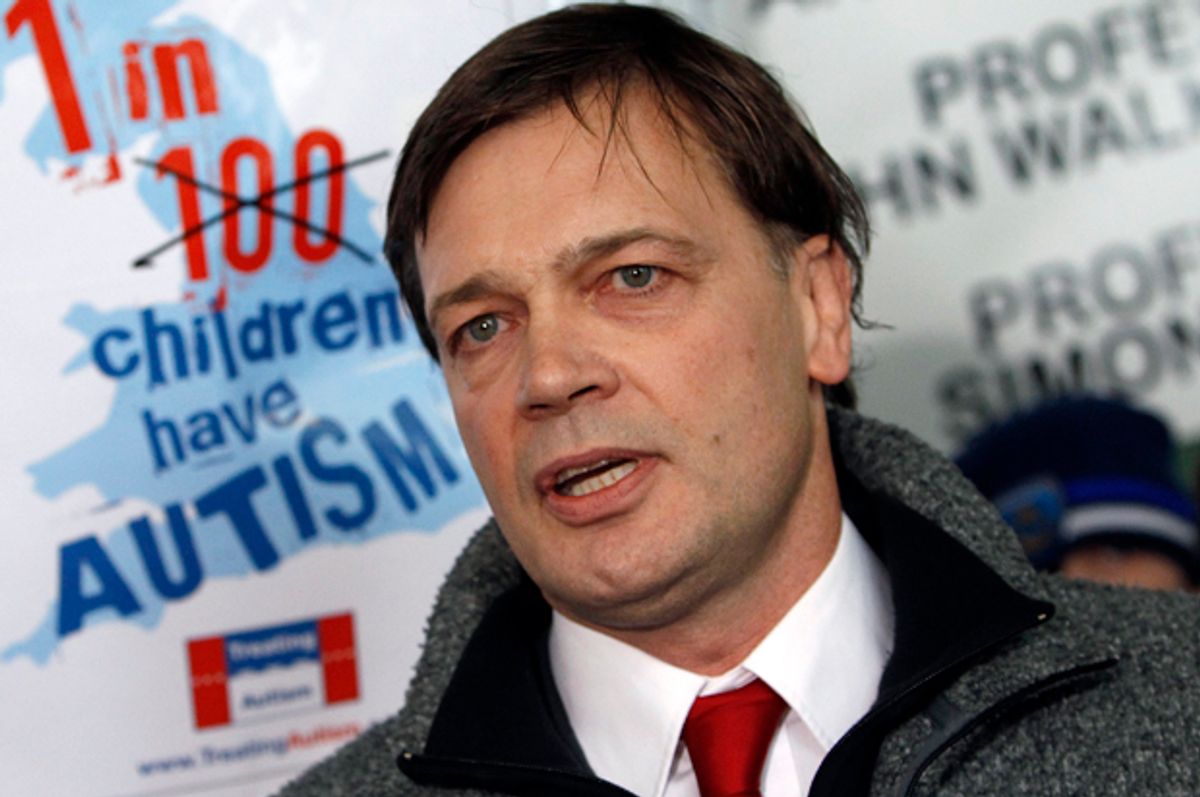 There are not two sides to every story. Not every issue requires us to legitimize an opposing view. Like, for instance, when the other perspective is totally crackpot. For example, if you're a disgraced fraud, maybe you're really not the best source for information about vaccines.

This week the Tribeca Film Festival announced it's debuting a provocative new documentary with the flamboyant name "Vaxxed: From Cover-Up to Controversy." The film's description promises, "Digging into the long-debated link between autism and vaccines, 'Vaxxed: From Cover-Up to Catastrophe' features revealing and emotional interviews with pharmaceutical insiders, doctors, politicians, parents, and one whistleblower to understand what's behind the skyrocketing increase of autism diagnoses today." It is directed by Andrew Wakefield. Yeah. That Andrew Wakefield.

In 1998, the British physician released his bombshell research revealing a correlation between the measles, mumps and rubella (MMR) vaccine and autism and bowel disorders. His report in The Lancet created a stir among parents worldwide, fueled over time by outspoken vaccine skeptics like Jenny McCarthy, who in 2009 declared, "I do believe sadly it's going to take some diseases coming back to realize that we need to change and develop vaccines that are safe. If the vaccine companies are not listening to us, it's their f___ing fault that the diseases are coming back…. If you ask a parent of an autistic child if they want the measles or the autism, we will stand in line for the f___ing measles."

Eighteen years after Wakefield's revelatory findings, profound skepticism around vaccinations is as strong as ever. In 2000, measles had been considered virtually eliminated in the U.S. — and in 2014 there were 644 measles cases spanning 27 states — more than than the previous four years put together. In Orange County the same year, 41 percent of kindergarteners were not vaccinated. Oh and here's the thing: In 2011, Wakefield's stunner of a report was fully retracted as "an elaborate fraud." The British medical journal BMJ's editor said at the time that "It's one thing to have a bad study, a study full of error, and for the authors then to admit that they made errors. But in this case, we have a very different picture of what seems to be a deliberate attempt to create an impression that there was a link by falsifying the data." Wakefield is now barred from practicing medicine in the UK.

Meanwhile, the Journal of American Medicine last year concluded that "Receipt of the MMR [measles, mumps, rubella] vaccine was not associated with increased risk of ASD, [Autism spectrum disorder] regardless of whether older siblings had ASD. These findings indicate no harmful association between MMR vaccine receipt and ASD even among children already at higher risk for ASD." The World Health Organization says that "There is no evidence of a link between MMR vaccine and autism or autistic disorders," and the National Institute of Child Health and Human Development says, "To date there is no definite, scientific proof that any vaccine or combination of vaccines can cause autism. It’s important to know that vaccines actually help the immune system to defend the body." But hey, what do they know?

On Monday, Wakefield revealed on his Twitter and Facebook, "Haven't posted forever. Huge news tomorrow." The announcement, along with a trailer for the film, then went out on Tuesday. The clips ominously ask if our children "are safe," and features "whistleblowers." Appearing in the film is "The Doctors" cast member Dr. Jim Sears, who on Facebook this week called himself "a pro-vaccine pediatrician" but also "pro-truth." He says he "was presented with evidence provided by a top CDC scientist named Dr. William Thompson who has stated clearly that the CDC committed fraud on the MMR autism study." Fraud. That's a funny word funny coming from a filmmaker who's been exposed as a, well, you know. And if you want to make a movie that claims vaccines are the cause of "grievous harm to children," have at it, but can I familiarize you with the potentially seriously effects of measles, mumps and rubella?

Speaking with the LA Times, New Yorker staff writer Michael Specter called the film's placement at Tribeca "shocking." He added, "This is a criminal who is responsible for people dying. This isn't someone who has a 'point-of-view.' It's comparable to Leni Riefenstahl making a movie about the Third Reich, or Mike Tyson making a movie about violence toward women. The fact that a respectable organization like the Tribeca Film Festival is giving Wakefield a platform is a disgraceful thing to do."

But in a prepared statement, a representative of the festival said that "Tribeca, as most film festivals, are about dialogue and discussion. Over the years we have presented many films from opposing sides of an issue. We are a forum, not a judge." To which I reply, are you kidding? On the one hand, there's the American Academy of Pediatrics, the World Health Organization, the Centers for Disease Control. On the other, the "opposing side" in this case a discredited charlatan whose work has been thoroughly refuted. That's like having Neil Degrasse Tyson saying the earth is round, and then saying we need to hear the other side of the story from a guy in a tinfoil hat who lives under a bridge. Do we? Really?

So here it is again. Vaccines don't cause autism. Not vaccinating children, however, can be incredibly dangerous for children and for individuals with compromised immune systems who are unable to be vaccinated. And spreading gobbledygook from quacks isn't being non judgmental. It's being irresponsible and dangerous.