In "Bart to the Future," President Lisa Simpson faces many problems even she can't tackle 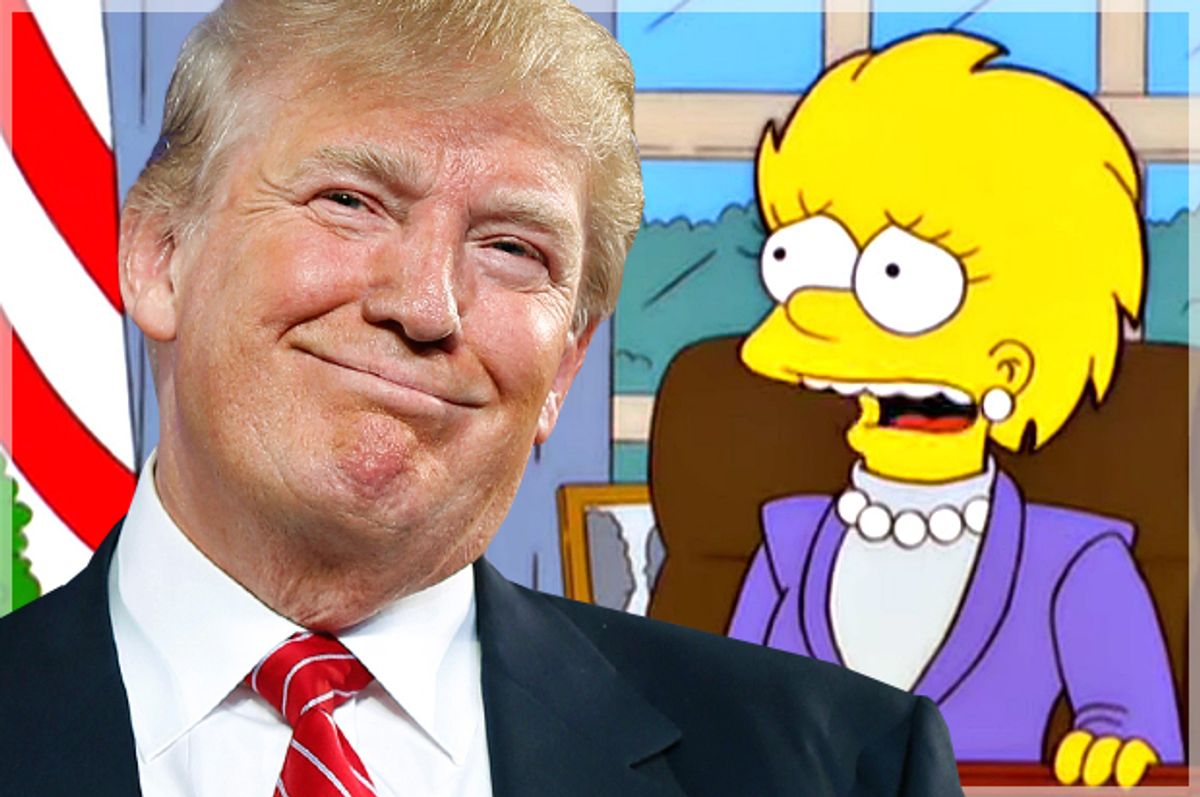 “Bart to the Future,” in season 11 of the iconic Fox animated series “The Simpsons,” is a truly abysmal episode of television. And yet, like many abysmal things, it is experiencing a renaissance, of sorts, because of a throwaway line spoken by Lisa, midway through the episode: “As you know, we’ve inherited quite a budget crunch from President Trump.” Oh, yes: Lisa Simpson is the president of the United States, and she is speaking to her senior staff; and yes, the world is still somewhat intact following the hypothetical presidency of Donald Trump.

The fact that the episode seems to have predicted a Donald Trump presidency has caught the attention of many publications, and last week, writer Dan Greaney spoke to both the Hollywood Reporter and the Washington Post about how that came to be.

Here’s a bit from the Post’s Comic Riffs column:

… the real-estate mogul was just the right comedic fit at the time, and notes that they needed a celebrity name that would sound slyly absurdist.

Besides, Greaney says, “He seems like a ‘Simpsons’-esque figure — he fits right in there, in an over-the-top way.

“But now that he’s running for president, I see that in a much darker way,” the Emmy-winning writer-producer continues. “He seemed kind of lovable in the old days, in a blowhard way.”

All the other predictions for the future in “Bart to the Future” have no resemblance to real life, which is probably the point; “The Simpsons” threw so much material at the wall that in some ways, a correct prediction was inevitable, amid the hover-buses and future-beer that litter the opening of the episode. (Most inexplicably, Bart still listens to tapes in a cassette player, which was already phasing out in 2000, when the episode was made.) And aside from the glory of seeing Lisa as the commander in chief, the episode doesn’t offer a lot of particularly funny or brilliant moments. At her first White House press conference, Lisa confidently tells the assembled media that she is proud to be their first “straight, female” president, which is the saddest attempt at humor in the episode.

“Bart to the Future” hinges around the Simpson family visiting a reservation casino, and the litany of jokes made about Native Americans is pretty painful. Admittedly, it’s “The Simpsons,” so everything is terrible and absurd anyway, but having Bart sit down to see a vision of the future in a “shaman’s" fire—he’s the casino manager—is pretty awkward; having that character then announce his brother is named “Crazy Talk” is positively revolting. (Though I admit to laughing at the idea of a pop-up advertisement in Bart’s vision, which was apparently an idea gotten from a group called “Dances With Focus Groups.”)

After a whole half-episode of disjointed and mediocre joke-telling, adult Bart and adult Lisa end up first clashing and then cooperating. The sibling dynamic between the two Simpsons is ostensibly the main thrust of the episode. Greaney told the Post that “the story was really about Bart saving Lisa’s presidency.” The conclusion of the episode is that Bart, despite being a freeloading layabout, can still help his sister Lisa in a crisis—in this case, it’s sweet-talking a bunch of cranky foreign creditors out of the White House, giving America a bit longer to pay off its Trump-caused massive debt.

"What we needed was for Lisa to have problems that were beyond her fixing, that everything went as bad as it possibly could, and that's why we had Trump be president before her,” he told THR, adding that the Trump presidency is “consistent with the vision of America going insane.” Other problems faced by the Simpson administration: Oceans drained of water, super-criminal children, and the aforementioned deficit; they don’t even have enough money for the huge bookmobile Lisa so desperately wanted. One of her advisors suggests that their only solution is cyanide pills.

So Trump does not leave “The Simpsons”’ future in a good place, which is not that surprising, given his real-life campaign promises. Lisa, with her slicked-back hair and skirt suit, so entirely resembles Democratic front-runner Hillary Clinton that it is astounding; but in some ways, that makes this vision even sadder. Bart is a mooching stoner with a pipe dream for a band that will never materialize, but Lisa is an impotent president, shuttled between a terrible legacy and an insecure future.

Trump isn't depicted in the episode–that has only happened in last summer's promo for “The Simpsons”' season 7— but to our 2016 eyes, if Lisa is Hillary, Bart actually seems more like our candidate Trump, the layabout mucking up her best intentions (and everyone else's, too). After all, Bart's big coup is in replicating the fictional President Trump's actions—talking creditors out of calling in their loans, all while asking for even more money. And while maybe "Bart to the Future" is scary for predicting a Trump future, what's even scarier is the implication that put-together, brilliant Lisa would ever need the expertise of her cool-obsessed, selfish brother.