"Mind numbing stupidity": Obama slammed on Twitter for going to ballgame, being interviewed on ESPN after Brussels attacks

MSNBC's Joe Scarborough was among those who went after Obama, who attended game while on historic Cuba trip 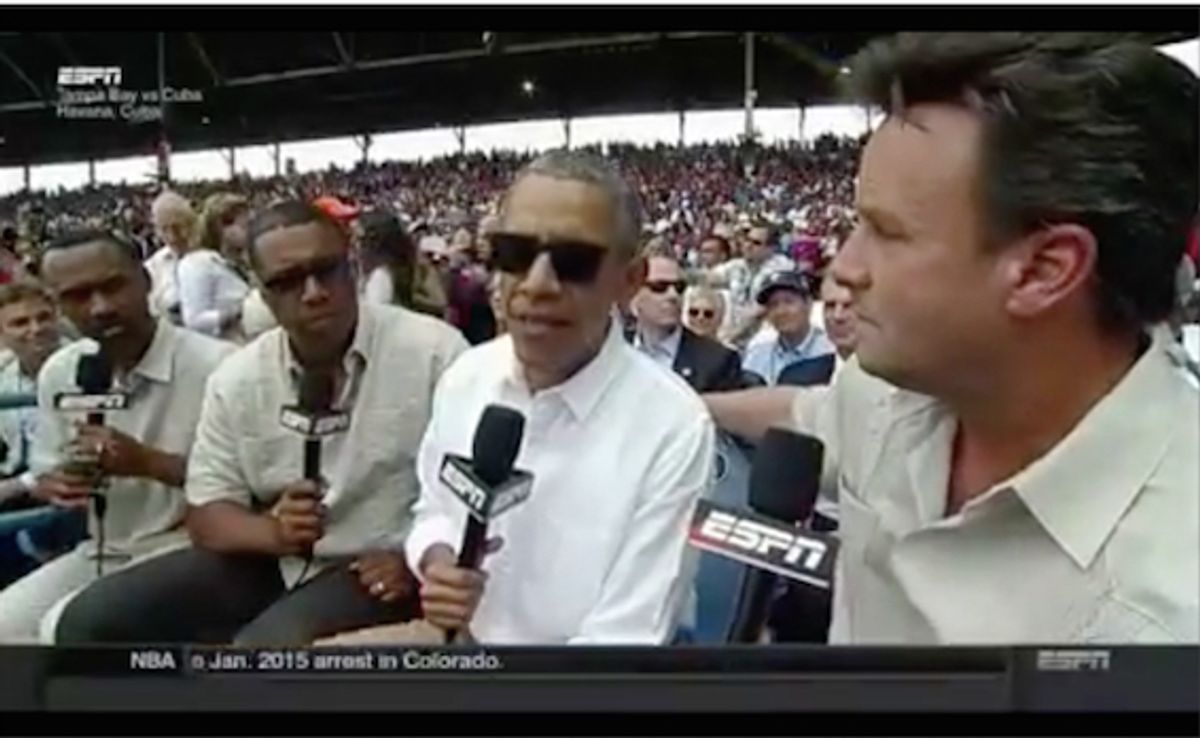 In the wake of Tuesday's horrific attacks on the European capital of Brussels, President Obama faced fierce criticism on Twitter for his interview with ESPN while front row at the baseball game between the Cuban National team and Tampa Bay Rays.

The president, who was in Havana on a historic trip to improve relations between the two countries, defended attending the game when questioned by ESPN’s Karl Ravech.

“I had a chance to talk to the Belgium prime minister early this morning right after the explosions had happened, and this is just one more example of why the entire world has to unite against these terrorists,” Obama explained mid-game. “It’s always a challenge when you have a terrorist attack anywhere in the world, particularly in this age of 24-7 news coverage. You want to be respectful and understand the gravity of the situation. But the whole premise of terrorism is to try to disrupt people’s ordinary lives.”

The president looked casual in a white polo top and black sunglasses, offending some who took to Twitter to condemn the interview and brand him disrespectful.

Joe Scarborough, host of MSNBC's "Morning Joe" tweeted a photo of the ESPN interview with the hashtag "Brussels Attacks."

As Brussels wipes up blood & body parts Obama gives an ESPN interview while sitting next to a Communist Dictator, watching a baseball game.

If you can't do the wave sitting next to a communist dictator, the terrorists win. #ObamaCubaVisit https://t.co/LMLKhruCRK

Nothing says presidential gravity, leadership, resolve against terror like Take Me Out to the Ball Game in Espanol https://t.co/ALy4AauwHd

Others say Obama was very concerned with #Brussels. He had is smartphone opened to ESPN to see if there were any changes. #tcot #ccot

Pres Obama speaks about Brussels with an ESPN tagged mike in his face? How humiliating. Just keep doing the wave, jerk. #AlwaysTrump