He's mostly ignored questions about how contributors to wife's campaign landed on "Hardball." Time for transparency 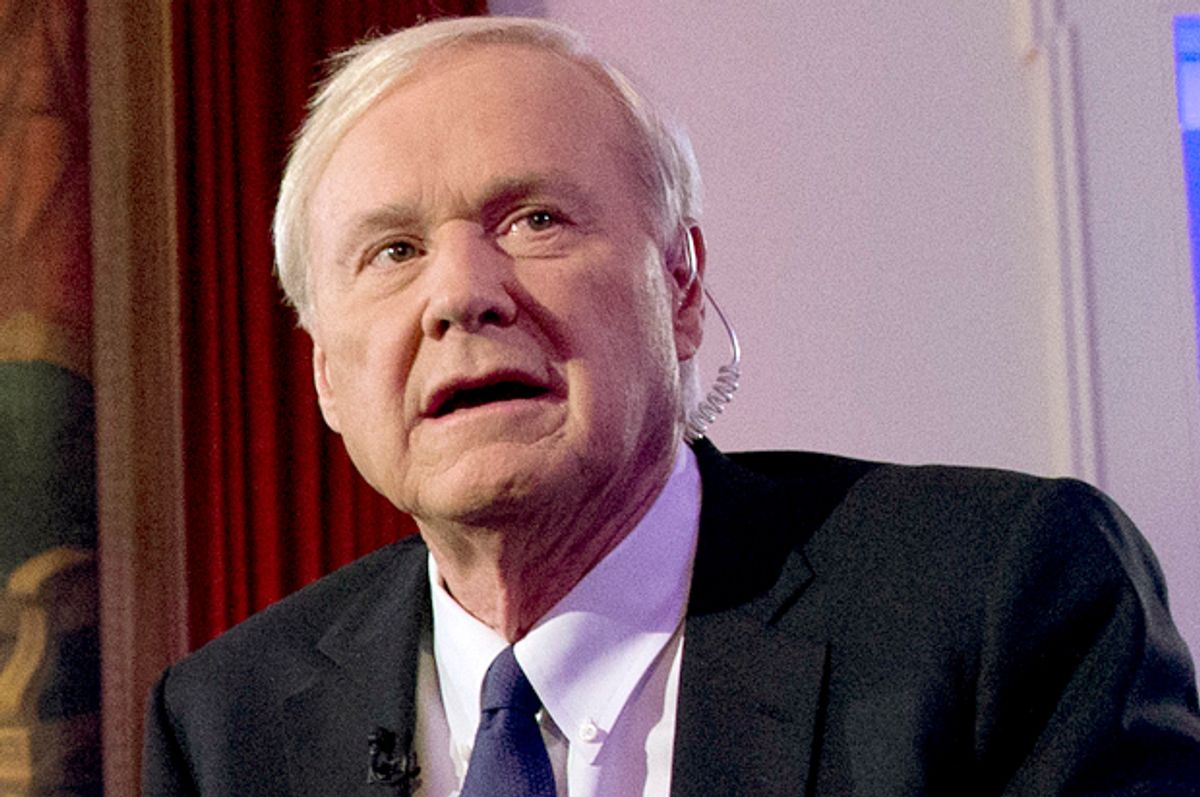 If you don’t know the name, you know the face, and if not you at least know “Saturday Night Live” star Darrell Hammond’s pitch-perfect impersonation of MSNBC host Chris Matthews, whose bombast and penchant for interrupting guests on “Hardball” has served as fodder for the show for more than a decade.

In one noteworthy skit, Hammond’s Matthews character reads an email from a viewer: “Dear Chris, Please stop shouting. I had the TV on mute, but you're still so loud you woke up my kid.” Matthews takes umbrage at the remark. “I’ll stop shouting when I wanna stop shouting! And I don't ever wanna stop shouting!” he yells before threatening to speak with the child himself.

Despite the bravado for which he is known and mocked, Matthews has been uncharacteristically silent since The Intercept’s David Dayen (also a Salon contributing writer) revealed that 48 of his show’s guests have donated nearly $80,000 to his wife’s congressional campaign -- even after pledging to “fully disclose my relationship with her as part of MSNBC’s commitment to being transparent and fair in our coverage.”

Some supporters appeared on the program long before Kathleen Matthews launched her bid to represent Maryland’s 8th District. But Sen. Kirsten Gillibrand of New York gave $10,000 two days before appearing on “Hardball” and California Sen. Barbara Boxer pitched in $1,000 just a day before joining the program.

Republican challenger Aryeh Shudofsky, who will face off against Kathleen if he wins the Republican primary, has called on Matthews to stop hosting his show until the race is over. Right-wing websites have piled on, using the news to accuse Matthews of being a shill for Hillary Clinton -- a narrative that found immediate sympathy with Bernie Sanders supporters, who have similarly called for Matthews’ suspension in a Change.org petition signed by more than 17,000 people.

Like Matthews, MSNBC initially refused to comment on the revelation -- it didn’t even bother to respond to The Intercept’s request for comment. But after the story gained steam, the outlet issued a pearl-clutching response.

“‘Hardball’ has never booked a guest in exchange for a political contribution,” an MSNBC spokesperson told CNN. “That is an offensive accusation that would violate not only the standards of NBC News, but also Chris’s personal ethics.”

Yes, how dare some do-gooder at The Intercept question the integrity of NBC News and its illustrious Chris Matthews?

That no one flinches at such a stupid remark from a cable-news flack shows just how little credibility the networks have with the public. According to Gallup, trust in television news has dropped from 55 percent in the late 1990s to 40 percent today, part of a broader trend of declining faith in our civic institutions. Guess which network the public trusts least? The one with serial liar Brian Williams anchoring breaking news and the motormouth who invites his wife’s political friends on the air.

If MSNBC were run by journalists instead of graduates from the Regina George School of Communications, the network would immediately suspended Matthews while it investigates the donations to his wife’s campaign. Even if executives find there was no quid pro quo between Matthews and his “Hardball” guests -- and in all likelihood, there probably isn’t -- they would admonish him for inviting his wife’s donors on air without disclosing this to viewers. In addition to apologizing and providing a full accounting of which guests contributed to Kathleen Matthews’ campaign, MSNBC would then pledge to be more transparent in the future.

You can expect Chris Matthews’s on-air apology to viewers come at approximately the same time as Rachel Maddow announces she’s endorsing Donald Trump, which is to say you shouldn’t hold your breath.

Whereas journalists in print and online are duty-bound to mark up stories if something is wrong, and places like The New York Times hire reader advocates like Margaret Sullivan to answer for journalistic transgressions large and small, television news is far less accountable. All but the most egregious mistakes -- like getting the outcome of a Supreme Court case wrong, or calling a presidential election for the wrong person -- simply disappear into the ether of the 24-hour news cycle. As the Matthews episode shows, legitimate criticism is treated no less cavalierly.

MSNBC execs will surely breath a sigh of relief once the story blows over and disappears from the headlines. But questions of journalistic ethics don’t go away if you ignore them. Left unaddressed, they eat away at viewers’ trust until no one’s left to play “Hardball.”