Ted Cruz's Aaron Sorkin defense of his wife: Trump is "better off sticking with me, because Heidi is way out of his league”

After Trump threatened to "spill the beans" on Heidi, Cruz quoted "The American President" to defend her 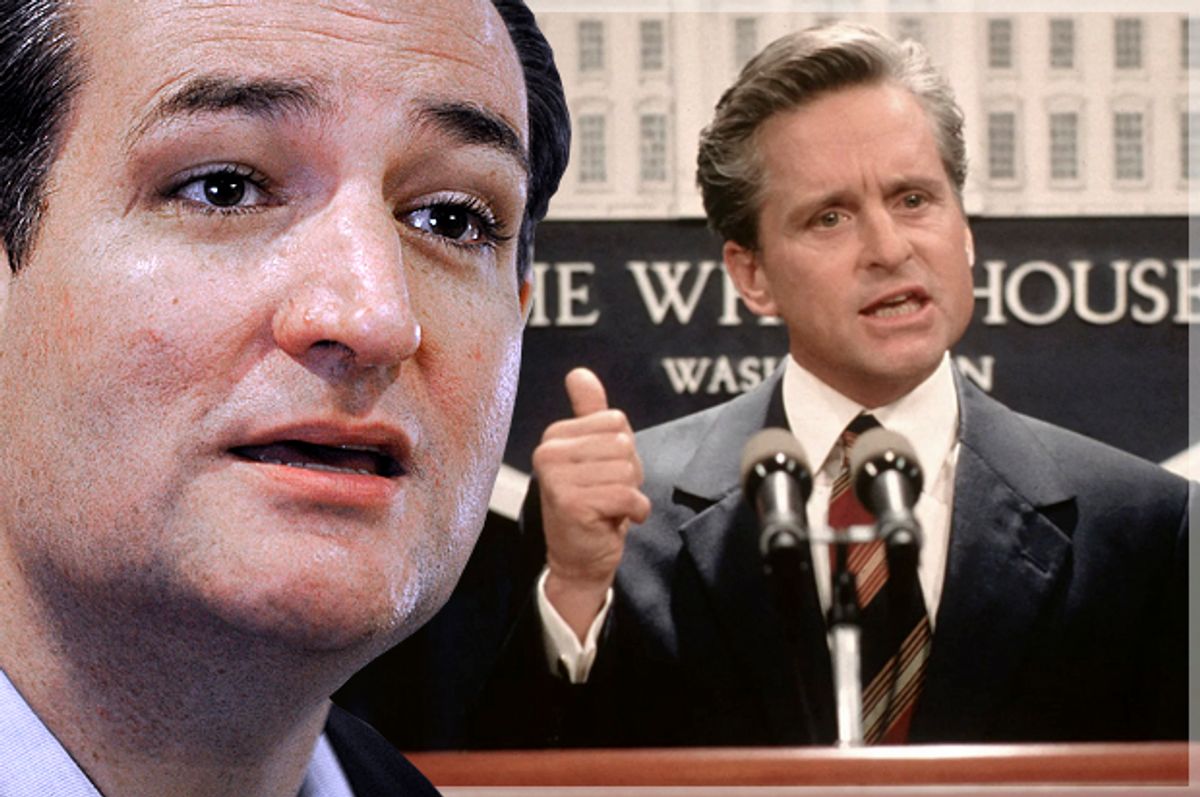 Calling his wife, Heidi, his best friend in the world, Republican presidential candidate Ted Cruz continued to defend her against attacks from rival Donald Trump during an interview on CNN's "New Day" Wednesday morning, lifting a line from Aaron Sorkin's 1995 classic "The American President" to do so.

What once was a thriving bromance has completely devolved into a distasteful pissing contest, with Trump lashing out at the Texas senator and his wife via Twitter Tuesday evening. As Republican voters in Utah prepared to caucus, Trump tweeted that "lyin' Ted Cruz" had used a suggestive picture of his wife, Melania, to sway Mormon voters away from Trump:

Cruz, however, is not (at least directly) responsible for the ad, an outside anti-Trump group is, and Cruz said as much in his response to Trump last night, adding that his old friend is "more of a coward than I thought":

Continuing his defense against Trump's attacks Wednesday morning, Cruz argued that Trump's latest threat is actually in line with previous outburst that correspond with either negative news coverage or poor election performances.

"The reason he's doing that is because he had a very bad night last night. He got clobbered in Utah," Cruz told host Chris Cuomo. "When Donald gets scared, when he gets angry, when he gets threatened he begins yelling, he begins screaming, often cursing. And he begins to be a bully. So last night Donald threatened my wife, he went directly after my wife."

“If Donald wants to get in a character fight he's better off sticking with me, because Heidi is way out of his league,” Cruz said. But as was quickly pointed out on Twitter, Cruz's snap, while perhaps bitting, is hardly original:

For her part, Heidi responded to Trump's attack late Wednesday morning. "Most of the things Donald Trump says have no basis in reality," Cruz told reporters in Wakeshua, Wisconsin, dismissing the threats.