Ted Cruz's terrorism freakout: He perfectly demonstrates how to not appear "presidential" after a terrorist attack 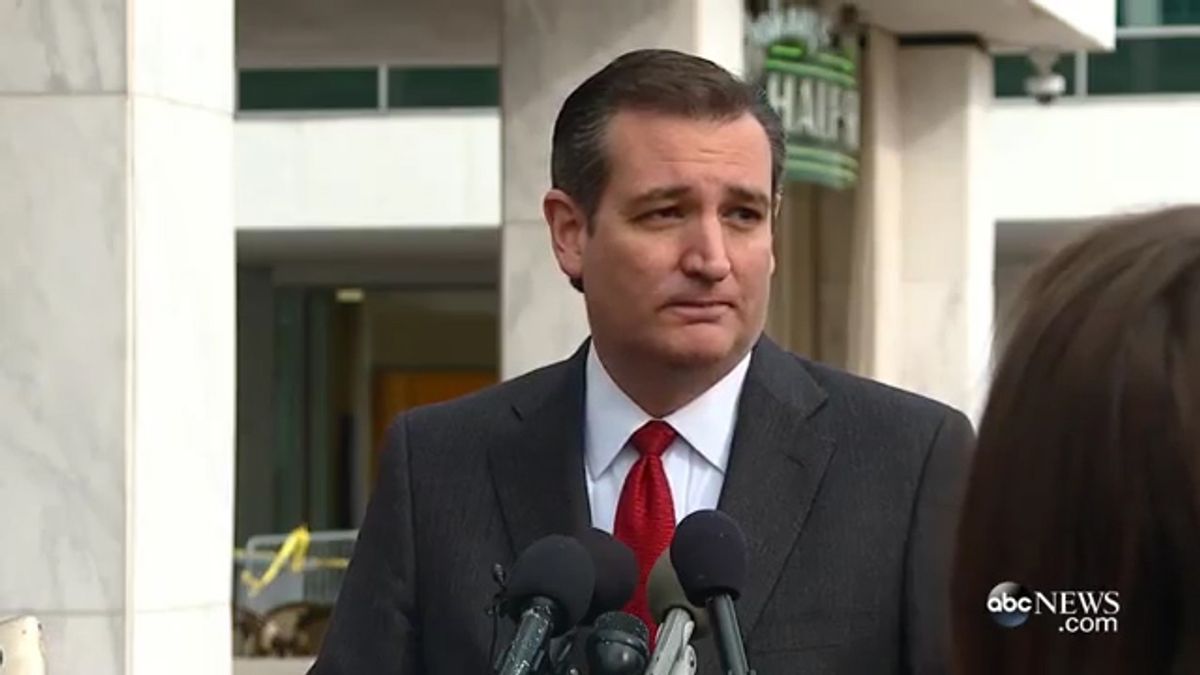 News of the Brussels terrorist attacks came at an opportune moment for Republicans who are ever eager to paint President Obama as a weakling on the world stage. The bombings occurred as the president was in the middle of his historic visit to Cuba, and Obama’s Republican and conservative critics leaped at the opportunity to make a devastating non sequitur: while terrorism strikes in Belgium, Obama is hanging out with the Castros. It’s a two-fer that casts Obama as weak on both terrorism and international communism. Those lines of attack shoot right for the dopamine centers of the right-wing national security lizard brain.

Obama, for his part, issued a brief statement on the attacks on Monday morning, saying that the United States stands with Belgium and will “do whatever is necessary” to bring the responsible parties (early signs point to the Islamic State) to justice. “This is yet another reminder that the world must unite,” Obama said, “we must be together, regardless of nationality, or race, or faith, in fighting against the scourge of terrorism.” It was a condensed version of the statements Obama delivered in response to the November 2015 Paris terrorist attacks and the San Bernardino terrorist attack the month after that: unity, resolve, calm.

But for Obama’s Republican critics, a statement delivered from Cuba wasn’t enough – they demanded that Obama be presidential by cutting short his Latin American trip and either come back to Washington or go to Brussels to personally stand with the people of Belgium. Then there was Ted Cruz, the odds-on favorite to finish a strong second in the Republican presidential nominating race, who called a news conference yesterday to lecture Obama on how to be presidential when terrorism is happening. “President Obama should be back in America keeping this country safe, or President Obama should be planning to travel to Brussels,” Cruz said. “You know, in the wake of the Paris terror attacks, world leaders came together in solidarity with the people of Paris, and yet strikingly absent was Barack Obama.”

I tend to be skeptical when people make arguments suggesting that the president cannot adequately do the job of president when he’s not physically inside the White House. And I think there’s definitely an argument to be made for the president to continue on about his business in the aftermath of a terrorist attack, insomuch as you don’t want to give the impression that the terrorists have succeeded in altering the foreign policy agenda of the most powerful man on the planet. As Paul Waldman writes, Obama’s approach to terrorism has been to treat it as a threat, but not an existential one, and the president very much wants to make clear that foreign policy extends beyond questions of military antagonism. But, of course, there’s room for disagreement here, and much to be said for the symbolic power of the president standing with European allies in the face of a common threat.

But Ted Cruz really isn’t the guy to make the case that Obama is not acting presidential, given that his own response to the Brussels attack has been hysteria, demagoguery, and a foul sop to anti-Muslim sentiment.

Let’s pick apart Cruz’s Brussels reaction piece by piece. Militarily, Cruz wants to respond to ISIS by, and this is an oft-stated position of his, “carpet bombing them into oblivion.” If you’re talking about the actual Islamic State, meaning the (shrinking) amount of territory the group controls in the Middle East, then what Cruz is advocating here is nothing short of a war crime. You can’t “carpet bomb” ISIS because they’re enmeshed within civilian populations across cities in Iraq and Syria.

Cruz’s larger plan to conquer ISIS post-Brussels is to end political correctness. And he plans to deliver a crushing blow to the terrorist group on his first day in office by speaking the special, magic words that President Obama refuses to say. “The truth is, we can never hope to defeat this evil so long as we refuse to even name it,” Cruz said. “That ends on January 20, 2017, when I am sworn in as president. We will name our enemy -- radical Islamic terrorism.”

And, finally, Cruz seized on the attacks to roll out an insane new policy proposal – he wants to “empower law enforcement to patrol and secure Muslim neighborhoods before they become radicalized.” As my colleague Elias Isquith writes, Cruz is talking an abhorrent abuse of government power that takes existing anti-Muslim sentiment in the country and enshrining it as official policy. He’s proposed denying American citizens their civil liberties and using the heavy hand of the state to treat them as potential criminals for no other reason than their faith.

And this guy is going to give a lecture on how to act presidential? He sees a terrorist attack unfold overseas and his immediate instinct is to bomb things, violate religious freedom, and curtail civil liberties at home. Cruz is giving in to every worst instinct, and he’s letting terrorists shape his policy agenda as he clamors to demonstrate some version of toughness and “leadership.” Say what you will about Obama’s response to terrorism, but I’ll happily take a “cool” and “detached” president over one who freaks out and proposes creating a discriminatory police state.