Wilkerson says Snowden did not threaten U.S. security, and, in a perfect world, the whistleblower would be rewarded 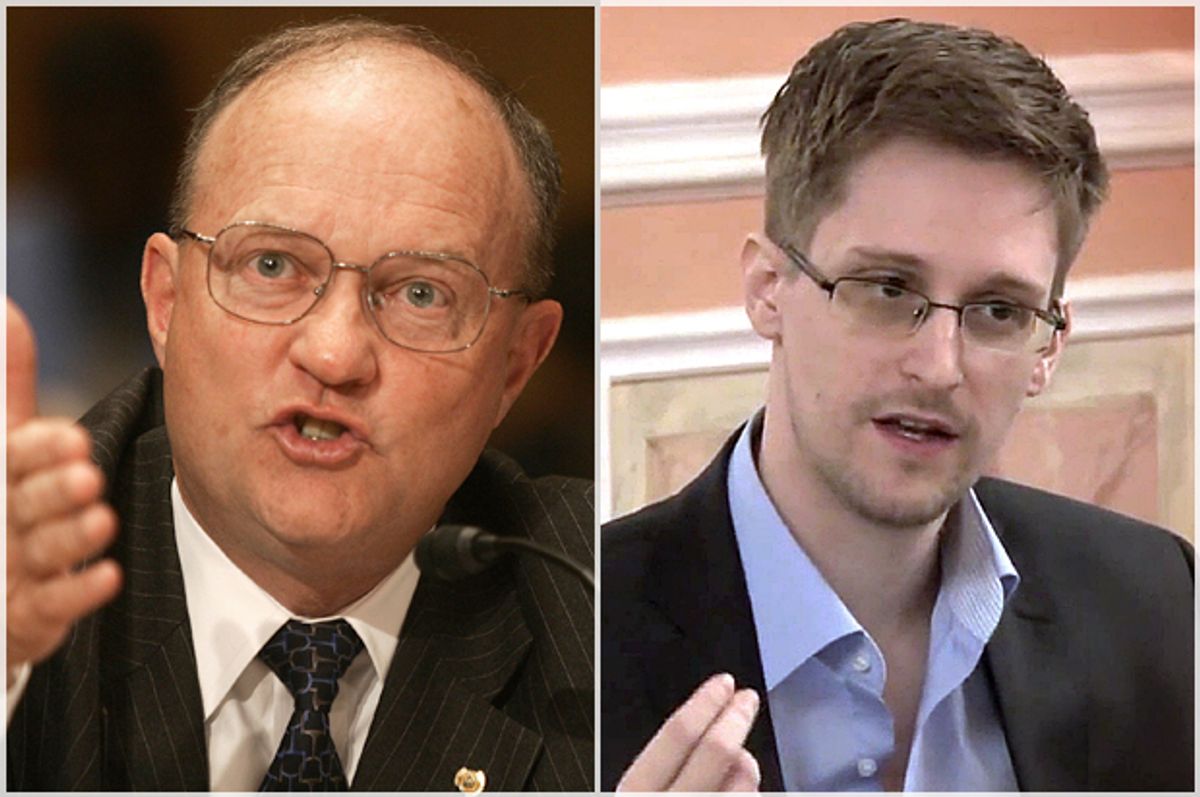 "I try to stay up with Snowden," said Lawrence "Larry" Wilkerson. "God, has he revealed a lot," he laughed.

A retired Army colonel who served as the chief of staff to Secretary of State Colin Powell in President George W. Bush's administration, Wilkerson has established himself as a prominent critic of U.S. foreign policy.

He sat down with Salon for an extended interview, discussing a huge range of issues from the war in Syria to climate change, from ISIS to whistle-blower Edward Snowden, of whom Wilkerson spoke quite highly.

"I think Snowden has done a service," Wilkerson explained. "I wouldn’t have had the courage, and maybe not even the intellectual capacity, to do it the way he did it."

Snowden's reputation in mainstream U.S. politics, to put it lightly, is a negative one. In the summer of 2013, the 29-year-old techno wiz and private contractor for the NSA worked with journalists to expose the global surveillance program run by the U.S. government.

His revelations informed the public not only that the NSA was sucking up information on millions of average Americans' private communications; they also proved that the U.S. government was likely violating international law by spying on dozens of other countries, and even listening to the phone calls of allied heads of state such as German Chancellor Angela Merkel, who subsequently compared the NSA to the Stasi, East Germany's secret police.

Breaking with establishment political figures, Col. Wilkerson commended Snowden for his work and the way in which he carried it out.

"There’s a logic to what he has done that is impressive," Wilkerson told Salon. "He really has refrained from anything that was truly dangerous, with regard to our security — regardless of what people say."

Snowden worked with journalists Glenn Greenwald, Laura Poitras and Ewen MacAskill, and published the revelations in renowned international newspapers, including the Guardian, the New York Times, the Washington Post and Der Spiegel.

"It’s clear to me from listening to his personal statements — I think those are important — that he did have a genuinely altruistic motive for doing it," Wilkerson explained.

"Snowden seems to me to be pure as a driven snow," he laughed. "You can be dangerous if you're that way, but you can also be helpful. And I think he's been more helpful than dangerous."

The whistle-blower himself says he has always been incredibly careful about what exactly he discloses, and to whom. "I carefully evaluated every single document I disclosed to ensure that each was legitimately in the public interest," Snowden told the Guardian. "There are all sorts of documents that would have made a big impact that I didn't turn over."

Wilkerson believes the whistle-blower. Many American officials do not.

Politicians on both sides of the aisle have accused Snowden of a slew of crimes, and the Obama administration charged the whistle-blower on two counts of violating the 1917 Espionage Act and theft of U.S. government or foreign government property.

Former Bush-era CIA and NSA Director Michael Hayden even made comments that suggested he would like to put Snowden on the Kill List (although he claimed in his recent book that his remarks were misinterpreted).

Wilkerson feels the opposite way. "I credit Snowden for having a great deal of courage, because he’s ruined himself forever," he told Salon.

"I don’t think he has a future," the former Bush administration official added. "He has a future so long as he can continue to co-exist with all the restraints and pressures around him. But I'm not sure that's being long-lived."

"And I don't see him ever being accepted back here," Wilkerson added.

Snowden has, since leaking the documents, lived in asylum in Russia. He had not planned on living in the country, but ended up there for fear of capture by the U.S. government when in transit elsewhere.

Asked about Snowden's temporary refuge in Russia, which some critics have claimed is a symbol of supposed ill intentions, Wilkerson said, "I think that was a matter of convenience."

For the past few years, Snowden has applied for asylum in several other countries, yet is worried that, were he to move, he could be intercepted by the U.S.

When asked if he thinks the whistle-blower will ever be allowed to return to the U.S., Wilkerson replied, "No, no, no, you can't set that kind of precedent."

"It's a shame, because I do think he has done a service," he added. "Though I'm not sure I'd recommend it to everybody," Wilkerson laughed.

Many activists have called for pardoning Snowden. Dissidents like renowned scholar Noam Chomsky have even said that the whistle-blower should be honored for his service.

Wilkerson said it would be "impossible" for Snowden to be exculpated, let alone rewarded. "I'm a realist; I think that's an impossible thing," he said.

"Should he be?" Wilkerson added. "In a perfect world, yes."

"Let me just keep going," he went on with a laugh. "Should the Senate majority leader be put in jail for constitutional abrogation, in a perfect world?"

Some analysts and experts have also made the argument that what whistle-blowers like Snowden have done is actually required under international law, because they are exposing illegal activity by the U.S. government, shining light on policies and programs that contravene international law.

"I think you can make that argument," Wilkerson said. "But then you have to make the argument of a realist — someone like me, for example — that international law is much what Mao Zedong said it was: It's who has the biggest gun."

"And we have the biggest gun," he added.

"You have to understand that reality in the world, in order to make any progress."

Wilkerson concluded on a somber note.

"I think the worst possible thing for the United States would be to get Snowden back some way, by hook or by crook, and have to live up to its horrible rhetoric about what they'll do to him, because they will," he said.

"My daughter once said something to me — a Secret Service agent, former second lieutenant in the United States Army, now a housewife — she said to me, 'Dad, don't ever count us out, because we will fucking bomb Hiroshima. And then we'll bomb Nagasaki.'"

"She's right," Wilkerson explained. "Don’t ever count us out, because we are the Greeks on Milos. We have the power, and we will do it."