What happened in Arizona wasn't an accident: When states make voting impossible, it's for a very clear reason

Arizona residents were forced to wait hours on line in order to vote in this week's primary. Some were turned away. 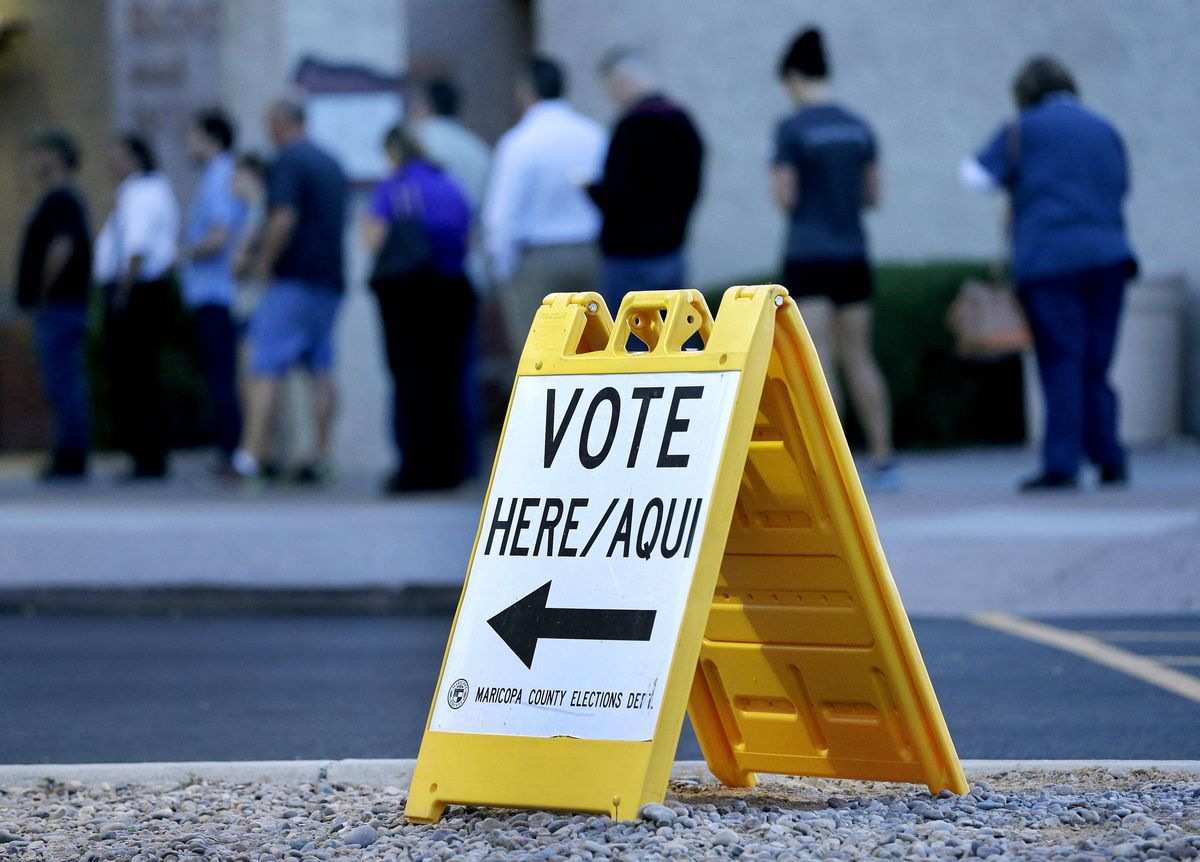 Once again, an American election was unnecessarily thwarted by long lines and not enough ballots. To say there's no excuse for such nonsense, especially in a nation that prides itself on its representative democracy and, yes, its exceptionalism, is understating the problem. This time around, it happened during the Arizona primary where countless voters were forced to stand in lines for hours, while others were told they weren't registered in the first place.

In Maricopa County alone, election officials infuriatingly reduced the number of polling places by 70 percent. Such a drastic reduction meant there was only one polling place per 21,000 residents of the highly populated Phoenix metroplex. Officials including County Recorder Helen Purcell (a Republican) said the cutbacks were due to budgetary concerns. Uh-huh. Of course, I doubt members of either party who were forced to wait in five-hour lines would've minded the additional expense to facilitate our most basic right as Americans. Elsewhere, independent voters who switched their registration to the Democratic Party were allegedly told they hadn't registered at all, forcing them to sit out the closed primary.

It's yet another example of why the federal government should take over the election process. Local and state officials are clearly in too far over their heads to handle a task of this magnitude, as evidenced by the reality that every time we hold an election in this country, one numbskull or another flummoxes the whole thing -- intentionally or not.

"Intentionally" is an appropriate word here since many of the electoral shenanigans at the state level are, indeed, intentional.

Voter ID laws and punitive voter purges have been the centerpieces of a Republican strategy to rig modern elections. Republicans in nearly half of all states have managed to pass laws that make it more difficult for lower-income Democratic voters to cast ballots, forcing former Attorney General Eric Holder to compare such measures to the poll taxes used in the Jim Crow-era South in order to suppress the Black vote.. This is absolutely by design, even if some Republicans are caught in the meat grinder, too. The lower the turnout, the better Republicans fare in elections, so while voter ID laws tend to disenfranchise Democrats, the intention is more specifically to elect Republicans.

Thirty-three states boast one form of voter ID or another. Texas has perhaps the most ridiculous such law. If you don't have one of the required forms of identification in the Lone Star State, you'll have to apply for an Election Identification Certificate (EIC). But in order to get an EIC, you have to present your proof of citizenship and a second form of identification. Yes, that's right, you'll need to get an ID in order to get an ID -- one of many reasons why this law is so completely absurd. And all of this on top of the normal voter registration process (which only requires a Social Security Number). If you don't have a mandatory ID issued by the TxDPS (Texas Department of Public Safety), it might be because 70 counties don't have a TxDPS office.

The GOP excuse for these laws? It's voter fraud, they say. But how often do voters attempt to scam the system? Among all federal elections between 2002 and 2005, the rate of voter fraud was 0.00000013 percent. This according to a five-year probe by George W. Bush's Justice Department. Put another way, around 26 people out of 197 million were convicted of attempting to vote illegally during all of those elections. And yet the Republicans continue to screech about voter fraud anyway. (They're willing to believe that voter fraud exists, even though it doesn't, and yet the climate crisis, with its 97 percent scientific consensus, is clearly fiction.)

How do we know this is all about electing Republicans? They've admitted it. Just ask Ken Emanuelson, Mike Turzai, Jim Greer and Paul Weyrich.

Knowing all this, it's baffling to see a WhiteHouse.gov online petition -- apparently posted by Democrats and circulated throughout social media today -- that calls out alleged "voter fraud" in Tuesday's Arizona primary.

WE PETITION THE OBAMA ADMINISTRATION TO:
INVESTIGATE THE VOTER FRAUD AND VOTER SUPPRESSION IN ARIZONA 3/22/2016 DEMOCRATIC PARTY.
Petition to have the Obama Administration investigate the voter fraud and voter suppression on 3/22/2016 in ARIZONA. Numerous voters who switched from Independent to Democrat could not vote and were turned away or given provisional ballots which in turn were never counted. We the people of the United States of America find this act alarming and would like a complete investigation to uncover the violations that occurred during the Arizona voting on 3/22/2016 and prosecute those responsible to the fullest extent of the law.

It goes without saying that cases of gross errors and alleged voter suppression were rampant and deserve to be investigated, even though the Supreme Court infamously overturned Section 5 of the Voting Rights Act, allowing 11 states including Arizona to monkey with election rules without any pre-clearance by the Justice Department.

But why the hell would Democrats include "voter fraud" in the petition, especially knowing there weren't any known cases of voter fraud (voters using fake names or voting more than once, etc.) in Arizona this week? Indeed, throughout the Democratic primaries, voters and activists have been screaming about voter fraud, perhaps not realizing that disenfranchisement isn't the same as voter fraud.

Whether or not the use of the term was accidental, it still reinforces a pernicious Republican frame that's built upon total fiction. And if Democrats are on record protesting alleged voter fraud, it's simply more fuel for the GOP effort to exploit nonexistent voter fraud as the animating force behind voter ID laws and voter purges. Worse, targeting voter fraud will obviously lead to more voter suppression and disenfranchisement -- the very things the petition intended to weed out.

To repeat: There needs to be a national effort to reform the election process, including the federalizing of elections; the repeal of unconstitutional Voter ID laws; and the reinstatement of Section 5 of the Voting Rights Acts. But it'll never happen if short-term political kneejerking is prioritized over correctly framing the issue. An already horrendous voting crisis will only be unintentionally aggravated by the activist left if it continues to cite voter fraud as an actual problem. Accidental or not, the mythologies and the conspiracy theories should remain the exclusive purview of the GOP. Democrats, meanwhile, would do well to keep an eye on the big picture rather than subverting their own voting rights by hamhandedly enabling the myths and conspiracies.

WATCH: Thousands of American citizens have encountered major issues while attempting to vote