Brooks dedicated himself to idea the GOP was grounded in ideas. It has all collapsed, along with his rationality 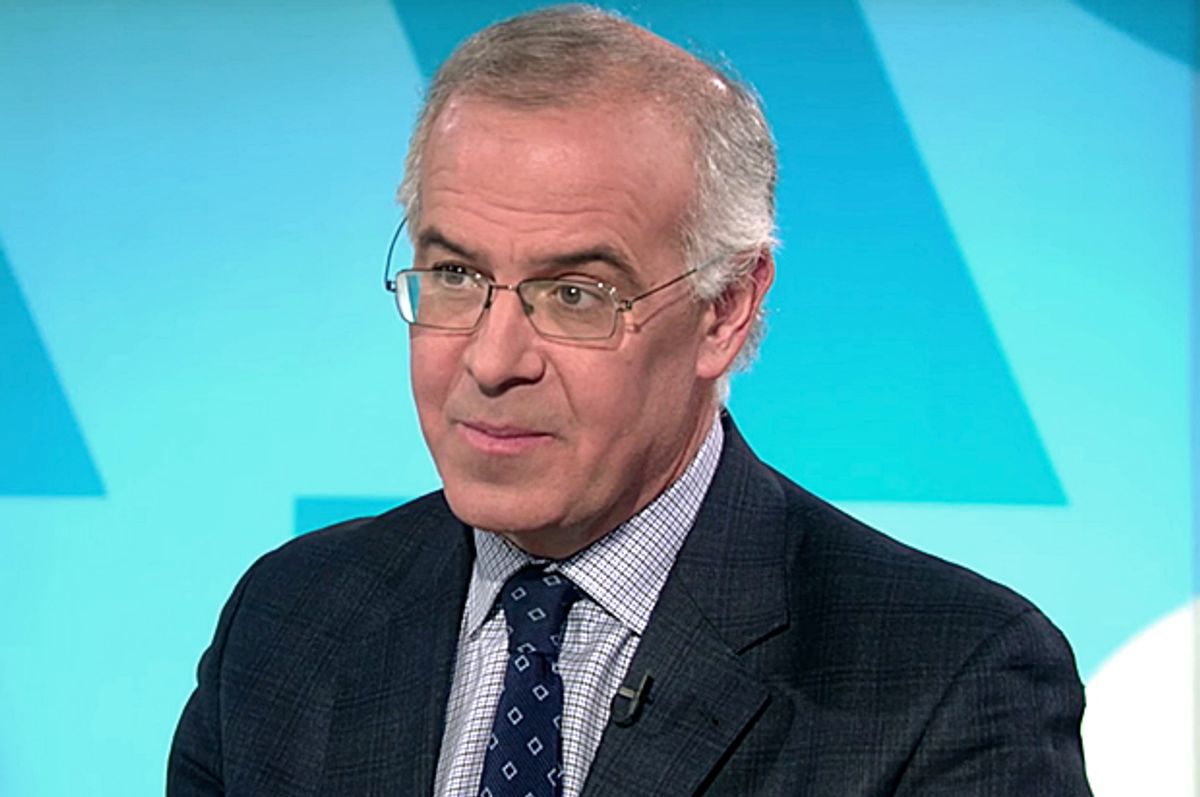 The Republican Party was never based on science. It never accumulated data or drew conclusions from it. Like all political parties, its positions are sewn together from various pieces of found cloth, each meant to attract various possible constituencies. Though party stalwarts like Paul Ryan and David Brooks dress up those constituencies in what appear to be this thoughtfully designed clothing, the truth of the matter is that there is nothing intellectual about their tailoring. Essentially, they merely stitch together the rags of a racist base and the cast-offs of affluent contributors to create what look like new suits that, though they may applaud them, cover about as much of the wearer as does the emperor’s proud new clothes.

Thomas Kuhn’s The Structure of Scientific Revolutions has been influential on intellectual thought from more than half a century, so it is not surprising that David Brooks, today, has picked it up as a thread for sewing back together what even he has finally come to see as the remnants of the Republican Party. After watching the institution he has dedicated his life to supporting fall into tatters with a speed no one imagined, Brooks is trying desperately to envision some way of saving at least a little of the material being ripped away from what is left of the outfit. At the same time, he is trying to convince himself that, at one point (the Reagan years), his creations were the height of fashion.

Fashion, he implies, has intellectual heft. Brooks writes that “Reaganism was very economic, built around tax policies, enterprise zones and the conception of the human being as a rational, utility-driven individual.” Even amid the myriad disasters spawned by those very policies, Brooks still wants to claim that they were expertly tailored by diligent craftspeople, that something more was going on than pandering to style.

Of course, there was never any real conception of “the human being as a rational, utility-driven individual.” You can’t sell rational people the illusion that they are going to be rich. That’s a con, and cons are built around avarice, not rational thought. That really is ‘the emperor’s new clothes.’

Reaganism, if there ever really was such a thing, has failed. The crumbling infrastructure of Flint is just one of the first obvious holes in the fabric. Our bridges and tunnels and highways and airports are falling away like shoes whose flapping soles and broken laces can no longer protect our feet. There are going to be more bridge collapses, water and sewage problems, railroad accidents and airport incidents all because “we” decided we look better in the cheap suits the Reagan hucksters convinced us to buy at the high price of ignoring our shoes, our underwear and our overcoats.

Not only that, but it left us with holes in our pockets and at the mercy of pickpockets and muggers. The Reaganites outfitted us with a cane that turns into a sword along with a brace of pistols, but these can’t protect us from the hands reaching out from everywhere and tearing at our vestments.

Donald Trump promises to replace the Reagan tatters with a suit of armor, though armor stopped working centuries ago. The people Brooks helped fool are being fooled again. This time, though, the con artists are leaving Brooks—and Ryan—with an almost empty shop. Brooks has a needle in his hand and what he thinks is a viable spool of thread and even a bit of strong (he thinks) cloth, but no one is paying attention—no one is interested in buying the nice new necktie he says he can make.

He doesn’t even know what it will look like, he says, but he’s excited about it. He’s going to make “Émile Durkheim neckties” to replace the “Adam Smith necktie” that, he claims was the emblem of Reaganism. He thinks his new neckties will “relate to binding a fragmenting society, reweaving family and social connections, relating across the diversity of a globalized world.”

Let’s be serious here: The real necktie of the base of the Republican Party since the creation of the “Southern strategy” 50 years ago has been a noose. Metaphorically, it has tightened around the necks of the new right-wing “base” to the point where, finally feeling strangled, they are throwing it off in favor of Trump’s promised armor. Literally, it is the noose of the lynch mob, the mob that the conservative movement turned to in the sixties to augment its minority positions, creating a new and unstable majority that, frankly speaking, never could have lasted and that, today, is finally falling apart.

Kuhn was writing about the paths of real scientific and intellectual progress. We’ve had none of that from conservative circles, certainly not since the success of Brooks’s mentor’s God and Man at Yale in 1951. William F. Buckley, Jr. was as much the elitist as Brooks, and would also be trying to see the rise of Trump (and, as Brooks presumes, the coming fall) as a means for regaining control of the sewing machine. Even in the face of their failure, nothing changes in their beliefs.

Brooks ends by saying “it’s exciting to be present at the re-creation” of the Republican Party. Maybe so, but he’s going to have to be offering something more than threadbare rags.