GOP's Supreme Court blowback: The Republicans' case for obstruction is bad and getting worse 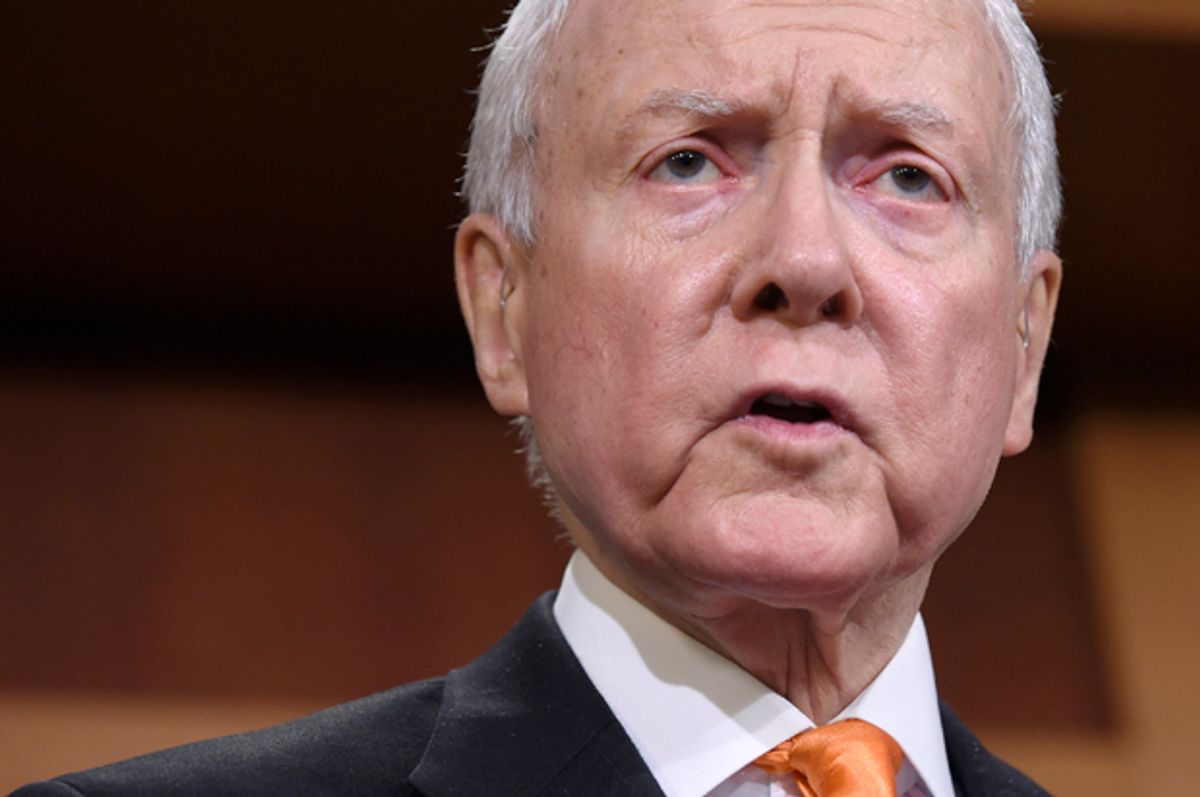 Orrin Hatch, one of the senior Republicans on the Senate Judiciary Committee, is on a one-man mission to save the American judiciary. As Hatch sees it, this branch of government is under terrible and imminent threat from a malign force that threatens to undermine its legitimacy and corrode the foundations of American democracy. What evil power could produce such menacing terror? What fantastical horror can possibly align itself against the institutions of American justice?

In a Bloomberg Op-Ed this week, Hatch writes about a harrowing experience he went through at the “monthly lunch meeting” of “a well-respected legal organization.” He had been invited there to discuss the Supreme Court vacancy left by the late Antonin Scalia, when, without warning, a group of protesters “holding professionally printed signs” began chanting “do your job” at the senator. They were protesting the decision by Hatch and other Republican leaders to deny President Obama’s nominee to replace Scalia, appeals court Judge Merrick Garland, a confirmation hearing.

As Hatch writes, those protesters and their suspiciously well-printed signs were all the confirmation he needed that obstructing Garland’s nomination is the right thing to do:

Now that a majority of states have held presidential primaries, and as this hostile election cycle turns from those contests to general election, organized disruptions of any thoughtful discussion about the Supreme Court will only intensify.

Make no mistake: These protesters are not interested in seeing the Senate take seriously its constitutional duty to provide advice about, and determine whether to give or withhold consent to, a consequential Supreme Court nomination. They care little about the Senate operating as a check and balance to the executive branch and instead simply insist that the Republican-led Senate do what progressive activists want and rubber-stamp a presidential appointment.

Ah, the beauty of motivated reasoning. Hatch and his buddies shut down the nominating process because they claims they’re concerned about politicization, and when Hatch is protested for adopting this controversial stance, he claims justification by pointing to the political reaction he provoked. “The liberal left is seeking to bully the Republican-led Senate into ignoring its constitutional responsibilities and further destroying our nation's delicate system of checks and balances,” Hatch concludes. “I am more resolved than ever to move forward with the confirmation process only after this toxic election season is over.”

This is a variation of the argument Judiciary Committee chairman Sen. Chuck Grassley made a couple of weeks ago when he lashed out at the president and the Democrats for trying to “score as many political points as possible” by putting forth a nominee and demanding a hearing. Both Hatch and Grassley want to obstruct the nominating process and make it seem like the reaction to their obstruction – protests and the routine business of governing – is the real abuse of power. It’s too clever by half: if they’d allow hearings to go forward, the “politicization” they’re complaining about from Democrats and liberals wouldn’t be happening.

Just as significant as the weakness of their arguments is the fact that they keep having to go back to the well to defend their position. Blocking a Supreme Court nomination for the length of time Republicans have in mind was never going to be an easy sell politically, but they determined that it would be worth a little political trouble to prevent Obama from getting another court pick. But they’re already absorbing a ton of damage over this, and cracks are forming in the obstructionist wall.

Vulnerable blue-state Republican senators like Pat Toomey of Pennsylvania are running into angry constituents and are being forced to break with the Republican leadership. Toomey said this week that he’ll agree to a meeting with Garland “out of courtesy and respect for both the president and the judge.” Others, like Sen. Jerry Moran of Kansas, are stating outright that Garland should get his hearing and his vote. “I would rather have you complaining to me that I voted wrong on nominating somebody than saying I’m not doing my job,” Moran told constituents this week.

These arguments from Republican senators run directly counter to the leadership’s position, which is that the “courteous” and “respectful” action is to deny Garland any consideration until after the election, and that the “job” of the Republican Senate is to protect the judiciary from the deleterious effects of election-year confirmation hearings. So while Orrin Hatch may twist himself in knots to argue that a bunch of protesters ruining his fancy D.C. lunch meeting is proof that he’s right to block the Garland nomination, what it really shows is that the Republicans’ obstructionist plan is going to be far more painful politically than they hoped.