The tabloid, which broke the Cruz "sex scandal," doesn't have a great track record for its political exclusives 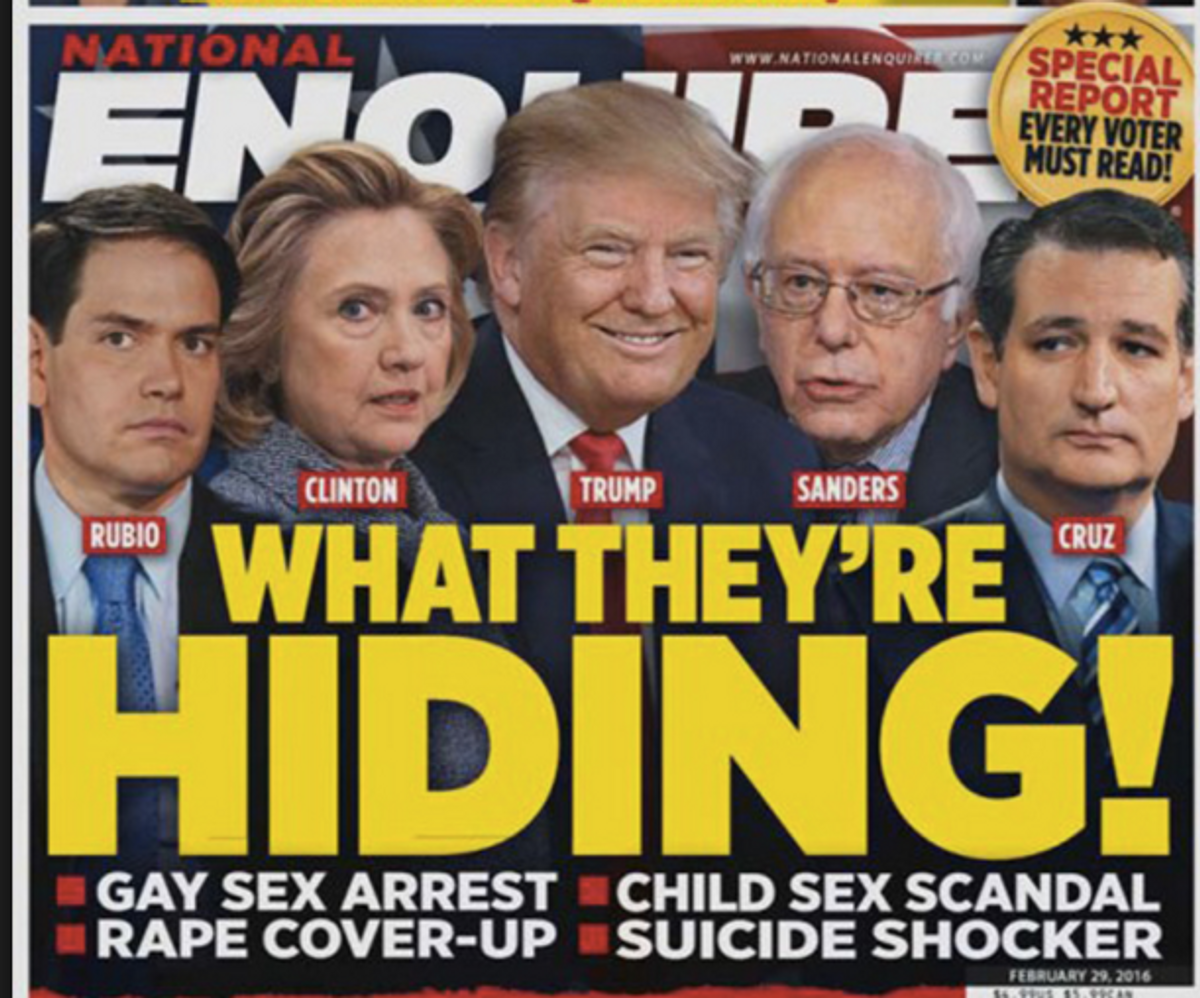 The National Enquirer unexpectedly thrust itself into national relevance Friday morning when it published a story claiming that Republican presidential hopeful Ted Cruz has had affairs with at least five women. Cruz angrily denied the report and blamed GOP frontrunner Donald Trump for orchestrating the smear with "his friends at the National Enquirer and his political henchmen."

In a Facebook post, Trump denied any involvement with the story but suggested that if the National Enquirer reported it, well, it's probably true: "Ted Cruz’s problem with the National Enquirer is his and his alone, and while they were right about O.J. Simpson, John Edwards, and many others, I certainly hope they are not right about Lyin’ Ted Cruz."

The National Enquirer is often the butt of jokes, but Trump isn't entirely wrong — the paper's sensational stories have, on occasion, crossed over into the mainstream. The Pulitzer Prize Board declared the tabloid eligible for journalism's most prestigious prize in 2010 after it broke the news that presidential candidate John Edwards had fathered a daughter out of wedlock with a campaign staffer. The Enquirer also published photos of O.J. Simpson wearing shoes that matched footprints found at the scene where Nicole Brown and Ron Goldman were murdered. The photos were later used as evidence in the Goldman family's civil suit against Simpson.

Those cases aside, the National Enquirer has often earned its reputation as perhaps our nation's least respected news source. Here are five of the most outlandish political scoops ever published by the granddaddy of all supermarket tabloids:

In a "bombshell world exclusive," the Enquirer claimed that Supreme Court Justice Antonin Scalia's March 2016 death involved foul play. According to the Enquirer, Scalia was assassinated by a "$2,000-a-night hooker" hired by the CIA to "inject Scalia with a needle filled with poison in his buttocks."

A December 2015 Enquirer story repeated claims made in Buzzfeed reporter McKay Coppins' book "The Wilderness" that former presidential hopeful Marco Rubio spent $40,000 on opposition research to find out whether his fellow candidates knew about a Florida woman that "had supposedly been impregnated by Rubio, and then went on to have an abortion.” The Enquirer also reported a "rumor" that Marco Rubio was supporting a "secret second family."

Republican operative Roger Stone was quoted in the Cruz story as saying of the Texas senator, "I believe where there is smoke there is fire." But this wasn't the first time Stone has gotten involved in a scandalous National Enquirer story. In February 2016, the tabloid reported the following claims made in a book authored by Stone: “Jeb had snorted lines of cocaine at the vice president’s residence at the Naval Observatory on the night of Vice President George H.W. Bush’s election to the presidency.”

According to the Enquirer's sources, the former secretary of state deleted emails from her personal server that contained "personal revelations about a secret lesbian lifestyle." The April 2015 story claims that Clinton's long list of conquests includes "a beauty in her early 30s who has often traveled with Hillary; a popular TV and movie star; the daughter of a top government official; and a stunning model who got a career boost after allegedly sleeping with Hillary."