We are not Chiraq: Yes, Chicago has too many murders, but labeling us with terms like “war zone,” “Chiraq” and “urban terrorism” doesn't help 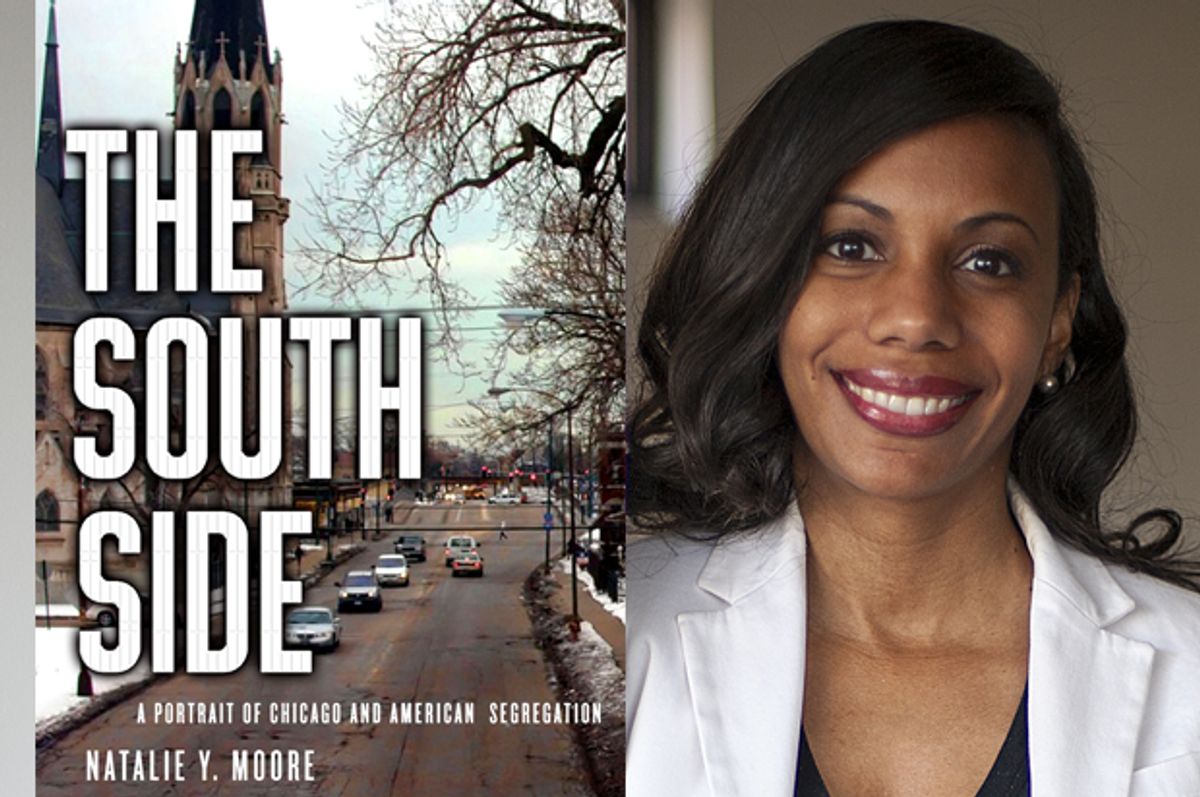 Excerpted from "The South Side: A Portrait of Chicago and American Segregation"

For as long as there is residential segregation, there will be de facto segregation in every area of life.

I hate the nickname Chiraq.

The slang term combines “Chicago” and “Iraq” (pronounced shy-rack), a sly, albeit ham-fisted, way of linking violence in the two locales. Some young people brandish the Chiraq moniker with the same kind of pride reserved for the Michael Jordan era of the Chicago Bulls. Rapper King Louie is credited with inventing the terms “Chiraq” and “Drillinois.” He’s a drill artist, and drill music is a subgenre of pulsating hip-hop originating in the South Side (hence “Drillinois.) The trend is being  capitalized on with Chiraq T-shirts that juxtapose a machine gun with the city’s skyline or the word emblazoned over a state map or decorated with the red, black and green colors of the Iraqi flag. There’s no solidarity with Iraqis, just a failed metaphor. The term has expanded beyond the city. Nicki Minaj made a “Chiraq” song featuring local rapper Lil Herb. Meek Mill made one too, featuring local rapper Lil Durk. Not to be outdone by non-Chicagoans headlining “Chiraq” songs, South Sider Katie Got Bandz freestyled her own version. All of the rappers used the same beat. When acclaimed filmmaker Spike Lee in 2015 decided to call his movie, centered on South Side violence, Chi-Raq, controversy over the name ratcheted up a notch because of the pall it casts over the city.

The movie is a satire that borrows from the Greek comedy Lysistrata, in which women perform a sex strike to stop a war. My disdain for the word isn’t about respectability politics or blocking Lee from the moviemaking tax breaks some local politicians proposed during the filming. The name “Chiraq” is more than a pop culture moment or young black people in the city reciting a harmless badge of honor. It’s actually racist. “Chiraq” plays on fear running throughout the black community. We are internalizing what we are told about black places being violent. Language impacts us. The media influences us. We fear black bodies. We fear young people of color. We become what we think we are. We think we are Al Capone 2.0 Chicago in blackface. If comparisons are going to be made between Chicago and Iraq, compare the federal spending in the Middle East with what is spent in U.S. urban neighborhoods. People who don’t live or visit these neighborhoods think there are Wild West shoot-outs on every corner. War imagery denotes tanks, bombings, assault rifles and people under siege. The metaphor ignores the real predicament in segregated neighborhoods and dismisses residents as mere anonymous war casualties.

Chicago activist Mariame Kaba once told me that by constantly referring to some communities as war zones, we trap ourselves into considering only those solutions that are steeped in a punishment mind-set. The state is then the punisher. Kaba explains:

When we adopt war metaphors to characterize how we live in our communities, we put a ceiling on our imaginations for how we might address violence and harm. After all, you can only respond to tanks with more artillery and not with a peace circle. Restorative or transformative justice requires us to build trust and to establish relationships. This is difficult to do in “war zones” where suspicion and lack of trust are the order of the day.

Chicago is not the murder capital of America, much less murder capital of the Midwest—more on murder rates versus number later. Violence in Chicago has long been misinterpreted, celebrated and racialized when in fact it’s actually a symptom of inequity. Racial and economic segregation allow violence to fester in low-income black communities. The most brutal enclaves of the city are the most troubled Chicago neighborhoods—poor, characterized by excessive unemployment, blight, food deserts, underperforming schools, high rates of preventable diseases, lack of economic development. Each year thousands of adults return to just a handful of black Chicago zip codes after they get out of prison. A large pool of parolees living in those communities adds a collective burden to those underresourced locales.

To reduce violence, the aforementioned issues must be considered. Diversions sidetrack us from productive solutions or from focusing on the systemic problems of poverty and unemployment. The myth of black-on-black crime is a red herring that ignores the fact that people who commit crimes generally commit them against people they know and near where they live. The term “black-on-black crime” downplays poverty, racial inequality and “white-on-white crime.” By keeping a running tally of shootings, local media help cultivate our sense of fear and despair. Terms like “war zone,” “Chiraq” and “urban terrorism” seep into our consciousness. According to the running narrative, violence is the default in black neighborhoods, which exhibit few redeeming characteristics, and black people are incapable of avoiding crime.

Still, Chicago has too many murders.

And America has too many murders.

Chicago does clock in more murders than any other U.S. city and is more violent than New York and Los Angeles. Yet Chicago is smaller and much more racially segregated than both of those cities.

But Chicago is not the murder capital of the country or planet. Figures from the Chicago Police Department show that homicides peaked in the early 1990s and then followed a national trend of a decrease in violent crime through the rest of the decade, and the city as a whole has seen a decrease in crime. Neighborhoods downtown, white and closest to the central city, saw dramatic decreases. Pockets of the South and West Sides worsened—areas with acute poverty, unemployment and hypersegregation. According to city public health statistics, a current snapshot of Englewood reveals that unemployment is at 25 percent. Forty-two percent of the neighborhood’s residents live in poverty; for children, the number is almost double that, and 29 percent of residents don’t have a high school diploma. ...

Contrary to what outsiders believe, black lives do matter to black people. Pundits and politicians like Rudy Giuliani, Glenn Beck, Juan Williams and Joe Scarborough enjoy upbraiding people for protesting police murders of black people instead of protesting so-called black-on-black crime. Their flawed logic asks how people can protest Trayvon Martin’s death at the hands of George Zimmerman and not protest murders in Chicago. The simple answer is that protests happen in Chicago on a fairly regular basis, but the national news cameras usually aren’t around to broadcast those moments. It’s easier for pundits to accept black pathology as the answer. But beyond the ridiculous notion that black people can’t care about various gun issues, replacing black-on-black crime with black-on-black love is a Chicago campaign dating back to the 1980s and Ed Gardner, the founder of hair care company Soft Sheen Products. Messages of black uplift and unity are as old as the Great Migration. ...

Every generation thinks the one behind them includes the worst children ever to grace the earth. Yet dismissing young people does nothing about the conditions of the neighborhoods they hail from. I also hear that music is worse today. No doubt there’s a lot of nihilistic music on the airwaves, which does contribute to a culture of violence. But when I hear Gen X-ers point fingers at today’s hip-hop mainstream music as the major culprit, I find myself amid a wave of amnesia. “Gangster rap” began in the late 1980s. N.W.A. and raunchy group 2 Live Crew’s “Pop That Pussy” alarmed the country and our parents. We argued that the music didn’t define us. While I do believe music is influential and drill artist Chief Keef needs an intervention, music didn’t create the segregated circumstances of neighborhoods that allow gun violence to burgeon. I’m still waiting to hear how music led wayward white youth to commit mass shootings in Littleton, Colorado (Columbine High School); Newtown, Connecticut (Sandy Hook Elementary School); Charleston, South Carolina; Roseburg, Oregon; and Aurora, Colorado. Music also doesn’t explain away crime over the past 50 years.

I try mightily to not wear my self-righteous truth-and-justice journalism cape. But some days these conversations test me. My father and I were at a party and one of his retired police officer friends perched on his soapbox and talked about how crime is worse and different today. “Women didn’t get killed. Children didn’t get killed,” he argued. I quietly sipped my vodka tonic because, well, what’s the point in arguing, I thought, or debunking that lie with facts? This retired detective must know he’s spewing fallacious rhetoric! The conversation moved on. Minutes later he and my father recounted hanging at a South Side lounge in the 1980s. A woman pulled a gun on a man outside of the bar. The police officer, off duty at the time, intervened. Naturally, the irony of the story was completely lost on him. When I brought up that this was a woman with a gun, he didn’t understand the correlation and looked confused. As someone gently told me, I must stop jousting at windmills.

In Chicago, police receive too much blame and credit for spikes and dips in crime. While community policing and strong community relationships are vital for the city, police officers don’t control the circumstances in which most violence occurs. Meanwhile, police credibility continues to erode in some communities. The gun violence solutions often touted by politicians involve deploying more police officers on the streets or bringing in the National Guard. For them, apparently, a heavy police state is easier than dealing with structural racism.

When unraveling the impact and implications of Chicago violence, we fail to recognize that the media have played a role in contributing to the narrative. We become what we think we are. Chicagoans are time and time again fed how violent we are, and many people internalize that cognitive belief. The perception of crime is higher than the reality. From the mob to gangs, violence has percolated through the streets of Chicago for the past hundred years. The city has seen it all before; there’s nothing new under the sun. We just don’t remember.

Books Chicago The South Side Violence