Behind the music on "Vinyl": Elvis enters the building, and "the king of rock and roll is singing about lettuce"

In episode 7 of HBO's '70s music scene drama, Richie and Zak head to Vegas to woo the king 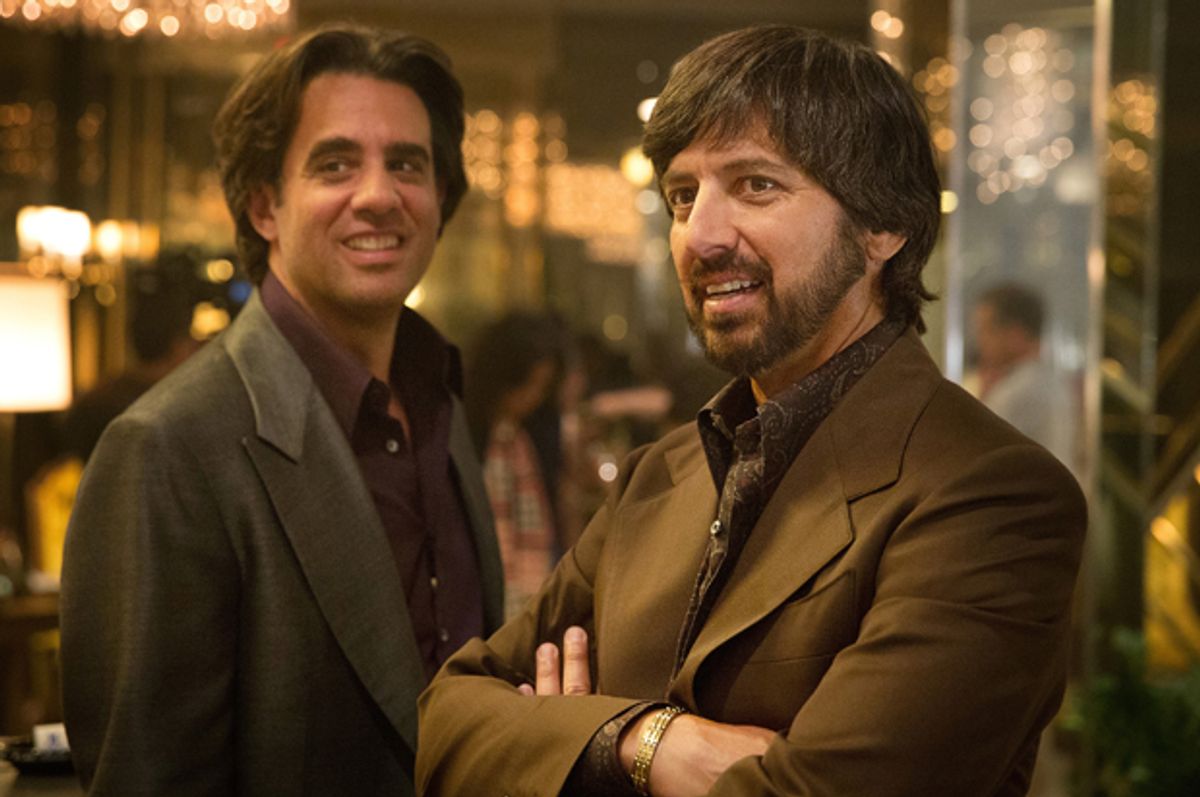 “Focus,” says Andrea Zito (Annie Parisse) as she walks into the American Century Recordings conference room. “They’re playing Wollman next week.” There’s a bunch of grousing around the table at this pronouncement. “Yodeling fans rejoice,” Richie (Bobby Cannavale) observes sarcastically. They’re not wrong--it’s just this side of a novelty number, electric guitar, yodeling, a drum solo, lots of organ, and even some flute--but Andrea is also dead on when she points out, “That 'Hocus Pocus' is hanging on just south of 40.” The song would actually reach #9 on the Billboard Hot 100 and stay on the charts for 19 weeks.

New Yorkers of a certain age will understand that “Wollman” means the Wollman Rink, an ice skating rink in Central Park that in the summertime was home for the Schaefer Music Festival (later the Dr. Pepper Music Festival), one of the greatest live music bargains ever. In 1973, floor seats were $2 and “balcony” seats (really just bleachers on a promenade above the rink) were $1.50. The lineups were amazing, the venue was general admission, and you were surrounded by the park and the skyline. If you didn’t want to pay, you could sit on the rocks just adjacent to the rink and hear pretty well. And, yes, Focus did play Wollman Rink in August of 1973, with Livingston Taylor as the opening act.

Richie and Zak head for Los Angeles to sell the American Century jet to rival record exec Lou Meshejian (John Ventimiglia), and head for an afternoon soiree at his house. It’s your stereotypical Malibu mansion on the beach; there’s someone who’s clearly supposed to be Jackson Browne; Richie walks by and leans over to say hello to “Mama” (who’s clearly supposed to be Cass Elliot, from The Mamas and the Papas) and tell her she’s beautiful. (Don’t worry, the fat joke gets made later.) And just when you’re wondering how much of the Southern California music scene they can jam into one episode, Zak says, “Hey, Richie, do you know Gram Parsons,” and your head will explode.

Parsons, of course, is the man who taught Keith Richards about country music, and who probably invented country rock. Luckily, there’s no singing involved; there are plenty of people who think that they can sing like Gram Parsons, and none who actually do. And I’m glad they told us who it was supposed to be, because embroidered cowboy shirt aside, Wesley Tunison does not look anything at all like Gram Parsons, although he does have an admirably strong command of Parsons’ soft, gently lilting Southern accent.

“Captain Manyhands,” Richie greets his companion, none other than Steven Stills (Brett Schneider). “No one calls me that any more,” Stills replies. The nickname derives from his work on the first Crosby, Stills & Nash album, where Stills played every instrument except drums and acoustic guitar. Zak asks, “Who’d you piss off at Rolling Stone,” making reference to a very candid (and thus unflattering) profile on Stills that would be published in September of 1973.

Richie gives Stills his patented “Come to American Century, home of real music,” shtick, but Stills and Parsons aren’t buying it. Instead, Parsons urges Richie to come out to Joshua Tree: “Me and my old lady are heading out tomorrow.” He then waxes rhapsodic about Cap Rock, a point of interest in Joshua Tree National Park. It’s true that Gram liked going out to the Mojave Desert, but there were other things that Gram Parsons would have been talking about at this moment (like maybe, perhaps, his well-received first solo record, which came out earlier in 1973) without needing to refer to the place where he’d overdose a few months later (September 19th, 1973), and the place where some well-meaning but over-zealous road crew would return his body after kidnapping it, so they could cremate him out in the desert. (Fans of Parsons still return to the site today, leaving guitar picks and bottles of Jack Daniels.)

Lou Meshejian (who’s an amalgam of pretty much every ‘70s record exec) launches into a coke-fueled, name-dropping spiel at Richie. He points out the presence of Stills and David Crosby, and who just walked in? Neil Young (who looks more like Jeff Bebe from “Almost Famous” than Neil at that time). Meshejian insists there’s going to be a Crosby, Stills, Nash & Young reunion; that would not actually happen (although the four did get back together and try recording again a year later). We should point out that this is happening while he’s wearing a t-shirt emblazoned with FREE CLIVE, which is a direct reference to Clive Davis’ ouster from Columbia Records for using company funds to play for his kid’s bar mitzvah, and--I quote Rolling Stone, “Interstate heroin trafficking and possible connections between payola-by-drugs and Columbia Records.”

Meanwhile, Zak has just walked by someone talking about how Elvis Presley is unhappy with his long-time record label, RCA, and is shopping around. Now, this is exactly the kind of prime, Grade A bullshit you’d expect to hear at a shindig like this. But Richie claims he’s heard rumblings too. This is where “Vinyl” turns into the Keystone Kops. Waving around $100 bills (after opening the show with hand-wringing how American Century can’t make payroll this month) Richie and Zak commandeer Meshejian’s limo to go to LAX, where they fly to Las Vegas, to go find Elvis at the Las Vegas Hilton.

You might cringe, thinking about what “Vinyl” could do to Elvis after their previous hatchet jobs, but here’s what “Vinyl” has going for them on this episode that they didn’t elsewhere: there are people who have made entire careers out of impersonating Elvis Presley. You can find Elvis impersonators for every era of Elvis, from 1950s truck driver to 1968 Comeback to what we’re seeing here, 1973 Las Vegas Elvis, more than ably portrayed by Shawn Klush. Klush has every single one of the King’s mannerisms down, the slightest onstage nuance, the downer-assisted, ever-so-wobbly stage stance, the karate chops. Klush has a strong physical resemblance to Elvis, and he also sounds uncannily like him, both when singing as well as in extended conversation.

Let’s back up a little: Richie and Zak arrive at Elvis’ hotel in Vegas in an attempt to convince Elvis to leave RCA and sign with American Century. Richie has somehow gotten ahold of Elvis’ legendary manager, Colonel Tom Parker, and convinced him to hear them out. This is achieved by some unnecessary subterfuge, “accidentally” running into the Colonel in the lobby of the hotel, and exchanging secret handshakes. The Colonel tells them they have tickets for tonight’s show, and perhaps...he’ll talk to them later. (For the record, Elvis actually did renegotiate his contract with RCA earlier in 1973, entering into a seven-record deal.)

Again, Shawn Klush does an excellent ‘73 Vegas Elvis, and it’s actually kind of amusing watching Zak absolutely lose his marbles over the deterioration of his hero. “Why is this happening, Richie? What is this?” Zak yells. “It’s ‘Polk Salad Annie’,” Richie replies. “The king of rock and roll is singing about lettuce! This isn’t Elvis. ‘I Got A Woman!’ ‘Mystery Train.’” Zak is apoplectic. “Forget JFK, MLK, Vietnam…this...this is--” And with this, Zak gets up and storms out of the showroom, entourage in tow. Richie doesn’t see the performance in the same light as Zak does, however.

Later, while Zak is off cavorting with the two women they picked up at the pool, Richie steals his way up to the penthouse. There’s a shot of him sitting in front of a box, out of which he picks up a U.S. Marshal’s badge, and a soft voice with a Southern accent voice says, “That one’s real, man.” Elvis enters the room, and sits down with a can of Tab. The King had a thing about law enforcement badges even before he became a walking drugstore, and there’s an exhibit at Graceland containing all the honorary badges he collected over the years. The one he wanted more than anything was a U.S. Marshal’s badge; there’s even a section of the National Security Archive about Elvis’ meeting with Nixon, and his request for the badge.

Richie goes into full Richie Finestra, where he’s half convincing the artist of his sincerity and half reassuring himself that he’s still a “record man.” “I’m not going to try to sell you,” Richie says, as he does exactly that. Correctly, he draws the connection from Elvis all the way up to the Nasty Bits. He does his best, trying to sell Elvis on signing to American Century: flattering, cajoling, working Elvis to get him to believe that he, Richie Finestra, has Elvis’ best interests at heart. He will get Elvis a real band to work with; together, they will make some real records. He has Elvis believing in the fantasy, and in him: “You get it, man,” Elvis tells Richie. But the Colonel shows up at the very last minute and shuts it all down, showing Richie the door in no uncertain terms.

Now, there is no way that Richie Finestra wouldn’t know that Elvis Presley didn’t make any business decisions without Colonel Tom Parker. On the other hand, at this point we know that Richie’s ego is gargantuan enough to make him think that he would be the first to negotiate directly with the King, and that his drug-based delusions of grandeur would certainly contribute to that. But, again, tip of the cap to “Vinyl,” because by the time Elvis returned to Vegas for this 1973 residency, he was fed up already. He was tired of playing multiple shows per night, tired of the Colonel’s style of management, and wanted something new. He even fired the Colonel one night in disgust, but didn’t follow through with it. It would be all downhill from here.

And, so it would seem, it will be all downhill for American Century after this episode. But there are still three more episodes left to see if the Nasty Bits open for the New York Dolls, if Zak makes a demo with the piano player from the bar mitzvah, and if Richie can manage to tank himself even further.