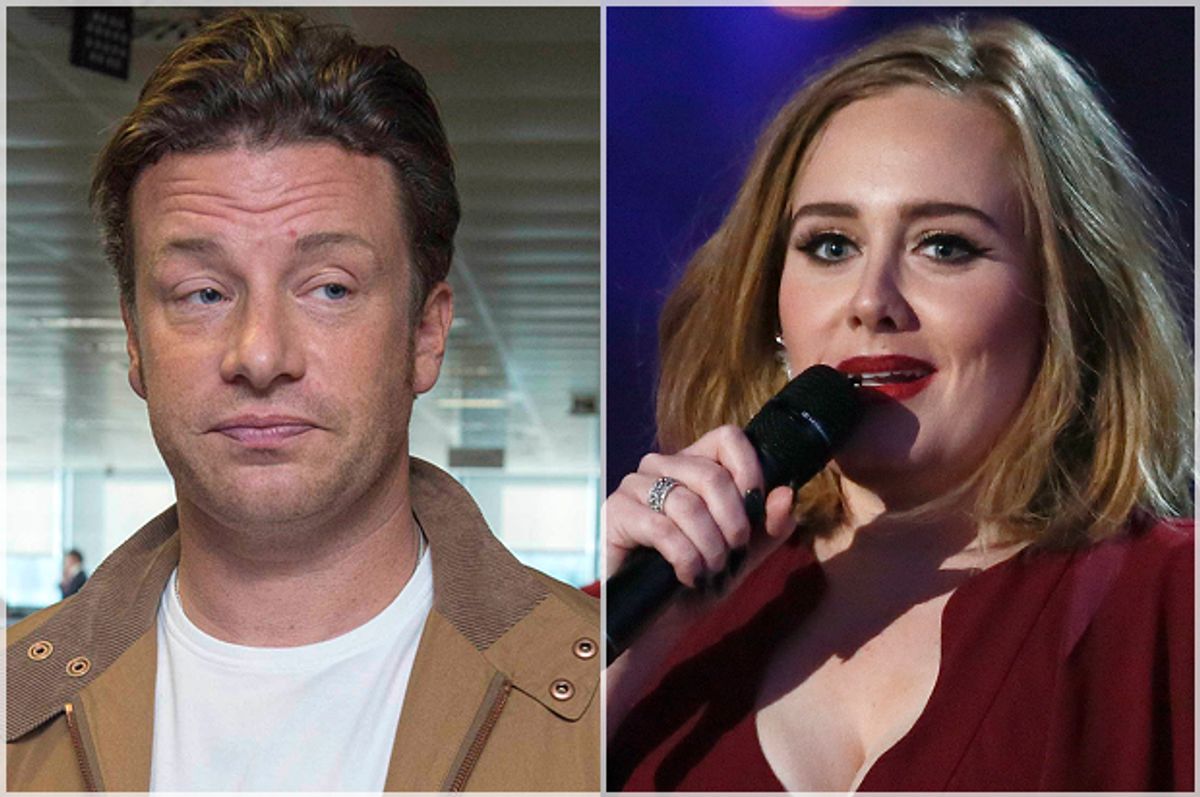 Just because Jamie Oliver is a famous chef doesn't mean he knows everything about feeding people. And when a human being who will never personally have to grapple with lactation weighs in on "easy" breastfeeding is, be grateful we have Adele around to reportedly set the record straight in her blissfully foul mouthed way.

Earlier this month, the 40 year-old Oliver — who is currently getting ready to welcome his fifth child with his wife Jools — appeared on Leading Britain's Conversation Radio to talk about the seemingly inarguable idea that "We need to support the women of Britain to breastfeed more, anywhere they want to." Yes, Jamie Oliver! Breastfeeding is a normal, natural act. All women should have ample resources and help if they need it when they're getting the hang of it, they should be able to breastfeed conveniently as they're transitioning back to work, and anyone who takes issue with a mother in public feeding her baby needs to book a ticket to the 21st century ASAP.

We are a long way from the era when new mothers were actively discouraged from nursing their babies, and here in the U.S., breastfeeding rates have continued to rise significantly over the past decade. More mothers are nursing, and they're nursing for longer. But where Oliver then overstepped a tad was when he continued, "If you think about it, breastfeeding is the beginning of the story -- before school dinners, before sugar. It’s something that’s very natural to us — it’s easy, it’s more convenient, it's more nutritious, it’s better, it’s free." And with that, a huge cry of "OH REALLY?" arose from the segment of the population that actually has direct experience with breastfeeding.

Oliver's comments quickly raised the ire of listeners, including one who summed up the problem by noting on Twitter, "because what women need is more men telling women what to do with their bodies." And by the way, plenty of adoptive and gay parents don't really need the lecture on what constitutes a "natural" and ostensibly superior way to feed babies.

Oliver later clarified his remarks saying, "I'm not planning on starting a campaign around breastfeeding" and adding, "As a father — and father to be — I would never wish to offend women or mums as I know how incredible they are and I would get a kicking when I got home!"

But then the ever outspoken Adele got into the mix with a few choice words of her own. The Sydney Morning Herald and other venues report that the 27 year-old mother of son Angelo spoke out during her recent sold out engagement at London’s O2 Arena to vent on the subject. Reportedly responding to an audience member who asked about "breastfeeding mummies," Adele bluntly said, "Do you know what? The pressure on us is f___ing ridiculous and all those people who put pressure on us can go f__k yourselves. Right." After revealing that she'd nursed her son for nine weeks, witnesses say she continued, "It’s hard, some of us can’t do it. Some of my mates got postnatal depression from the way those midwives were talking. Idiots. Breastfeed if you can, but don’t worry, [formula brand] Aptamil’s just as good. I mean, I loved it, all I wanted to do was breastfeed and then I couldn’t and then I felt like, 'If I was in the jungle now back in the day, my kid would be dead because my milk’s gone.' It’s not funny that’s how some of us think."

Rock on, Adele. Motherhood is not a competitive sport, and there's a fine line between encouraging moms and guilt tripping them — a line that is generally better left for women themselves to define. Parenting is hard enough without making mothers feel like something that can be really hard is "easy." Oliver seems now to have learned that lesson. And if he hasn't, no doubt Adele will be there to set him straight on what's "f___ing ridiculous."