Michael Ware's Iraq War doc doesn’t hold up: "Only The Dead See The End Of War" captures the horror and confusion, but skimps on analysis 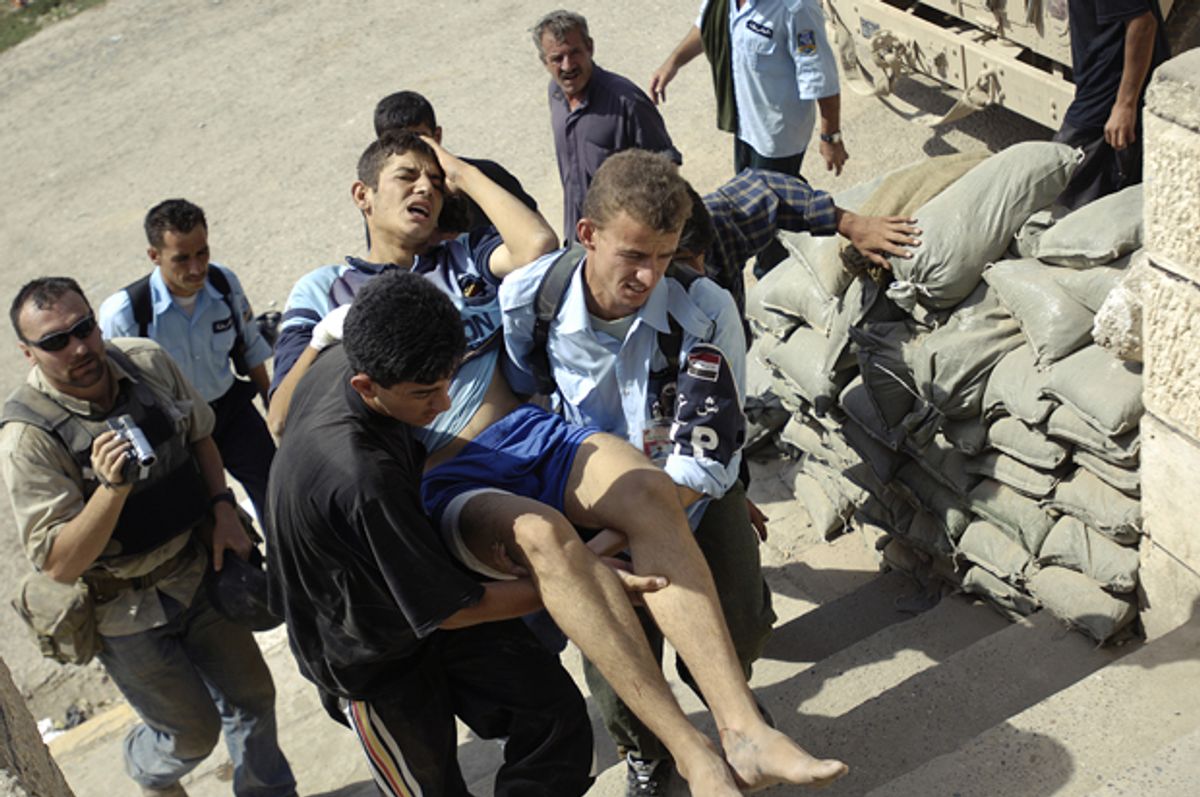 "Only the Dead See the End of War" (HBO/Franco Pagetti)
--

“Only The Dead See The End Of War” is difficult to interpret without context. This is frustrating, because documentaries, usually, are vehicles that provide context—and for the topic of fomenting insurgency during the Iraq War, context would be extraordinarily useful. The documentary’s title is a slightly different form of a famous quote from one of George Santayana’s soliloquies, “Only the dead have seen the end of war,” which is often erroneously attributed to Plato and used as the epigraph for 2001’s “Blackhawk Down.” In a confusing twist that appears to prove my point, the film was released as simply “Only The Dead,” and only has the extra words for HBO’s premiere this Monday night. Context helps. But it is hard to see context when you are in a lot of pain.

The subject of the pain in question is Australian war correspondent Michael Ware, who spent seven years in Iraq as a journalist for Time magazine. His docu-memoir, distilled from hundreds of hours of handheld-camera footage, is devoid of explanation and analysis, even while the story he is telling has profound implications for our present-day War on Terror. Ware witnessed firsthand the breakdown of national stability into factional conflict waged by militants and mujahideen; he became a trusted reporter for both the occupying military and the homegrown insurgents, one that was privy to grisly combat operations on both sides of the battlefield. But what he learned, and what the viewer could extrapolate from what he saw, is generally abandoned by the narrative itself.

Instead—and understandably so—“Only The Dead” is preoccupied with Ware’s trauma, one earned both honestly and dishonestly. The journalist’s assignment in Iraq was only supposed to last three weeks, which is when he started filming the proceedings, almost compulsively, on his camcorder. But as the weeks stretched into months, and the months into years, Ware describes feeling both trapped by the intricacies of the war and of his own “dark heart.”

“Only The Dead” features unflinching, nearly raw footage of the aftermath of violence all over Iraq—from a live feed in the press room of the United Nations headquarters there, when it was bombed, to the carnage outside the Jordanian embassy, where Ware’s handycam tracks damaged and blown apart bodies being dragged out of rubble and through crowds of onlookers. These events end up shaping the arc of Ware’s time in Iraq. His obsession with what drives men to suicide-bombing leads him to follow the rise, reign, and fall, of sorts, of Abu Musab al-Zarqawi, whose organization in the shattered remains of Saddam Hussein’s Iraq is a progenitor of today’s ISIS.

Not that you would know that from watching the film, though maybe you would guess, driving through Zarqawi-occupied Haifa Street—at one time, the commercial center of Baghdad, but when filmed, festooned with the militant’s black flags. Ware’s memoir comes from the footage he has, so his tape from that day driving through Haifa ends when one of Zarqawi’s men stops their car, pulling a pin out of a grenade to coerce them. Ware goes on to narrate his apprehension and near-execution, were it not for a few choice words and a warning. The episode haunted him so deeply that shaving—the act of putting a blade to his throat—still, he says, destabilizes him.

But for all that the series of events is a powerful one, putting it together in this way doesn’t let the impact of the kidnapping resonate. “Only The Dead” is a documentary made by a non-filmmaker, and it shows. As understandably horrible as the events were—and as obviously unfair as it is to ask for a better-quality production out of seven years spent in horror in Iraq—this film is difficult to watch and even more difficult to make sense of. The events are graphic, but disconnected, or filmed incompletely. And though that is, in and of itself, a valid stylistic choice, it’s not one that facilitates greater understanding of combat in Iraq. It might facilitate an atmosphere of increasingly unhinged chaos and despair—a kind of nonfictional “The Hurt Locker,” the 2008 Kathryn Bigelow film—but even that is undercut by Ware’s own heavy-handed narration and the too-cinematic score from Michael Yezerski.

The fact is that “Only The Dead See The End Of War” doesn’t hold up against the major, defining documentaries of the Iraq War. Alex Gibney’s “Taxi To The Dark Side” (2007), for example, is a documentary about the American War on Terror that creates rock-solid narrative out of slippery details and incomplete records; Deborah Scranton’s “The War Tapes,” from 2006, uses footage filmed by three soldiers in Operation Iraqi Freedom, creating a visual atmosphere much like Ware’s here. We are too saturated by brilliant documentary film, on all topics, to not see the flaws in “Only The Dead,” even as a purely personal journey of trauma. Ware struggles to create a narrative out of his footage, and he ultimately fails to frame his handycam experience in a way that adequately communicates its relevance.

What the film does have, though, is an absolutely haunting series of images, even when it’s difficult to understand what Ware and co-director Bill Guttentag are trying to make you understand. Ware's closeness with militants brought him to witnessing the final moments of an anointed suicide bomber being sent to blow up an American ammunition depot. His on-the-ground reporting unearthed a roadside execution, being conducted without fanfare or secrecy, in the rapidly destabilizing environs of Baghdad. And in the last half of the film, several long takes from Ware’s camera are featured without much commentary, and the result is unnervingly immersive, whether that is in a building being stormed in Fallujah under cover of darkness or—in the film’s most enduring image—a teenage boy slowly dying at the feet of a group of disinterested marines. “Hurry up and die, motherfucker,” one says. Another carelessly throws a rag over the boy's still-breathing face. Ware is fully aware of his own complicity; he does not speak up for the boy, but instead just films him twitching and gasping to death.

Following that scene, which is nearly at the end of the film, Ware apparently began to realize just how much he had lost his own humanity. According to Ware’s former colleague Phil Zabriskie, Ware (to put it inelegantly, and non-medically) lost his mind after leaving Iraq, and made this film as one of the many ways he was trying to cope with the horrors he’d seen. Ware quit working at CNN—his job after Time—because the network would not give him time off to recover from post-traumatic stress. He also later called out the network for refusing to air the footage of the boy gasping to death—a depiction of what Ware called a war crime. None of that journey makes it into the film, except for the film itself; Ware cannot quite articulate what Zabriskie describes thusly:

I never did go back to Iraq, and I certainly did not do what Ware did, but I later spent time in Afghanistan, Gaza, and other conflict zones, reporting on war, trauma—and what comes after. I carry all of it with me all the time. I know how alluring and exhilarating that sort of reporting can be, and I know what it feels like later, when you can’t sleep, can’t concentrate, and struggle to relate to people in your life, including those who love you.

That’s part of the horrible privilege of seeing the worst humanity has to offer.

Watching “Only The Dead See The End Of War” is best accompanied by the writing around the film, including Zabriskie’s piece, the film’s tepid reviews, interviews with Ware, and more context on insurgency, PTSD, and the particulars of the Iraq War. It is an unhelpfully shocking piece of filmmaking on its own, but I do appreciate that it made me find that context on my own, to struggle through reams of information to find what Ware was going on about. I wish the film were a bit more accessible, but it is impossible to deny that is deeply and purely felt.