Debbie Wasserman Schultz is loathed by Democrats, yet just got a head-scratching endorsement by Obama. Here are some guesses why

Despite being hated by many—and loved by few—the DNC chair's reelection campaign just got a needed boost. But why? 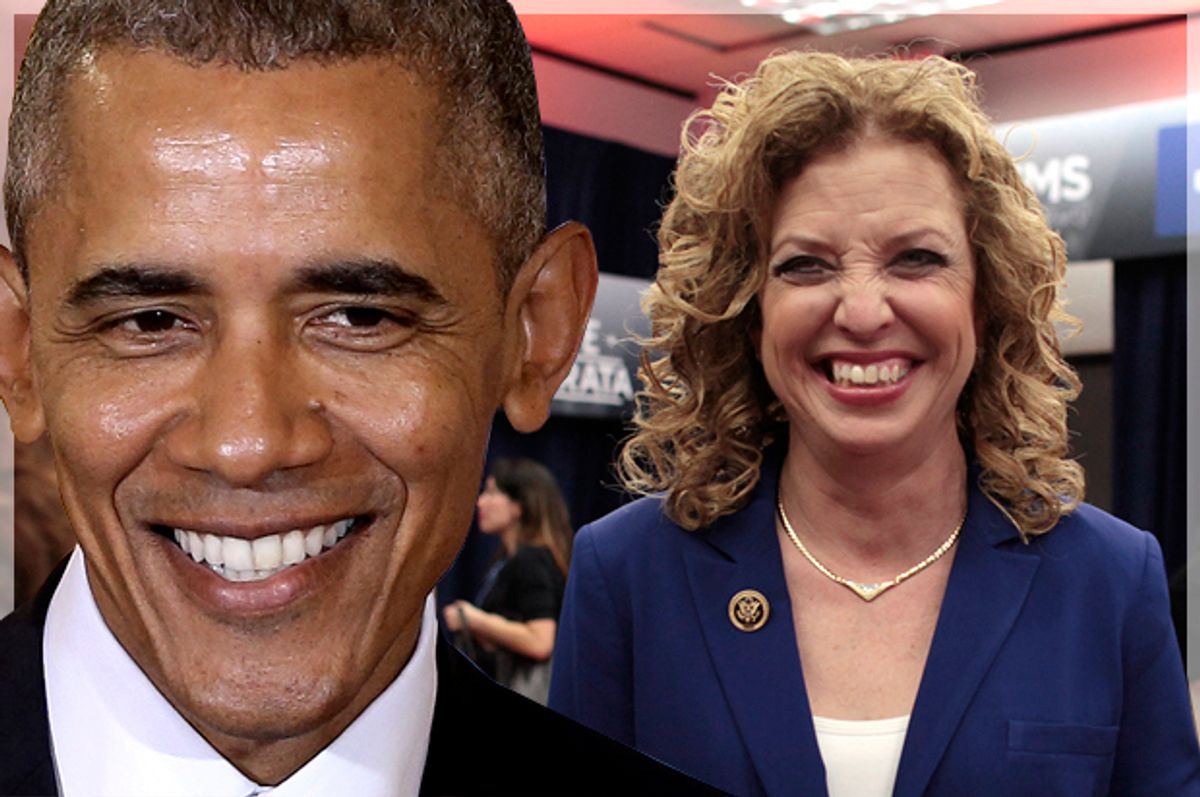 If there’s one thing that supporters of Sen. Bernie Sanders and Hillary Clinton agree on, it’s this: When it comes to her work as chair of the Democratic National Committee, a position she’s held since 2011, Rep. Debbie Wasserman Schultz is bad and should feel bad. Consensus holds that she’s either in the tank for Clinton, incompetent — or both.

And when it comes to her work as a member of Congress, where she’s lately distinguished herself as a strong defender of the generally odious payday loan industry, her record is even worse. She’s against pot decriminalization, against an “open” Internet, against Edward Snowden, against refusing donations from corporate lobbyists, and skeptical (at the least) of President Obama’s recent nuclear agreement with Iran.

She doesn’t seem to be so great with people on an interpersonal level, either:

"I think it’s most important for us, as we look at our choices as to who our next commander in chief will be, is to recognize the necessity to have a commander in chief who has foresight, who exercises good judgment," Gabbard, a U.S. representative for Hawaii, said on NBC's "Meet the Press."

There’s a reason she’s facing her first-ever primary challenge, in other words. Frankly, if you’re the kind of Democrat who worries that the party is too beholden to the wealthy when it comes to economics, and too terrified of Christian conservatives when it comes to social issues, there isn’t much about her to like.

So I think it’s fair to say that, among the left flank of the Democratic Party, this decision from President Obama is not going to be especially well received:

President Barack Obama on Monday threw his support behind Rep. Debbie Wasserman Schultz (D-Fla.), who is facing a progressive competitor in her first primary challenge for the seat.

“Debbie has been a strong, progressive leader in Congress and a hardworking, committed Chair of our national Party since I proudly nominated her to the role in 2011,” Obama said in a statement Monday morning.

So, there are a few possible explanations, here. They’re not mutually exclusive. (And, since this is high-level politics we’re talking about, they’re all rather grubby.)

One explanation is that the president did not feel like he could not endorse Wasserman Schultz without, implicitly, admitting that when he was wrong to appoint her as DNC chair in the first place. It would be an admission of error, which people are generally loath to do; but in the eyes of many politicos, it would also be a sign of disloyalty. All politicians are fair-weather friends, of course. But most try not to be so obvious.

Another, somewhat related explanation: Obama knows that Wasserman Schultz is a superstar when it comes to fundraising — indeed, this has much to do with why she’s earned herself a left-wing challenger — and, with 2016 in mind, he wants to keep her, and her financial resources, in the game. Obama’s made clear that he sees a Democratic victory in 2016 as essential to his legacy; he may be doing whatever it takes to win.

Yet one more answer? Obama is, at heart, a crypto-conservative plutocratic stooge, and he decided to endorse Wasserman Schultz simply because he agrees with her on the issues and thinks she’s good at her job. To put it lightly, this would not be my favored explanation. But I suspect some of this article’s commenters will beg to differ.