Hideous, disgusting racists: Let's call Donald Trump and his supporters exactly what they are 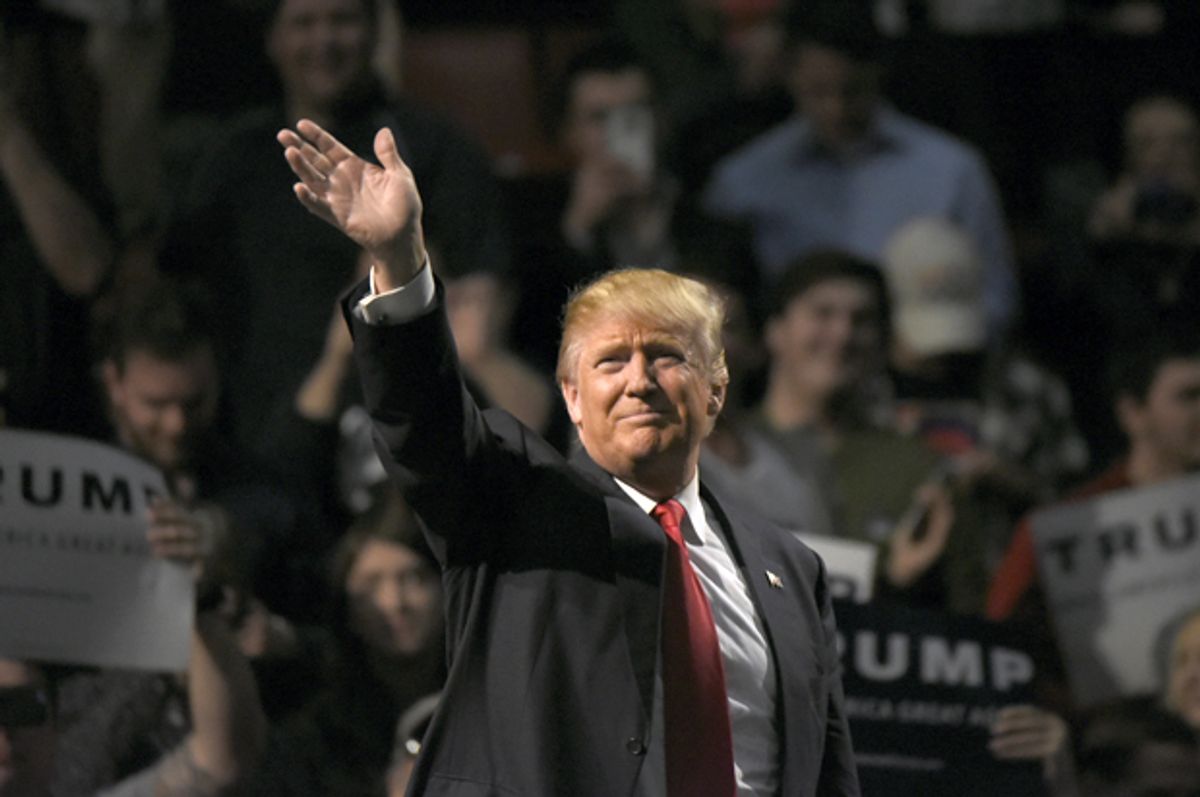 Conor Friedersdorf has written a solid essay on questions of free speech and “liberal intolerance” at The Atlantic. As someone who was heavily involved with campus politics while an undergraduate--and that also found concepts such as “safe spaces” and “trigger warnings” to be intellectually hollow and condescending--I find much to commend about “How Emory's Student Activists Are Fueling Trumpism.” However, in an otherwise compelling essay, Friedersdorf makes the following confused and contradictory claim:

Meanwhile, most observers—even those, like myself, who fully see the vile racism and xenophobia that have characterized Trump’s campaign— understand that supporting Trump 2016 does not automatically make someone a racist or a xenophobe, never mind a threat to the safety of those around them. The seeming inability of students to understand that what it would mean for them to support Trump is not what many others mean by supporting Trump—that Americans support politicians for all sorts of complicated, irrational, contradictory, quirky, unexpected, or sui generis reasons—is a major failing on the part of the students themselves and their educators.

I disagree. Donald Trump’s voters are racists; Donald Trump is a racist. The rise of a dangerous proto-fascist movement has been aided by how too many members of the political chattering class have for too long avoided stating such facts.

Moreover, Conor Friedersdorf’s claim is an example of a very perverse and twisted phenomenon in post-civil rights era America, where to call a white person a “racist” is somehow worse than the harm that racism, white supremacy, and white privilege does to the psychological, material, and physical well-being of black and brown people.

This dynamic has also prevented many in the commentariat from directly describing today’s Republican Party as the United States’ largest white identity organization, one that reflects an ideology where conservatism and racism is one and the same thing.

As I have written about here at Salon and elsewhere, “Trumpism” is not an aberration or outlier, something that is alien to, something outside of, or distant from the Republican Party. The popularity of Donald Trump in the 2016 presidential primaries, with his unapologetic racism, bigotry, and nativism, are the uncensored id of the Republican Party

In the United States, racism is not limited to the horrors of white on non-white violence of years past such as lynchings, ethnic cleansings, and pogroms. It is not confined to Ku Klux Klan members and Neo Nazis. Racism is interpersonal; racism is institutional and systemic; racism is both action and inaction.

White racial fragility and white privilege sustain the fiction that Whiteness is innocence.

Donald Trump’s proposed policies and other behavior exposes this lie.

Trump suggests that Hispanic and Latino immigrants constitute a criminal class who want to rape and murder white women while stealing the jobs of “real” Americans. Trump advocates violating the civil rights of Muslim Americans by putting them on a federal enemies list. Trump uses social media to circulate white supremacist talking points about “black crime.” Trump uses eliminationist rhetoric to gin up violence against “illegal immigrants” and “Muslims” who may be “terrorists.”

Trump is a white victimologist.

Trump is also the preferred candidate of white supremacists and white nationalists.

Likewise, white Americans who perceive a great deal of discrimination against their race are almost 40 points more likely to support Trump than those who don’t think whites face any discrimination.

In sum, Trump’s “us against them” campaign resonates in an American political environment that has long been centered on social groups and has grown even more so in the Obama era. Both white identity and hostility toward minority groups are propelling Trump — perhaps even to the nomination.

The Rand Corporation has also conducted new research that highlights the high levels of anti-immigrant sentiment (as well as misogyny) felt by Donald Trump’s supporters:

The PEPS contains a number of items commonly used in social science research to measure perceived threat from immigrants and resentment towards demands for equality by African-Americans and women. These measures are strong predictors of support for Trump in the primaries.

For example, Trump performs particularly well against his closest contender, Ted Cruz, among likely Republican primary voters who both strongly believe that “immigrants threaten American customs and values”and that “women who complain about harassment cause more problems than they solve.”

For example, among likely Republican voters who support either candidate and strongly agree that “immigrants threaten American customs and values,” 60.1 percent say they prefer Trump and 15.6 percent say they prefer Cruz. Trump's lead in support grows progressively larger moving from left to right, corresponding to groups of voters with increasingly strong agreement with the statements. The more strongly voters agree with these two sentiments, the greater the gap between support for Trump and Cruz.

Anecdotes do not have the same validity as systematic, statistically rigorous, analysis and observation. However, personal anecdotes and storytelling are also powerful types of truth claims when they complement other data. For example, The Guardian’s Sarah Kendzior offers this account of the racist vitriol at Donald Trump’s recent rally in St. Louis, Missouri:

The fans ticked off Trump’s enemies list – the NAFTA trade brokers, “the establishment”, the Republican party, Barack Obama – but rarely expressed personal hostility to anyone, even to the protesters passing by. They were “Midwestern nice” – until the doors closed, and the line became a mob.

St. Louis is as beset with racial strife as it was during the Ferguson protests, and both outside and inside the Peabody, veterans of those protests had returned to take on Trump. Protesters held signs and chanted slogans as the crowd angrily claimed them as targets. Trump fans screamed racial slurs, including the N-word, at the protesters of many races and backgrounds. Mothers and fathers put their children aside to get in fistfights with activists, and fellow Trump fans cheered them on.

Several Trump fans vowed that the next time, they would come armed. Some warned that if Trump was not chosen by Republicans, a militia would rise up to take him to power. When an evicted protester appeared at the doors of the Peabody, it was like a scene out of Shirley Jackson’s The Lottery: gazing down at a sea of rage, the demonstrator descended the stairs and the crowd tensed to pounce.

Donald Trump’s supporters (and those sympathetic to them) will summon many objections and defenses to the claim that they are racists. Some of Donald Trump’s people will say that “I am a good person and have never done anything ‘racist!’” There are many otherwise “good people” who are either active racists or passively benefit from institutional racism against people of color. It is also important to acknowledge how implicit and subconscious racism are powerful influences on both the behavior of white folks and as well as some people of color.

Others will interject that they do not like Trump’s policies but are instead drawn to his personality and how he is standing up to “political correctness”. Alternatively, Trump voters and their apologists will focus on how the Republican frontrunner is offering “reasonable” critiques of a broken immigration system, a bloated American empire, or other “reasonable” and “sensible” public policy matters that are separate and apart from his racism and bigotry.

[The right-wing news entertainment disinformation machine will predictably call attention to Trump’s black and brown (and female) human mascots, the mere presence of whom in his orbit, somehow invalidate claims that Trump is a racist and nativist (as well as a misogynist).]

Support for Donald Trump is not like selecting items from a buffet. A person cannot back Donald Trump and then opt out of responsibility for advancing his Herrenvolk, racist, right-wing agenda. And to believe that a voter can make a “principled” decision to support some parts of Trump’s political program while not being influenced by their own racial attitudes and beliefs defies what social scientists have shown about how individuals actually think about political matters.

People of color and those others who are the targets of Trump’s and his backers’ rage do not have the privilege or luxury of presuming that their fellow Americans will always be influenced by their better angels.

It may be impolitic for the mainstream corporate news media and commentariat to label “Trumpmania” as a racist movement. Nonetheless, such a description is accurate. Empirical reality should not to be held hostage by political concerns.