"It's not a cult!": Scientology looms large over "The Path," a sexy new drama about faith and doubt

Aaron Paul and Hugh Dancy star in Hulu's well-made series about life inside a fictional cult—sorry, a "movement" 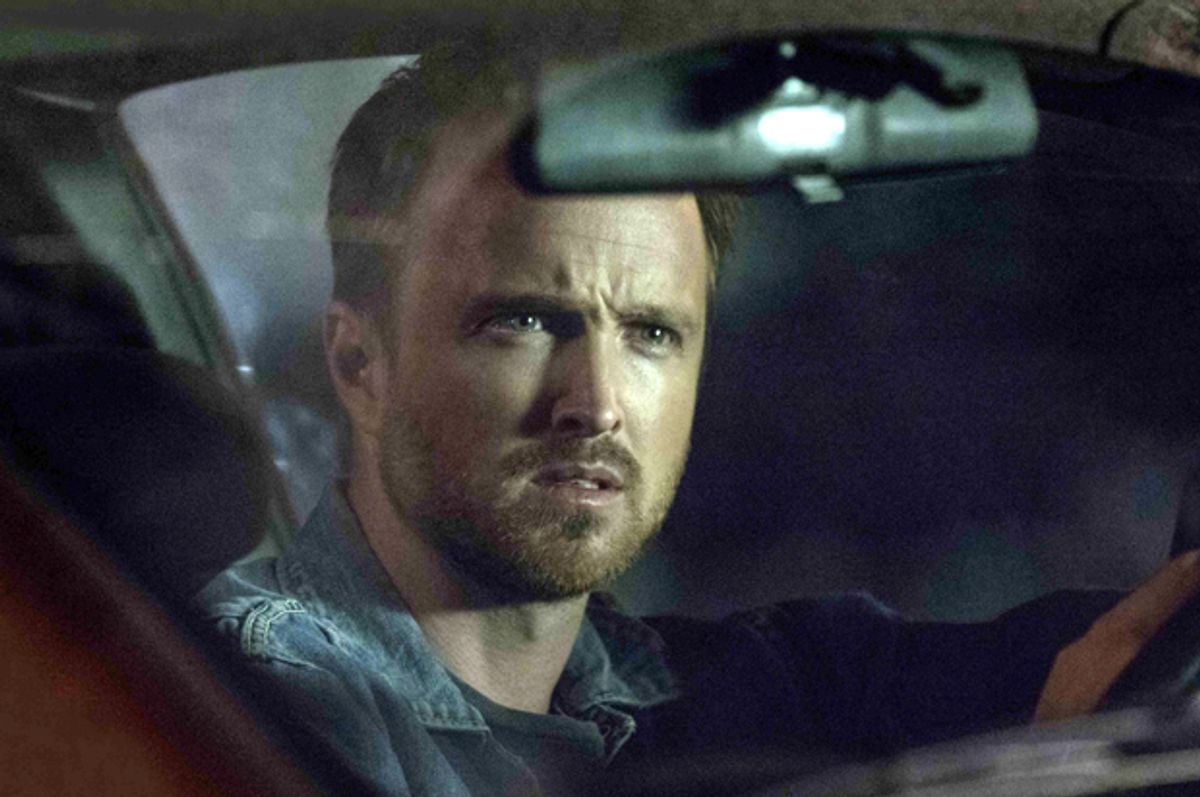 The first episode of “The Path” is the hardest, which is ironic, because in all likelihood, the first step of the show’s proverbial path—the first step of the cult of Meyerism, “The Path”’s Scientology-like “religious” “movement”—is the easiest. The seductive qualities of Meyerism’s shining ladder—the members are all identified by which rung they’ve “attained,” be it 1R, 6R, or 10R—are the most communitarian and positive at the start, when they find ways to help you cope with the regular horrors of life. It’s midway that the trouble starts; politics, manipulation, shaken belief, and the systematic ostracization of those who don’t share Meyerism’s way of life.

Which is why, to the viewer, just living in this world with these characters, no matter how well-drawn or beautifully crafted, is extraordinarily difficult. “The Path” puts its viewers through the paces of the daily life of cult living with such intimacy that it is hard to not feel the itchy restlessness of getting in too deep, or the feeling, on the back of your neck, that someone is about to corral you with an immovable yoke. The characters speak in institutional abbreviations and significant-sounding verbs; an “I.S.” is someone outside the cult, to “unburden” is to speak the truth or express full feelings, an “offset” is the good deeds a devotee does to make up for “bad” behavior. At the very least, the characters’ willingness to be wrapped up in what is clearly the self-interested ideology of a cult is bewildering and even angering. In one scene, family man (and 6R) Eddie (Aaron Paul, of "Breaking Bad" fame) reads a picture book to his daughter titled “The Ladder,” one that explains, via cheery illustrations, that the whole world is lies—except the path, of course.

“The Path” is not just about the hypocrisies of its fake cult, though. The first episode opens on Mary (Emma Greenwell), a heroin addict who is rescued from a storm-ravaged landscape and taken to the cult’s compound in upstate New York. She is offered water, medical treatment, blankets, and—when she goes into withdrawal—counseling for her addiction. There are strings attached to the help she’s given, of course. But the renewed hope and self-possession Mary feels is very real, even if the path’s faraway promise of immortality (probably) isn’t.

And this is one of “The Path”’s basic strengths. Throughout the show, as the origin stories of more and more characters come to light, it is difficult to find cynical fault with any of them—because yes, the world is pretty terrible, and anything you can find to cope with that, or otherwise help you survive it, is well within your rights. The believers of Meyerism include abuse survivors, abandoned kids, traumatized victims of gun violence, and recovering addicts, and if they find solace with something called the Ladder, well, whatever.

What’s most off-putting about the world of “The Path” isn’t the newcomers; it’s the deeply indoctrinated, the higher-up rung-sitters who have more and more to lose. And this is where we find Eddie (Paul) and his wife Sarah (Michelle Monaghan), the poster children for a happy and functional Meyerist family. Their two children are joined by Sarah’s substantial extended family, who are all also in the cult; their evening prayer, chanted in unison while holding hands, takes long, weird minutes to complete. They work for and live on the compound; they have almost no connection with the outside world. Their children are required to go to school, but at the start of the series, their 15-year-old Hawk (Kyle Allen, a dead ringer for a young Heath Ledger) is asking if he can drop out of high school to take his vows early.

And in their world, the world of the somewhat seasoned Meyerist, the combination of performatively unshakable belief and devious, manipulative acts becomes all the more pronounced. No one in the cult bats an eye at the idea of a member spending 14 days in solitary confinement, being interrogated by a higher-up cult member. The “medicine” handed out to the devotees is ayahuasca, a hallucinogenic drug that makes its users feel mystically connected to the universe. The members truly believe that their founder, the original Dr. Meyer, is immortal, and “transcribing the last three rungs of the ladder” at their outpost in Cuzco, Peru.

It’s a bunch of New Age bullshit, but as the show demonstrates, it’s New Age bullshit with teeth. People’s lives are ruined when they run afoul of Meyerism’s teachings. A woman is pulled from her home and tossed into solitary confinement. The cult sends strapping, tall believers to rough up threats or drag wayward addicts back to the path. And when another woman tries to leave the cult, she is stalked, mercilessly, albeit with a devotional smile and a hand reached out in fraternity.

The impending crisis for Meyerism—and it’s one that has affected many religious movements, including both Scientology and Christianity—is that its leader is about to die. The great Dr. Meyer is believed to be immortal by his congregants, but he is in fact dying slowly on a hospital bed in Cuzco. And even though it’s kind of insane that they really thought he wasn’t going to die, the unsettling news, as it trickles down to the believers, begins to wreak havoc on this community built entirely on faith. Above all, “The Path” is interested less in why people believe—that’s a question more for HBO’s “The Leftovers”—and more in how they process faith’s ever-present twin, doubt.

So as Meyerism’s realities punch through its glittering myths, all of the characters who are old enough and advanced enough to understand the truth begin to embody different ways of coping. Eddie opts for doubt, serving Jesse-Pinkman-devastation with his usual bewitching vulnerability. Sarah opts for even more radical belief, clinging to the ideals of the cult she was born into with a devotion that begins to look like desperation. And Cal (Hugh Dancy)—Sarah’s former lover, and the highest-runged member on the East Coast—opts for the most terrifying path of all; a descent into self-denying and self-obsessed consolidation of power.

Dancy, is, in short, playing a fictional version of what has been reported about David Miscavige, the current leader of the Church of Scientology. Miscavige has, to put it most mildly, has been dogged by controversy for his extreme practices, including the suggested forced imprisonment and/or exile of his wife, Shelley. The details are different enough that probably no one can be sued—indeed, “The Path” makes sure to reference Scientology, in order to distinguish Meyerism from it.

But the parallel is easy to draw. As Dancy plays him, Cal is a pained, ruined, desperate man, capable of great violence and great humanity. When the series starts, he is an unassuming, loserish type, drifting on the margins of Sarah’s marriage with Eddie, sniffing around for an opening. By midseason, he’s a murderous wreck, doling out punishments and making them sound like gifts. He’s so high up in the organization that he knows all of its secrets, but that only seems to strengthen his belief in Meyerism; when it comes out that he came to the compound as a 5-year-old boy, tasked with handing out pamphlets from that young age, it becomes clear that Cal has to believe in Meyerism, whatever it ends up being, because that is literally all he has in his life. A nice character beat pops up when he’s driving around in his car; he listens to self-help tapes describing alpha male dominance in the animal kingdom as an analogue for success and power in the real world. His incredibly creepy liaison with addict and refugee Mary is one of feeding off of her childlike admiration for him, with every disturbing implication that raises.

Eddie and Sarah, meanwhile, are at a crossroads at their marriage, without fully realizing it; Sarah is a singularly tiresome woman of faith, and Eddie is getting all of the tiresome parts of her now that he’s grappling with nagging doubts. “The Path” is not a particularly funny show, which can make it hard to watch, but it is—unexpectedly, perhaps—a surprisingly sexy show. Paul and Monaghan barely have chemistry while speaking, but in their frequent lovemaking, they are able to exhibit the almost teenage passion that first brought them together. Showrunner and creator Jessica Goldberg came up under “Parenthood” and “Friday Night Lights” showrunner Jason Katims (who is also an executive producer for “The Path”), and it shows: The family intimacy and sincere empathy for the trials of everyone under Eddie and Sarah’s roof smack of the community-oriented, regular-people dramas that have defined Katims’ career. One of the most affecting plots in the show is Hawk’s crush on a classmate, simply because it is treated with such breathless, innocent joy.

And hearkening to that history of beloved network shows, “The Path” does not feel like a run-of-the-mill streaming-platform drama, which often have poor episode definition and result in saggy, overlong seasons. It could stand a touch more editing, probably. But if anything, “The Path”’s individual episodes of the five I watched have stronger beginnings and endings than HBO’s “Vinyl” or Fox’s “Empire.” Despite having a lot of creative freedom, the show is pointedly well-made—from the way certain religious experiences are filmed, which lend them that bewildering, otherworldly quality that is so seductive, to even the sound mixing in some scenes that creates a soundscape backing the characters that reminded me, incongruously, of Shane Carruth’s “Upstream Color.” I do tire of shows that are so gloomily serious that watching them feels like taking a shot of strychnine—remember how funny “The Sopranos” was? “The Wire”?—but with “The Path,” the lack of humor seems deliberate, instead of a way to grasp at the atmosphere of “prestige drama.” (The funniest thing that ever happens in the show is the repeated line, when an outsider calls Meyerism a cult, to reply, with pained indignation: "It's not a cult!") The characters have trouble laughing because they believe themselves to be a somewhat beleaguered minority of truth-tellers; what they express instead is a whole lot of sexual energy, which is, I guess, one way to do it.

I’m interested to see where “The Path” goes with its musings, because although it took me a while to accept the premise of the show, I cannot deny that it is well-made and thoughtful, if mostly concerned with the thoughts and feelings of very frustrating people. I imagine that “The Path”’s lawyers are working very hard to separate the show from Scientology, staving off lawsuits however they see fit; to my mind, though, the show attains actual relevance because it does hit so close to reports about the actual institution. As long as we are living alongside and tolerating a powerful religion with any number of reported abuses to its name—indeed, in a world where we live alongside religious fanatics of every stripe, including the militant atheists—it is perennially involving to wonder why people believe the way that they do. Sometimes faith feels like the most explored facet of human nature, and sometimes it feels like the only facet that still is a complete mystery.