John Kerry's right about Donald Trump: He's an "embarrassment" and terrifying the rest of the world 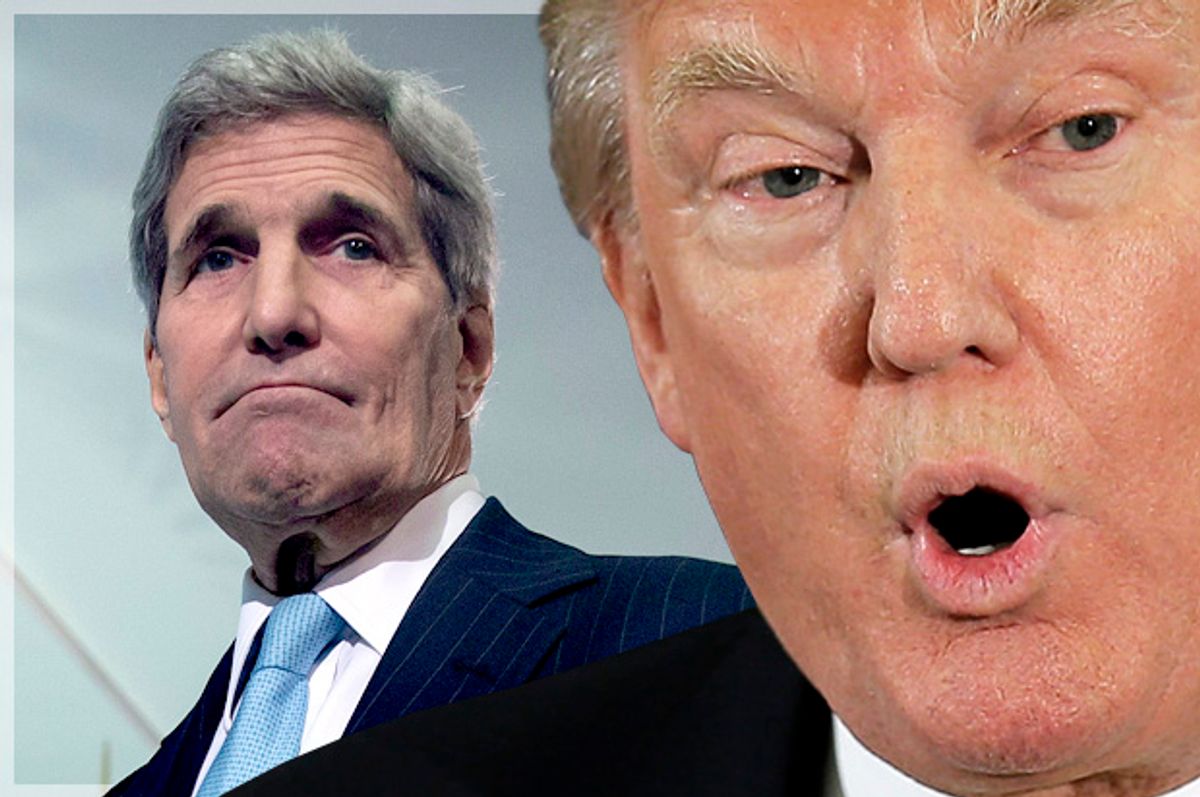 A Donald Trump presidency is terrifying not only because he doesn't know what he needs to know but also because he doesn't care that he doesn't know. Ignorance is pardonable. For Trump, however, ignorance is a source of confidence. He's dangerously unprepared for the job he's seeking, a job with enormous power and risk. This is part of Trump's appeal with voters who want America to “win” but have no idea what that looks like. If anything, Trump's passionate ignorance is a kind of validation of this attitude. He offers an absurdly simplistic solution to an absurdly complex set of problems, and that resonates with people for whom anger is a substitute for information.

In two recent interviews, one with The Washington Post  and the other with The New York Times, Trump spoke at length about foreign policy and national security concerns more generally. Here, more than anywhere else, his appalling amateurishness is apparent. To read either of these exchanges is to learn just how far you can go in American politics without comprehending how the world actually works.

Trump says things that are unrealistic but could pass as sensible to someone totally unaware of the realities on the ground. Nearly every word he utters about trade and foreign policy could not be said by an adult with a passing knowledge of geopolitics. For instance, he wants America to pull out of NATO, practically overnight, because we pay "too much" and nobody else does anything. “At what point do you say hey, we have to take care of ourselves. So, you know, I know the outer world exists and I'll be very cognizant of that but at the same time, our country is disintegrating, large sections of it, especially in the inner cities.” The underlying sentiment here is fine, and we should reduce our global footprint, but America can't simply disengage like this. There are alliances, obligations, and agreements that militate against this sort of isolationism. There's a global order that can't be undone without dramatic consequences.

Jeffrey Goldberg's reaction on CBS's “Face the Nation” sums it up:

“I gleaned that he [Trump] has no understanding of the post-war international order that was created by the United States, that he has no understanding of why we maintain alliances with such treaty partners as Japan and South Korea, Britain, NATO, and the importance of maintaining those stable relationships with other democracies...It was really remarkable to imagine that someone who shows so little interest in understanding why the world is organized the way it is organized is this close to the presidency of the world's only superpower.”

No one this blinkered or willfully uneducated has been anywhere near the Oval Office before, and yet Trump is inching closer to it every day. And it's becoming an international disgrace, with no real parallels in American history.

Secretary of State John Kerry also appeared on “Face the Nation” this weekend, calling Trump and the broader Republican campaign an “embarrassment” that is creating doubts about America's reliability abroad. “Everywhere I go, every leader I meet,” Kerry said, “they ask about what is happening in America. They cannot believe it. I think it is fair to say that they're shocked. They don't know where it's taking the United States of America. It upsets people's sense of equilibrium about our steadiness, about our reliability. And to some degree, I must say to you, some of the questions, the way they are posed to me, it's clear to me that what's happening is an embarrassment to our country.”

That a sitting secretary of state is willing to speak publicly in these terms about the leading Republican candidate for president is revealing. It's a reminder of how unusual this election is, how bizarre and preposterous it has become. A serious country with wise institutions and a viable process would not permit such madness as Trump. It's all the more troubling when you consider, first, that Trump has no intention of educating himself and, second, that the hordes of voters applauding him care even less than he does about that.

Trump is everything Stephen Colbert pretended to be – dumb, cocky, gleefully illiterate. He won't hit the books because that's what losers who can't cut deals do. And the people who love him are happy to count themselves among the winners. Every confident idiot in this country has found inspiration in Donald Trump, and he's going to ride that wave of idiocy as far it'll take him, which appears to be a coin toss away from the White House.