Sarandon joins Louis C.K. in being just fine with a possible GOP win that would put the less-privileged in jeopardy 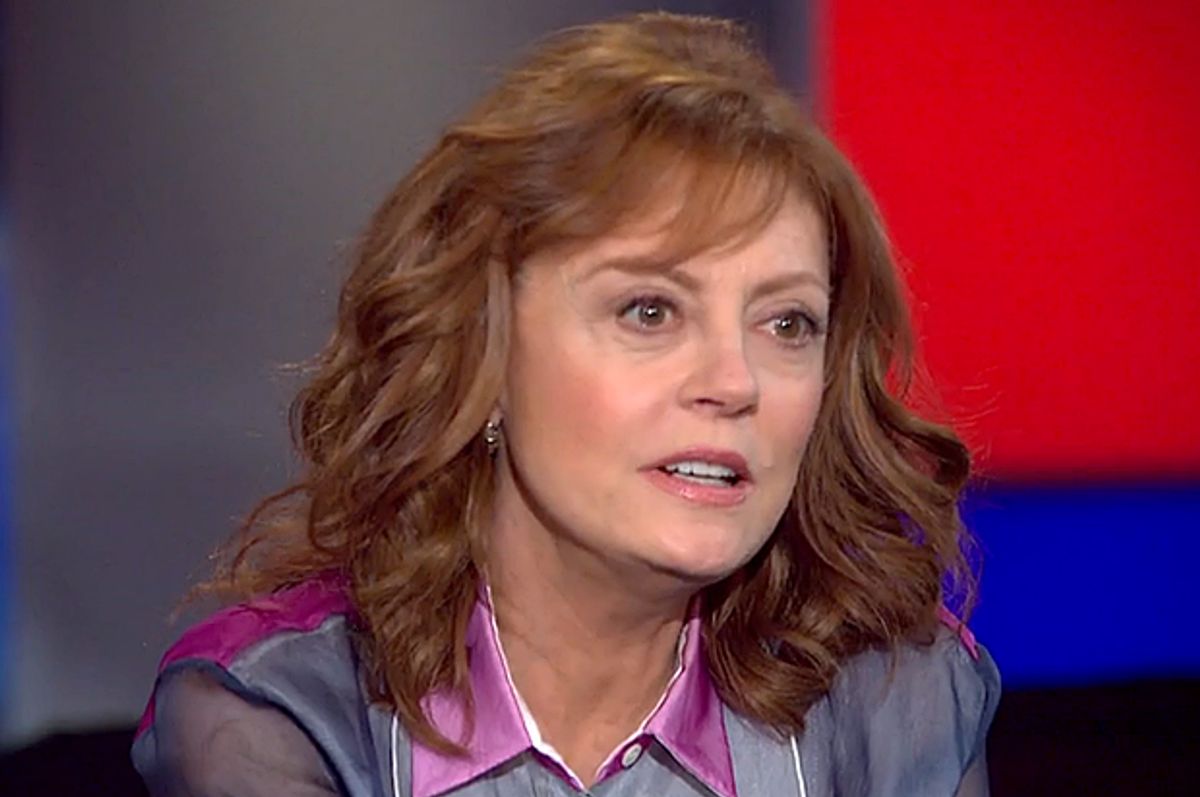 Celebrities — they're not just like us! They're not regular people! Even the ones who seem likable and earthy, who probably are pretty likable and earthy, still live in a totally different America than the rest of us here in the 99 percent. Case in point — imagine being well enough off to not be scared out of your mind right now about the outcome of the 2016 election.

Susan Sarandon doesn't seem to be sweating it. Sarandon — who three years ago declared, "I think of myself as a humanist because I think it's less alienating to people who think of feminism as being a load of strident bitches and because you want everyone to have equal pay, equal rights, education and healthcare," is a Bernie Sanders supporter. But in a Monday conversation with MSNBC Chris Hayes, she went further, saying that "I think Bernie would probably encourage people to [support Hillary if he loses] because he doesn’t have any ego in this thing. But I think a lot of people are, 'Sorry, I just can’t bring myself to.'"

When pressed how she'd vote if it came down to Clinton or Trump, she admitted, "I don’t know. I’m going to see what happens," adding, "Some people feel that Donald Trump will bring the revolution immediately if he gets in, things will really explode… If you think it’s pragmatic to shore up the status quo right now, then you’re not in touch with the status quo. The status quo is not working."

Well, sure, the status is not quo. But it must be super nice to be a highly-paid Oscar winner who at nearly 70 can still be a L'Oreal brand ambassador and feisty fashion role model. It must be nice to espouse liberal causes but also feel secure that you'll be fine if everything goes entirely to the dogs. Your family wouldn't be deported. Escalating racism? Not your problem. A misogynist in the White House setting the tone on how to talk to women? Wouldn't affect your career or personal safety. Your health insurance wouldn't be lost. You wouldn't lose your job or your mortgage. You have no student loans to default on. You could, you might imagine, safety watch "things really explode" from your West Village penthouse. That's a privilege the rest of us don't have.

And that's a privilege that other celebrities who've been outspoken about politics have forgotten, too. Look at Louis CK, who did a hilariously populist riff on the underpaid documentarians living in "crappy apartments" at the Oscars — and whose own multiple residences include a $2.44M summer house on Shelter Island. Unlike Sarandon, the comedian is clear in his contempt for Trump, bluntly telling his fans recently, "The guy is Hitler."

But then he went on to say, "And I’m not advocating for Hillary or Bernie. I like them both but frankly I wish the next president was a conservative only because we had Obama for eight years and we need balance." Yes, he rather optimistically explained that "but it only works if the conservatives put up a good candidate. A good smart conservative to face the liberal candidate so they can have a good argument and the country can decide which way to go this time." He, however, seems to have the luxury of forgetting that the leading contender after Trump is literal lord of the underworld Ted Cruz, who's so gonzo to roll back whatever gains women, minorities and LGBT persons have made over the past several decades that he's currently occupying more nightmares than Pennywise the Clown.

If "we need balance" or a "revolution" so much, does that mean rich celebrities will spend the next four  years living like the other half? Didn't think so.

The future of America, for those of us who live in it and aren't award-winning millionaires, is not some abstract experiment. These are our lives and livelihoods and loved ones and basic human rights to dignity and respect on the line. And if you're successful enough to have forgotten that, at least do us the favor of keeping quiet about it.