Yes, privacy is important—but not as important as exposing hypocrisy from those whose policies harm the vulnerable 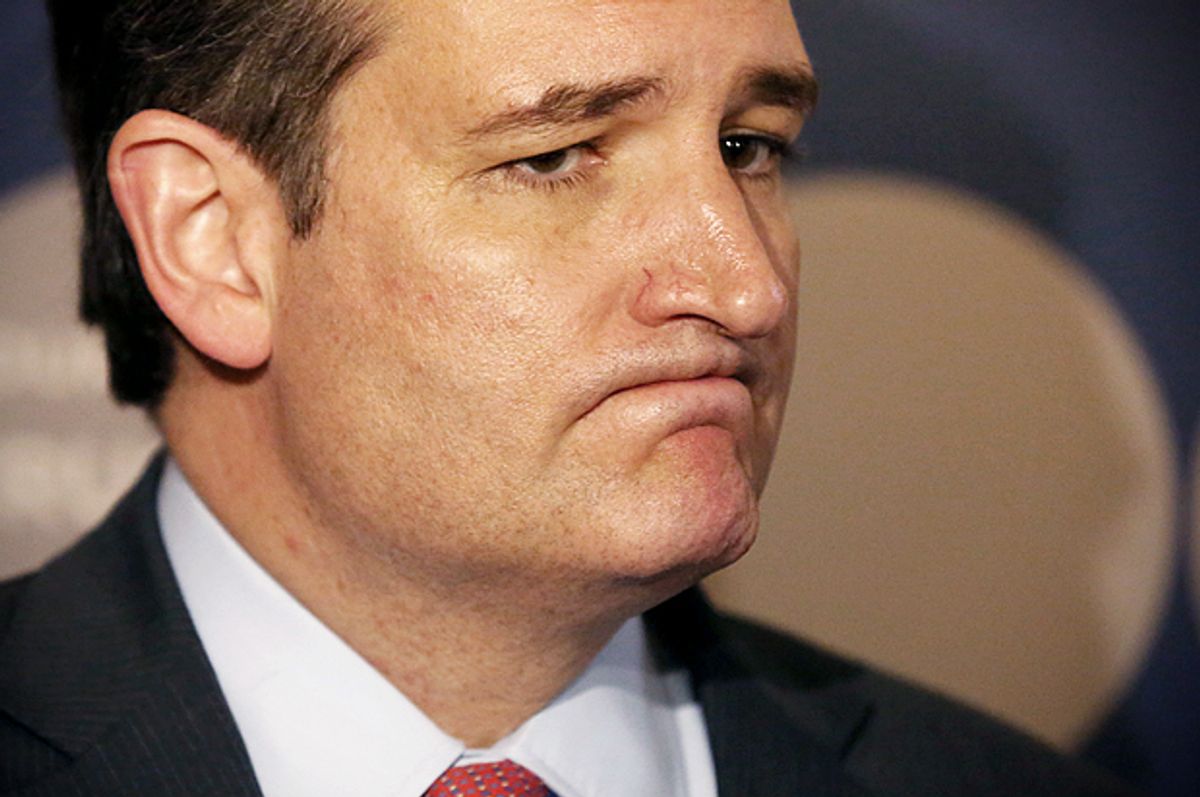 When is an affair just an affair? And when is someone’s private sex public business? Those are the questions of the moment following two sets of high-profile allegations involving Republican politicians engaging in extramarital relations. Last week, the National Enquirer alleged that GOP presidential candidate Ted Cruz had been “caught cheating” with five mistresses, choosing not to identify the women by name. Earlier in the week, a story broke that Robert Bentley, Alabama’s virulently anti-gay governor, was having an affair with Rebekah Caldwell Mason, his married chief of staff. As Neal Broverman reports for the Advocate, rumors of their affair had been circulating in Washington for years. Both deny the allegations.

Many believe that what takes happens in the bedrooms between consensual adults should stay there, even when it’s politicians whose policies we disagree with. My colleague, Mary Elizabeth Williams, argued that this is hardly the worst misdeed Cruz has ever committed; however, in our extremely sex negative culture, it may be the one that ends his White House run. “[O]f all the reasons that Cruz shouldn’t be president, is an accusation that he slept with other women really the one he ought to go down for?” Williams asks. She astutely notes that—given the possibility that the report was leaked by a Trump staffer—the story is “intriguingly timed, to say the least.”

Should it prove legitimate, inquiry about Ted Cruz’s sex life is more than just “gossip”—as Politico’s Jack Shafer likewise suggested. Cruz’s alleged affairs are worthy of inquiry for the same reason that it’s news when closeted Republicans like Larry Craig foot-tap for sex in an airport bathroom or Randy Boehning is caught on a gay hookup app: Their lies hurt people. Their duplicity, often cloaked in “family values” political rhetoric, profoundly affects the LGBT populations against whose interests they consistently voted, even while engaging in the exact behavior they deemed despicable. In 2006, Craig—the now-disgraced Idaho Senator—supported adding an amendment to the Constitution that would ban same sex-marriage.

There’s a great rule of thumb on the subject, known as the Barney Frank Rule. “I think there's a right to privacy,” the retired Congressman once explained to Bill Maher. “But the right to privacy should not be a right to hypocrisy. People who want to demonize other people shouldn't then be able to go home and close the door, and do it themselves.” In 2014, journalist Itay Hod posted about former Illinois Representative Aaron Schock—who was long rumored to be gay—on Facebook. Many, like Huffington Post’s Michelangelo Signorile, argued that questions about Schock’s sexuality were worth asking because of the flamboyantly attired Republican’s terrible history on LGBT equality. He earned a zero rating from the HRC.

Exposing the hypocrisy of Republican legislators not only makes our political system more honest—it can actually change behavior. After Boehning was outed by Dustin Smith last year, following a chat between the two men online, the North Dakota politician actually told reporters that the leak was a relief: “The 1,000-pound gorilla has been lifted.” Boehning further explained that his prior anti-gay legislative decisions (including voting against a 2015 gay rights bill) were in service of a coverup. “This has been a challenge for me,” he told The Forum. “You don’t tell everyone you’re going to vote one way and then switch your vote another way—you don’t have any credibility that way.”

In contrast, it’s considered gauche to expose the private life of a well-known figure when that information isn’t in the public interest. This practice is often called “outing,” correctly derided as a reactionary tactic that shoves LGBT celebrities out of the closet before they are ready (see: Lance Bass, Neil Patrick Harris, George Michael) for little reason other than our own smug satisfaction. Say, if Brad Pitt were secretly gay, would there be much utility in exposing him? Not really. Pitt’s hypothetical decision to live in the closet would have little effect on anyone else, aside from his own family. He isn’t in a position to legislate against the rights of LGBT folks or do others harm because of his lie.

Mike Rogers, the journalist at the center of the 2009 documentary Outrage, once explained it as the difference between outing and reporting: “Outing is the indiscriminate disclosure of someone’s sexual orientation without his or her consent,” he wrote in Politico. “Reporting is not at all indiscriminate—and it has a higher purpose.” To ask serious questions about Ted Cruz’s private life isn’t just a smear tactic by his opponent in a contentious Republican race, even if Cruz would like you to believe this is the case. It’s what journalism is supposed to do. It speaks truth to power, especially when that power is used inappropriately.

To hold Republican politicians accountable for their infidelities is to hold them to the same standard that they do millions of Americans across the country. Cruz has been a virulent opponent of reproductive rights for women: He opposes all forms of abortion, even in cases of rape, incest, or where the procedure would save the mother’s life. Cruz has particularly been an outspoken critic of Planned Parenthood, calling it a “criminal enterprise.” He has even opposed contraceptives like Plan B, repeatedly referring to the morning-after pill as an “abortion-inducing [drug].”

That’s, of course, just the tip of the iceberg. Ted Cruz has been a fervent opponent of marriage equality, supporting an amendment that would overturn the Supreme Court’s 2015 decision to allow same-sex couples to wed. The Texas Senator has consistently fought these rights based on a so-called “family values” stance. “We will see the destruction of traditional marriage, and the family is the foundation of society,” Cruz told Breitbart earlier this year. “If the family is destroyed, society will be destroyed.” He has also argued that gay marriage hurts children, even though every ethical study on the subject has shown that kids raised by same-sex parents do just fine. (They actually outperform their classmates.) You know what does hurt kids? Infidelity.

There are a number of reasons Ted Cruz’s sex life matters. But more than anything, Cruz’ alleged infidelity—if the National Enquirer story turns out to be accurate—would further reveal what a charade the political party of “family values” really is. When it comes to sexual impropriety, the Daily Beast points out that the GOP solidly “trumps” their Democratic rivals: Between the years of 1990 and 2010, the outlet found that Republicans were responsible for the majority of sex scandals. When it came to the particular fact of sexual hypocrisy, the conservatives overwhelmingly snowed their liberal competition—by a 2:1 margin. No matter who today’s no-good, cheating politician happens to be, numbers like those will always, absolutely be worth a conversation or two.