Horrors of the Trump doctrine: Inside the GOP frontrunner's terrifying interview with the NY Times

Can there be any doubt about how dangerous it would be to elect this man as commander in chief? 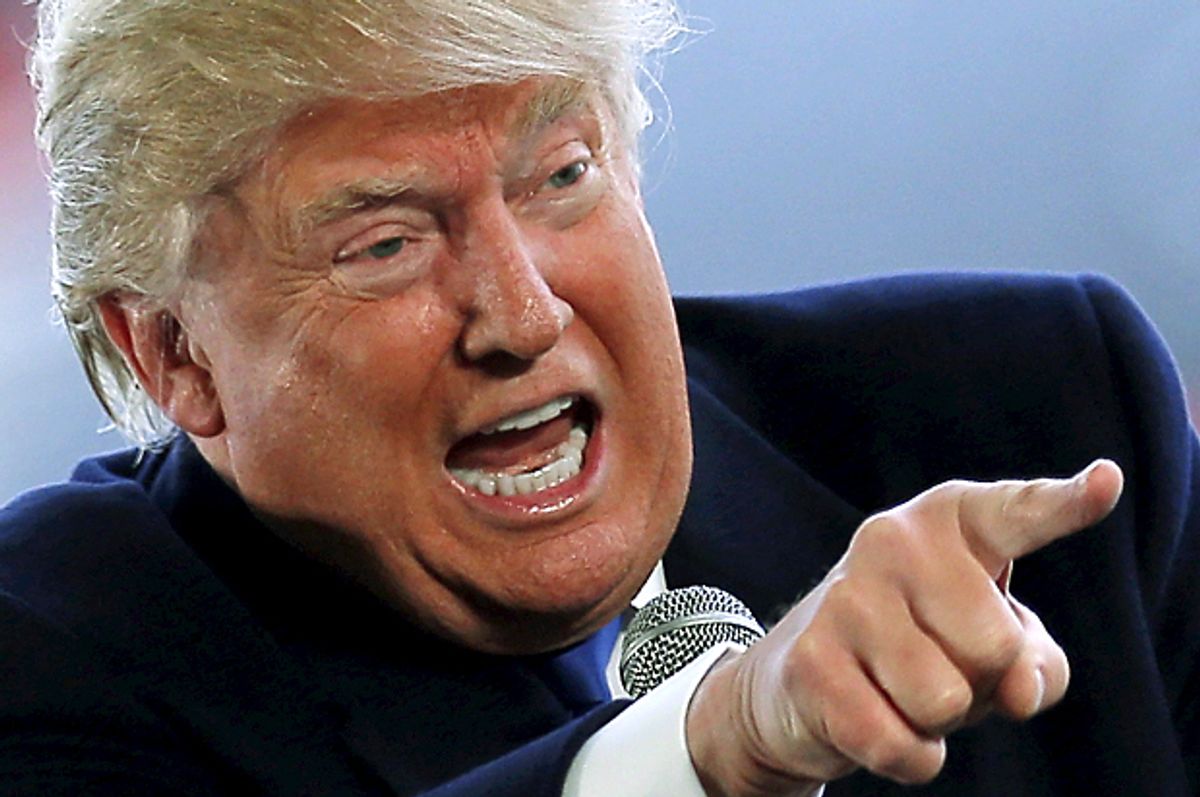 Donald Trump managed to shock the world once again. Last week, he actually sank so low that he publicly attacked Ted Cruz's wife Heidi's looks. Not that anyone thought he wasn't the type to say such rude things.  He's made a habit of it for many years. But he is running for president and, more importantly, he did this during a period when all eyes were on Europe in the wake of another devastating terrorist attack, and he was simultaneously criticizing the president for continuing on his historic diplomatic mission to Cuba and Argentina. But that wasn't what shocked the world. What has put every government on the planet on high alert was his alarming interview in the New York Times on the subject of foreign policy.

We already had some inkling of his general incomprehension in this regard throughout the campaign as he cavalierly talked about torture, the banning of Muslims, and "bombing the shit out of" our supposed enemies. I wrote previously about his bizarre trek to the the capitol to speak with the Washington Post and AIPAC earlier last week. But as MSNBC's Lawrence O'Donnell said on his show Monday night, the interview in the Times over the weekend was "like taking a world tour of Donald Trumps ignorance."

Trump spoke with reporters David Sanger and Maggie Habermann on the telephone for over 90 minutes and on virtually every question they asked he was clearly vamping like a 12 year old giving the book report on a book he hadn't read.  Romney spokesman Kevin Madden characterized the transcript of the interview as being "just full of tautological nonsense."

He complains incessantly about the money the U.S. is spending on security, which is fair enough, but his solution is to put a gun to the whole world's head and demand they pay up or the U.S. will let the world burn. Trump is  calling for the U.S. to stop being the world's policeman and start being the world's mobster extortionist: nice little country you've got here, be a shame if anything happened to it. After all, he's calling for a gigantic increase in military spending, which doesn't make a lot of sense if he's believes we should pull back from the world. Indeed, he never says the US should pull back at all. He's just going to blackmail the world into ponying up the cash for the huge buildup he's planning and if they don't agree, they'll be sorry.

Basically, he thinks of world affairs the same way he thinks of his political opponents. It's all about whether they've been "friendly" to him. When asked if he would be willing to lend humanitarian aid he said:

You know, to help I would be, depending on where and who and what. And, you know, again — generally speaking — I’d have to see the country; I’d have to see what’s going on in the region and you just cannot have a blanket. The one blanket you could say is, “protection of our country.” That’s the one blanket. After that it depends on the country, the region, how friendly they’ve been toward us. You have countries that haven’t been friendly to us that we’re protecting.

Too bad about the humans inside those countries. But then empathy isn't his strong suit.

He constantly berates George W. Bush for "destabilizing" the Middle East (which is correct) but it never occurs to him that the consequences of say, telling Japan and South Korea to go build their own nukes or putting NATO in mothballs because it costs too much money might just have the effect of "destabilizing"   the entire planet.

Like a child, when he can't think of an answer to a difficult question, he claims he doesn't want other countries to know his plans so he won't share them with the press, but he does seem to truly believe that it makes sense for the United States to be "unpredictable." Nothing could be further from the truth. A nation as powerful as the U.S. has to be as transparent as possible or allies and enemies alike will find it untrustworthy and provocative. We have enough problems with our national security state as it is --- caprice is the last element we need to put into the mix.

For 70 years the world has been organized around the idea of collective security backed by the United States. The idea was to prevent another world war and, even more importantly, a nuclear war. There have been huge downsides to that project but withdrawing from that abruptly out of pique or withholding our protection unless they pay up would be disaster. In the eyes of the rest of the world, the U.S. will have become a rogue superpower that has to be stopped.

There are plenty of good reasons for a presidential candidate to question our military commitments and seek new ways to secure the stability of the country and the planet. But sane people should no more turn to this man to do that than they would turn to the Olson twins. It's very, very dangerous.

Perhaps more telling than any of this, though, is Trump's equally thoughtless appropriation of the term "America First," last heard in common usage by anti-semite xenophobe Pat Buchanan, but which originally was the name of an isolationist group that put pressure on President Roosevelt to keep America out of World War II. It was mostly a respectable group of citizens but there were some at the top, notably flying ace Charles Lindberg who had more than a little bit of fondness for Hitler's Germany. Trump might want to steer clear of any more of those associations. His mass deportation and torture policies are already close enough.

"America First" undoubtedly sounds great to a lot of people and it's not unreasonable or unusual for a candidate to argue for a foreign policy that puts national interest before global interest. It's not even unprecedented for a candidate to run as a "Fortress America" isolationist calling for a withdrawal from all global obligations. But if anyone thinks the man who says this is the type of person who will turn the other cheek and refuse to respond unless our shores are directly threatened, I think they do not understand this man's character:

Look at what China’s doing in the South China Sea. I mean they are totally disregarding our country and yet we have made China a rich country because of our bad trade deals. Our trade deals are so bad. And we have made them – we have rebuilt China and yet they will go in the South China Sea and build a military fortress the likes of which perhaps the world has not seen. Amazing, actually. They do that, and they do that at will because they have no respect for our president and they have no respect for our country.

He went on to blather incoherently about negotiating some trade deal in retaliation and using it as a bargaining chip but in the end he said he wouldn't want them to know if he was prepared to go to war over these islands. That unpredictability again.

Donald Trump is actually entirely predictable. He has laid it all out many times. He commonly threatens people, telling them to "be careful" or they'd "better watch out." You can bet money that when he feels disrespected, this is exactly what he will do:

Trump has expressed true admiration for only four leaders: Generals Douglas MacArthur and George S. Patton, both of whom were removed from duty for exceeding their authority, and authoritarian strongmen Vladimir Putin and Kim Jong Un.  He says all the time, "We've got to be strong," by which he means dominant.

These foreign policy interviews have not shown us an "America First isolationist" by the historical definition and people would be foolish to see those allusions in any literal way. He wants America to be a gangster protection racket, holding up other countries for money lest they "disrespect us" by refusing. If that happens he's going to have to "hit hard," because "other people watch."

This is all just the tip of the iceberg of the ignorance, incoherence and lunacy on display by the GOP frontrunner and everyone who follows politics should read the transcript of this stunning interview. You can bet that every foreign leader has read it and is already making contingency plans. Secretary of State John Kerry said on "Face the Nation" on Sunday:

Everywhere I go, every leader I meet, they ask about what is happening in America. They cannot believe it. I think it is fair to say that they're shocked. They don't know where it's taking the United States of America. It upsets people's sense of equilibrium about our steadiness, about our reliability. And to some degree, I must say to you, some of the questions, the way they are posed to me, it's clear to me that what's happening is an embarrassment to our country.

It's not just an embarrassment. It's dangerous.