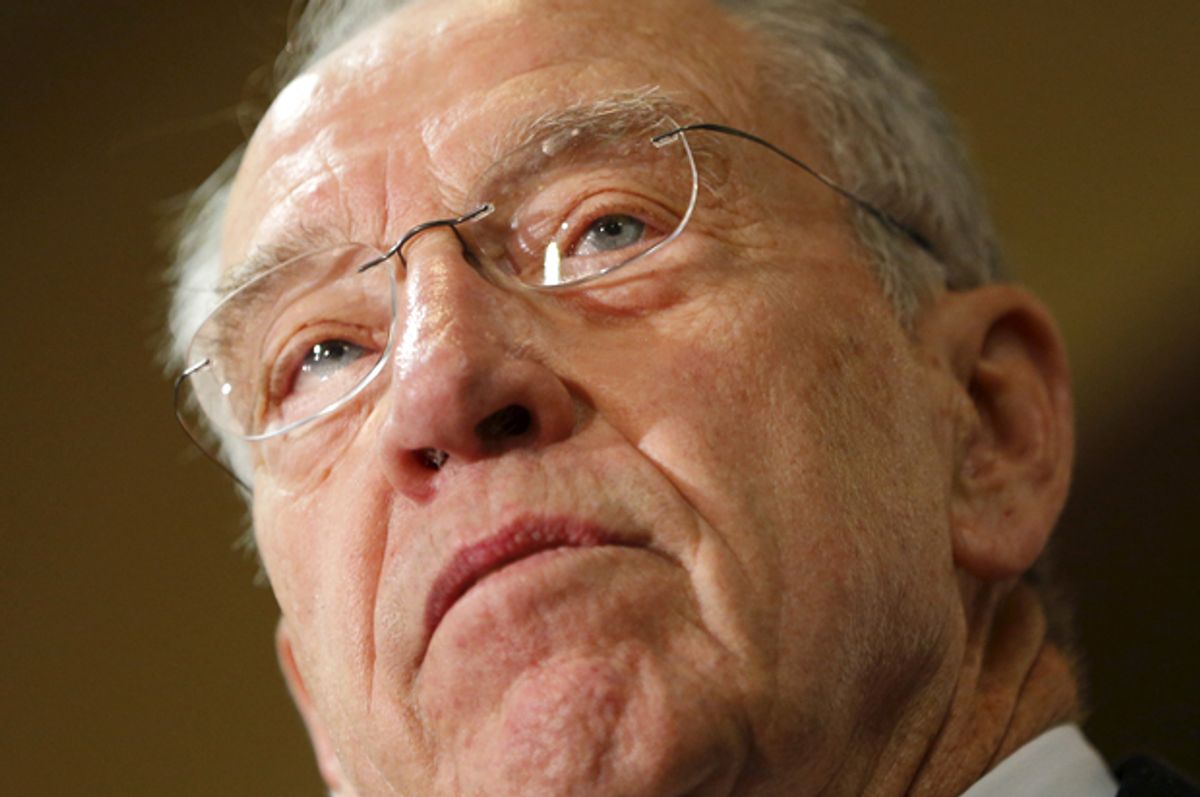 Senator Chuck Grassley has a problem. He feels it is very important for “the people” to have a voice in selecting Antonin Scalia’s replacement on the Supreme Court. But what if some of those people, maybe even a majority, tell him their preference is that he hold hearings on President Obama’s current nominee, Merrick Garland? How can Grassley accommodate that possibility without exposing his stance as being yet one more cynical example of the partisanship and obstructionism with which congressional Republicans have met every Obama initiative for seven years now?

Simple. He’ll avoid talking to the constituents who disagree with him, even if they might be a majority. Problem solved!

Grassley is currently in Iowa during the Senate’s two-week spring recess, with plans to spend a chunk of that time travelling around the state for town halls with his constituents. This is a perfect opportunity for voters to ask him about this new principle on not confirming judges that he suddenly discovered after 35 years in the Senate -- but only if they can find one of those town halls. According to the Huffington Post,

[M]ost of the public will have no idea how to find him, because his office is keeping the details of those events secret to avoid protesters. […]

Grassley spokeswoman Beth Levine told the Omaha World-Herald that the senator’s staff would not be releasing the logistics for those events because they wanted to make sure the attendees’ concerns would be heard.

“Political operatives [from Washington, D.C.] are trying to hijack Sen. Grassley’s meetings with Iowans, and it’s more proof that they care more about politics than giving people a voice,” Levine told the World-Herald.

Ah, the old “outside agitators” gambit, invoked whenever there is a danger a politician might hear something that conflicts with his inviolable position on a subject. That the protestors might actually be Iowans, and therefore voters who will be deciding whether to send Grassley back to Washington this fall for a seventh term in the Senate, cannot be acknowledged.

Levine’s assertion that the senator’s concern with making sure the events are only for hearing “attendees’ concerns” is also hilarious when you consider that the nomination of a new justice is very much an important issue in this election. If anything, Grassley and his Senate colleagues have with their own actions and words highlighted for voters who might otherwise not have cared very much just how important picking a possible swing vote to sit on a narrowly divided Court for the next twenty years truly is.

And if any of them had any doubts, they could take a look at Tuesday’s 4-4 Supreme Court decision in Friedrichs v. California. The tie vote means the lower court’s ruling, an enormous win for the labor movement, stands. Had Scalia still been alive, he would likely have broken the tie in favor of the defense and been an enormous blow to public-sector unions.

Now, having backed himself into a corner, Grassley does not want to take the chance that any of his sixteen scheduled town halls over the next couple of weeks will be sullied by a constituent asking him to defend his actions on this very important issue. Sorry, Iowans! Better stick to making him promise he’s going to keep those sweet ethanol subsidies flowing into your state.

As chairman of the Senate Judiciary Committee, Grassley is in a tougher spot than his colleagues. RINOs like Susan Collins can break with Majority Leader Mitch McConnell and call for hearings for Garland. Grassley, however, had to take the maximalist position from the start, locating and defending a heretofore-unheard-of principle that says a president does not get to nominate a SCOTUS justice when he’s in the last year of his term. It’s a pile of bullshit that could be photographed from space, but the logic of the GOP’s obstructionist tactics dictates that anyone repeating it has to pretend to believe it without ever being called on to defend his position on the likely chance that when questioned, all the justifications won’t stand up to scrutiny.

Then again, Grassley is not exactly a profile in courage when it comes to facing angry constituents. Back in 2009, he was part of the “Gang of Six” working to craft a bipartisan version of what eventually became the Affordable Care Act. During the August recess that year, he held a series of town halls around Iowa, at which the ACA was obviously going to be the big topic. Other members of Congress that summer were seeing their own town halls interrupted by angry wingnuts screeching their opposition to the legislation. Grassley initially had defended working on the legislation by telling the public it would be irresponsible for the Republican Party to not at least talk about what was wrong with the health care system and see if that talk could lead to solutions. But after seeing the anger Obamacare stoked that year (and coincidentally, with another re-election campaign coming up), he changed his tune.

So instead of defending his own work, Grassley short-circuited potential protestors by abandoning the “end of life” provisions that were in his bill and demagoguing about “death panels” to his audiences. That got him cheers, even if he looked like an idiot to rational humans. (To be fair, rational humans were in short supply in the GOP in 2009, and the situation hasn’t improved.)

This time around, Grassley isn’t even going to bother addressing the issue if he can help it. He’s just going to stack his appearances with people who are less likely to even ask the questions or tell him anything other than how much they approve of his SCOTUS shenanigans. It would be pathetic if it wasn’t already so predictable.