Even our burgers are angry now: Burger King's "Angriest Whopper" is "Make America Great Again" on a bun

Take that, juice cleanses! This fast-food monster is banking on election-year anger ruling our stomachs, too 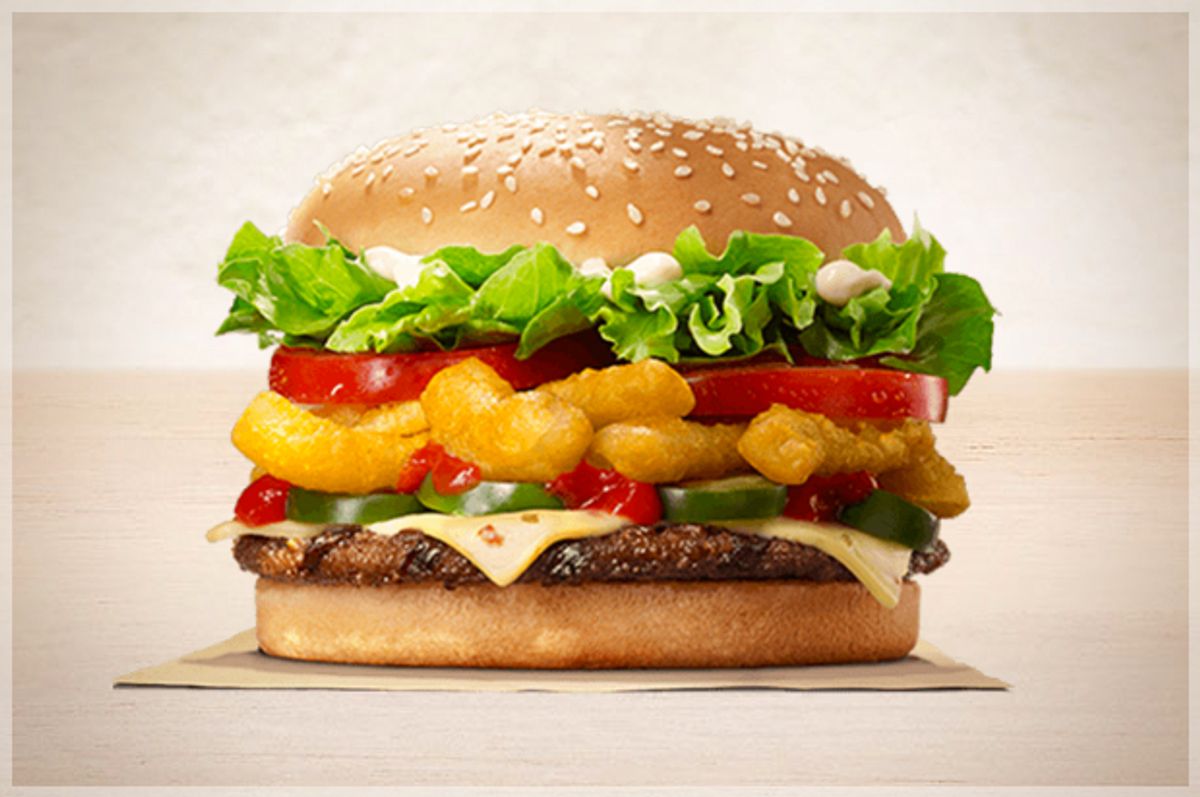 If you could distill the feeling of "Make America Great Again" into what we loosely call "food" form, it would no doubt look just like a combination of fury and saturated fat. Guess what? It's here, in the form of something Burger King calls The Angriest Whopper.

The announcement of the limited-run new delicacy, which the fast food chain is debuting Thursday, promises a new Whopper, "angrier than ever." Rootin' tootin' it is! Pew! Pew pew pew! A follow up to the popular Angry Whopper, this concoction features a patty topped with bacon, American cheese, lettuce, tomato, "crispy" onions, jalapenos, mayonnaise and "spicy angry sauce," as well as a bun as bright as Donald Trump's face, with the hot sauce baked in. I got colitis just looking at a picture of it.

The rageaholic Whopper is indeed a formidable piece of work. It clocks in at 790 calories, or about a third of an adult male's recommended daily intake.  It's got 1,500 milligrams of salt, which is about 2/3 of the recommended daily maximum. Then there's the fat — 48 grams — about how much as most as you should consume per day. Oh, and as a bonus for a savory dish, it's got nearly three teaspoons of sugar. Add some fries, a soda and what the hell, a vanilla soft serve, and I'm confident it could finish off Ron Swanson himself.

Why would Burger King wreak havoc with God and nature and create such a monster? A representative from the company said in a statement, "The black bun of our A.1. Halloween Whopper created a lot of conversation, and our previous limited time Angry Whopper sandwich was a hit with guests. So, we're combining the power of these past hits into a star-studded sandwich we think our guests will unanimously agree is the next must-eat burger." In our new apoplecic burgerscape, the phrase "must-eat" seems a chilling directive.

In recent years, fast food chains have found themselves in a kind of escalating arms race, rolling out ever more defiantly valve replacement-inducing fare. Kentucky Fried Chicken likely thought it had exercised the nuclear option six years ago when it rolled out its notorious Double Down — a bacon and cheese sandwich in which fried chicken served as the bread. In 2013, Pizza Hut launched an unholy "crazy crust" pizza -- possibly because it had a nicer ring than "criminally insane crust" — featuring five different kinds of cheese. Subway offers a Fritos Chicken Enchilada Melt. And 7-Eleven, perhaps correctly assuming you are out of your mind high right now, can provide you with a cheese loaded Doritos "experience." (Pro tip if you're up for the "experience": Neon orange food burns like hell when it comes back up.)

But the Angriest Whopper gives them all a run for their money. It is the Whopper of talk radio listening indignation, the Whopper that laughs in the face of juice bars popping up on every corner, that scoffs at the notion of clean eating. It is the food that believes Gwyneth Paltrow is a communist. This is the Whopper that believes our founding fathers fought for us to have, a Whopper of destiny, a Whopper that screams into the night, "You couldn't handle this, Europe!" It is full of unbridled indignation. And bacon. Which makes it entirely the most American thing in America right now, and flavor of our time.