The dark side of "visibility": How we slept on trans people becoming the new scapegoats of the right 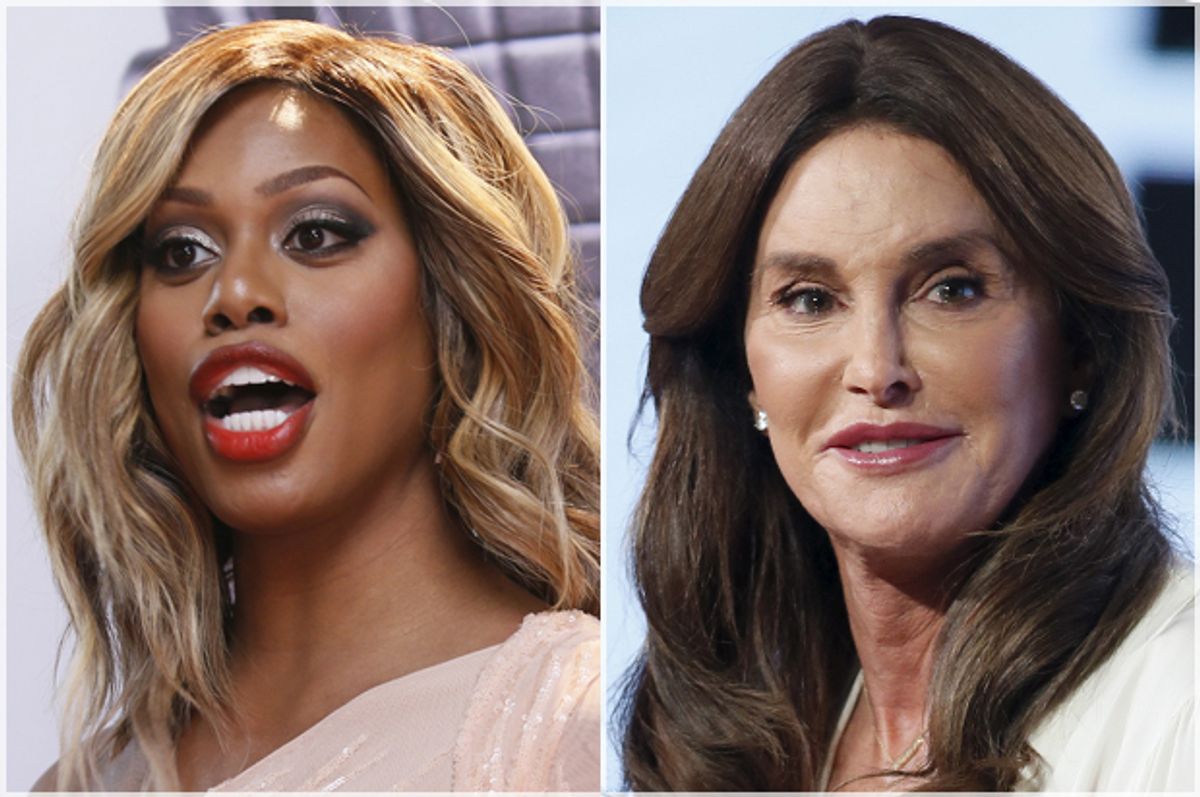 I was happy to hear about the International Trans Day of Visibility two years ago. I agreed with the sentiment that the Transgender Day of Remembrance in November being the only trans holiday was morbid and depressing and that celebrating happy, healthy trans lives was a positive goal. I was happy to be one of many allies pushing awareness of March 31 as a “day of visibility” last year.

Which is why I was surprised when one of my close friends, who is trans and who hadn’t heard of the holiday, responded with a scowl when I told her about it.

“My goal isn’t visibility, my goal is survival,” she said. “The Jews were extremely visible in 1930s Europe, how much good did it do them?”

Since then I’ve been thinking about the relative shallowness of “visibility” as a goal in and of itself, especially since the past two years have been one long performative celebration of trans visibility.

Caitlyn Jenner became a magazine cover girl in the name of “visibility” and has continued to do highly visible things like entering a golf tournament, blogging about her love life, starring in a reality show and speaking out in defense of Ted Cruz. We’ve had a streaming show about trans issues win a Golden Globe, we’ve had a feature film about trans issues nominated for Oscars (winning one for Best Supporting Actress). Ever since Time ran its famous May 2014 cover of Laverne Cox with the optimistic title “The Transgender Tipping Point,” everything’s been looking up for trans people, right?

The progression from visibility to tolerance to acceptance within the LGBT coalition has infamously been uneven between the LGB side and the T side. If one were to try to make a parallel (an extremely imperfect one) with Time’s “Transgender Tipping Point” with Laverne Cox and an earlier moment in queer history, it’d probably be something like Ellen DeGeneres and her character both coming out on Ellen in 1997 (a moment pivotal enough that there’s a website named for it).

Did the dramatic moment of a well known entertainer proudly coming out as gay on TV, with widespread support from the media and the industry, end the oppressive invisibility of gay people? Did it, as Dan Savage put it, get better?

Sure, absolutely, in the long run. But then I tend to agree with Martin Luther King that given a long enough run, yes, things get better--but what happens while we’re waiting for that long run is a much more complicated story.

Ellen coming out on TV came after a run of 1990s media garnering attention and box office dollars out of promoting “visibility” of the gay community to Middle America--whether it be dark, tragic takes on the AIDS crisis or cutesy introductions to the culture of drag and camp. There was a vanguard among the (still mostly straight) cultural elite convinced the “gay tipping point” was coming, after the bloody battles fought by ACT UP in the previous generation and at Stonewall in the generation before that.

Sure, the immediate upshot of Ellen coming out on TV was that her show got canceled and she was exiled from TV for the next few years. But her show was immediately followed by Will and Grace, which made “gay issues” as “visible” on TV as “visible” could be. Surely things were on the road to getting better--liberal allies like me were sure of it, even though I was living in an evangelical Christian subculture where the fire-and-brimstone backlash against the “gay agenda” was getting hotter with every Sunday sermon.

For me the culminating moment of that era was the 2004 presidential election, a political coming of age for my generational cohort. The most enduring image from that election was San Francisco mayor Gavin Newsom’s dramatic gesture of issuing marriage licenses to same-sex couples that February “whether you like it or not.”

Newsom was morally in the right--I and most of my liberal buddies certainly thought so at the time. Time has proven that Newsom was on the right side of history--the American public, today in 2016, overwhelmingly believes Newsom was in the right.

But at the time, all anyone could talk about was the size and the speed of the backlash against Newsom, the wave of same-sex marriage bans that passed on the ballot afterwards, and the widespread fingerpointing on the Left saying the Right unifying around the goal of opposing same-sex marriage is what lost John Kerry the election.

Yeah, the 2000s were a period of progress where things gradually got better for LGBT people, but they were also a time of backlash--where every visible step forward was met with sustained, concentrated and vicious opposition from the Right and mealy-mouthed second-guessing about moving too fast from the Left. I remember vividly how hard and how often LGBT activists were thrown under the bus by liberals after 2004, and can only imagine how frustrating it was to be in their shoes at that time. “Visibility,” in that context, did them no favors.

Is the situation right now with trans people and “bathroom bills” comparable? Well, no, it’s actually a great deal worse.

This year, the RNC specifically outlined turning trans people into a “wedge” issue as a central strategy for the 2016 election. In February, when people were focused on the South Carolina primary, the RNC quietly passed a resolution calling for support for “bathroom bills” refusing public accommodation for trans people and backing the absurdly onerous restriction that in order to be guaranteed the right to use a restroom you must have documentary evidence of your XX or XY chromosome status (read the resolution here). Now, the state of North Carolina has just passed a sweeping law preventing trans people from using the “wrong” restroom in all public spaces, with others following close on its heels.

Trans people didn’t suddenly come into existence in 2016, of course, nor did transphobia in state legislatures. But the last couple years of trans “visibility” certainly paved the way for making trans people into a visible wedge. While the GOP tears itself apart over the Trump phenomenon, transphobia is something the Right can come together on.

The awkward and unpleasant truth is that the gains made from “visibility” for visibility’s sake are fairly narrow and concentrated. As many trans activists have pointed out, the outburst of sympathy for Caitlyn Jenner has mostly been positive for Caitlyn Jenner, who, despite the many obstacles she’s had to overcome in her transition, still remains sheltered enough by her wealth and privilege that she’s oblivious to the war the Republican Party she’s still loyal to is waging on trans people overall. The plaudits given to "Transparent" and "The Danish Girl" are going to show-runners who are not trans writing stories for actors who, in the case of the stars, are not trans to portray--and often doing it in ways real trans people find harmful or insulting.

Meanwhile, the backlash is far more evenly distributed. Jenner herself acknowledged that when her visibility provokes a transphobic backlash it’s not she herself who bears the brunt of it, it’s the much poorer, less influential trans women who have to live around it. Eddie Redmayne gets to take credit for “raising awareness” while the movie itself indulges liberally in tropes of trans women as hypersexual and their partners as victims that make people think the threat of predatory trans women in bathrooms might be justified.

It’s always been dangerous for trans people to use the “wrong” bathroom--a situation fraught with the threat of violence that Caitlyn Jenner is unlikely to experience and that cis actors who get paid to pretend to be trans, like Eddie Redmayne and Jeffrey Tambor, will never experience. But it’s fair to say that right now, with attention focused on the issue due to bathroom bills, the threat level is elevated. In Kansas a law has been proposed to, essentially, force schools to pay a $2,500 bounty to students who discover people using the “wrong” bathrooms and turn them in.

That’s the kind of escalation “visibility” brings you. I put “visibility” in quotes because, well, it’s really a combination of visibility and invisibility--the hostility and the backlash comes from the visibility of celebrated public figures in the media, from the Netflix series and Time magazine covers and Oscar-nominated films conservatives love to complain are being “shoved down their throats.”

But the reason that visibility is pernicious is how quickly we liberal allies stop paying attention once the exciting feel-good moment is over. I love Laverne Cox’s character on "Orange is the New Black"--but I confess my interest in the show as a work of art hasn’t translated into my being aware of the real-life plight of incarcerated trans people as I should be. Caitlyn Jenner, as a wealthy celebrity trans woman, wrestles with her feelings being yelled at by trans activists on TV while the vast majority of trans people in this country who are not Olympic gold medalists or reality TV celebrities struggle to stay employed or, in some cases, to keep a roof over their heads.

And just like the spectacle of liberal allies telling gay activists in the early 2000s they were asking for too much too fast, we have left-wing activist voices--gay-rights activist voices, even--speaking up about trans people taking up too much space in feminism and kicking around the idea of subjecting trans people to conversion therapy for their own good even while saying that the open harassment entailed by bathroom bills is, of course, going too far.

This kind of visibility--trans people being seen as a target, a symbol, a topic of controversy, a good juicy “theme” to make a movie about, without any follow-through when it comes to real-life poiltical support? That’s the worst of both worlds. It’s starting a fight on someone’s behalf, then ducking away once the fight begins in earnest.

I’m personally ashamed that I, like a lot of other people, lost track of the “secondary” issue of bathroom bills and public discrimination against trans citizens while arguing about other things this political season--all while the Republicans were busy making that “secondary” issue into a primary issue to energize their base.

And I’m haunted by the possibility--something I hear from trans friends all the time as a complaint--that consuming works of art about trans characters and boosting trans celebrities and making trans issues “visible” on social media may, in the long run, bend the arc of history toward justice but in the short run is making trans people’s everyday lives harder.

The one-sided kind of visibility we’ve had so far, the kind that enriches our culture and enriches producers’ coffers without really doing anything to engage the backlash it provokes? We’ve had more than enough of that in the past two years.

It’s encouraging to hear that, now that the North Carolina law has hit the news, organizations are fighting back through lawsuits and boycotts. That’s the kind of visibility that we need. Not just asking trans people--or any category of marginalized people--to make themselves visible, and vulnerable, for our edification, but committing to be visible to back them up in return.

This March 31st, that’s the kind of visibility we should celebrate.