The family values sham: Research shows that most of these '90s fears were nonsense

Remember the hand-wringing about working mothers, super-predators, and the rest? Most of them were just fantasy 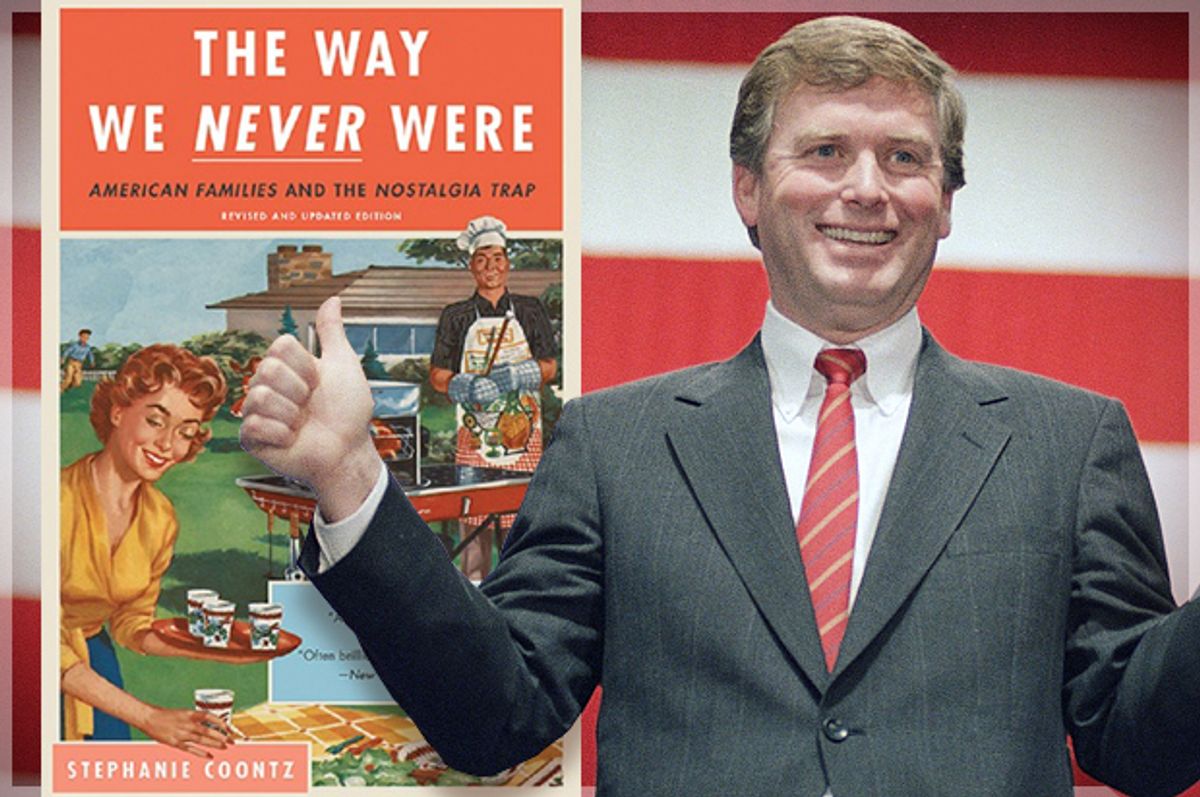 Anyone who recalls the early 1990s will remember the “family values” fight, Dan Quayle’s pontificating, and the “Murphy Brown” wars. The 1992 presidential race provoked a lot of discussion about working women, single mothers, traditional family structures, and other social issues. Quayle, then the vice president, criticized Candace Bergen’s journalist character Murphy Brown, arguing in a speech at the Commonwealth Club of California that she was "mocking the importance of fathers by bearing a child alone." (He also demonized "the cultural elite" in that speech.)

A number of predictions floated around at the time, and more than two decades later, author and scholar Stephanie Coontz has dug into the research to see which of them have come true. She finds some have, some haven’t. But over all, Coontz – author of the influential book “The Way We Never Were: American Families and The Nostalgia Trap” – finds that a lot of conservative fears of that era have not materialized.

Coontz, a professor of history and family studies at the Evergreen State University, had just released a briefing paper for the Council of Contemporary Families, where she is director of research and public education. Some of this has been discussed elsewhere – the sociologist Barry Glassner, in his book “The Culture of Fear,” has debunked some of the supposed crises around crack babies, runaway crime, and young mothers – but it’s all worth seeing.

One of the fears at the ‘90s, for instance, was that as working women landed better jobs, they would have to outsource their parenting to nannies, day-care centers, and the like. “In fact, however, even as mothers’ work hours increased, their child-care hours increased too, while fathers’ child-care time tripled,” Coontz found.

Today, both single and working moms spend more time with their children than married homemaker mothers did back in 1965. And, according to David Cotter, Joan Hermsen, and Paula England’s brief report on Moms and Jobs, educated professionals – the women most likely to work outside the home – spend many more hours in child care than their less-educated counterparts.

She also finds other fears – that children born to unwed mothers would become “super predators,” that children raised by gay parents would be troubled, that educated women would have trouble finding educated men – ended up either sorting out or being groundless. Early research showed that couples who shared housework and childcare had less sex. But that turned out to be true only of people married in the ‘70s and ‘80s (probably Boomers.) For couples married later, it was different: “heterosexual couples who share housework and childcare equally now report the highest levels of marital and sexual satisfaction – and the most frequent sex.”

Finally, there’s the fear that Brad-and-Angelina-style marriages will lead couples to ruin. But the research shows otherwise. Here’s Coontz, who has revised and updated her book, again:

Of course, conservatives had a point: Children are often better off when they are raised with two parents. Kids need stability, and a family should offer that. But the economy that developed during 12 years of Reagan-Bush, with inequality rising, unions fading, industrial jobs closing, a bad Bush recession, left a lot of families, especially working-class American families, struggling. These economic strains change the way families hold together — it’s not just liberal permissiveness or evil messages emitted from the television. And some women have reasons to raise kids on their own; demonizing them does not help anyone.

It’s also worth mentioning that worship of the marketplace destroys actual family value (which is kind of a nice concept if you think about it) faster than, say, a working mother does.

Surely some conservatives were sincere about wanting to protect children. And lots of traditional families work well. But the data on the family values debate, two and half decades later, shows that what it was mostly about was rhetorically beating up on liberals, women, and black people.