Thomas the Tank Engine, neocolonial fantasy: What his new international pals, and the backlash against them, signal

Freak-outs over new trains from India, China and Brazil reveals anxieties about immigration and global market 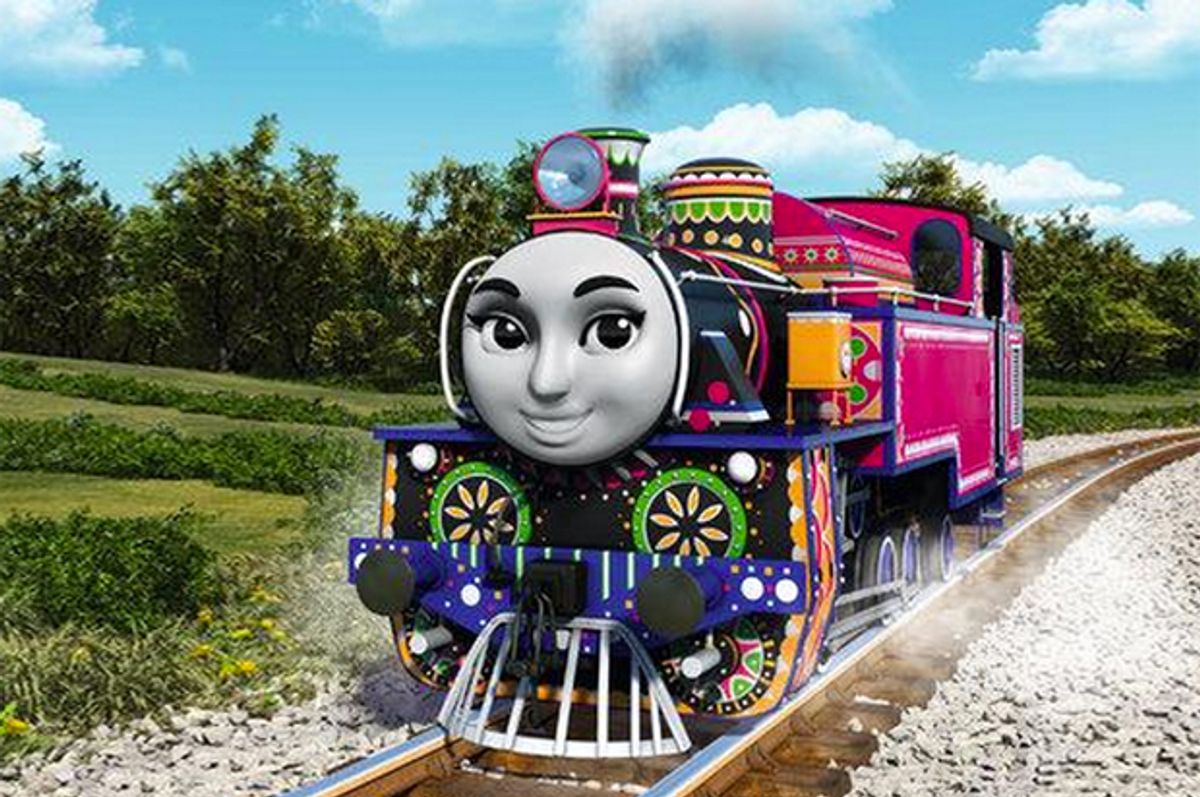 Ashima of India, in "Thomas the Tank Engine" (Mattel)
--

As a young child, I never much cared for Thomas the Tank Engine, who struck me as creepy and coercive (though I believe the word I used at the time was “yucky.”) The book I adored was “The Three Horses: Blackie, Brownie, and Whitey,” a “really bizarre” book that continues to inspire nostalgic devotion for its fascinating illustrations and unapologetic weirdness. It’s the story of three ponies who pass as princesses by wearing big-eyed, white-girl masks. By standing on their hind legs, they literally prance around in fancy dresses, their odd gaits waived away as an aristocratic affectation.

Now that I am older, it’s obvious why that book fascinated me. It was an inquiry into race, performance, and whiteness as a normative social construct. The three horses were basically Jonathan Swift’s Houyhnhnms in drag, these being a race of rational beings described in "Gulliver's Travels" that physically resemble horses but are superior to human “yahoos.” Our three horses attempt to humanize themselves as an exercise in reverse Utopianism, violently denying their true natures in exchange for…something. They didn’t actually know. They just knew they were supposed to want to be princesses. In the end, the dresses came off, so did the masks, and the naked horses returned to their free, frolicking, and ineffably colored selves. The book’s message was clear: it’s easy to fool others, but what really matters is how you feel about yourself. Naturally, hardly anyone has heard of “The Three Horses,” because its message is not only subversive, there’s a homoerotic subtext. Hence “weird.”

By contrast, Thomas the Tank Engine isn’t just about a train engine with a moon face who gets in and out of trouble with a heavy helping of elbow grease and good cheer. As Stuart Heritage writes in a hilarious piece for The Guardian, everybody knows that Thomas the Tank Engine “is the story of several straight white men who solemnly obey the every passing whim of a white, straight, male dictator [Thomas] in a crude reinforcement of the belief that the working class should know its place.” Precisely because the talking train imparts Progressivist faith in technology achieved via willing obedience to its goals, Thomas the Tank Engine has become a cash cow: he's the keystone of a moneymaking empire that brings in a billion dollars in annual revenue composed of television shows, merchandise tie-ins, and now a straight-to-DVD film called “The Great Race.”

Enter controversy. Over what? The fact that Thomas holds out systemic whiteness as a positive social good while reinforcing the message that mass industrialization is the key to prosperity? Or that the working classes should labor for free out of sheer delight to be contributing to society? No, these things are the bedrock of civilization and should forevermore remain jellied in cultural aspic. The trouble is that the film (and its subsequent tie-ins) will be giving Thomas fourteen new friends from other countries, four of which are also female, presenting cringing parents with the spectacle of boy trains rolling with girl trains with names like “Ashima.”

Mattel made it plain that the girl trains “would not be a romantic love-interest for Thomas as a love-plot wouldn’t suit their demographic audience,” i.e. toddlers and young grade-schoolers. Whew! But that probably won’t stop anguished think pieces along the lines that Heritage dreamed up, including: “Why must I expose my children to all these sexy trains?” Lest Americans forget, Thomas the Tank Engine is British, wherefore the announcement of Thomas’s new foreign friends made readers of The Daily Mail lose their minds. “I think I’m going to be sick,” one commentator wrote. (Subtext: keep your bloody hands off my childhood!) I sympathize, but it’s adapt or die in the social-Darwinian struggle for survival in the vicious business of toys. Change is difficult, especially when the change forces a revision of misty memories, but the fascinating vitriol in response to the “diversification” of Thomas’ world reveals deeper issues are at stake.

In Britain, at least, it poses an existential threat to Queen and Country, wherein the introduction of new trains such as Carlos from Mexico, Yong Bao from China, and Raul from Brazil, do not brightly reflect the realities of a globalized marketplace so much as suggest that yet another cultural battleground has been ceded to Daily Mail commenters' fear of “illegals,” who are poised to steal your jobs and corrupt the children with their foreign ways. Yet the crucial detail about Thomas’s new “foreign” friends is that these trains are all wearing masks, each face ghostly white despite being “Indian,” “Brazilian,” Mexican,” or “Chinese.” Under the bourgeois aegis of globalization, Thomas’ expanded universe is fostering the assimilation of the rest of the world into structural whiteness, and the new “friends” are facilitators of the neocolonialist marketplace. The century-old series’ original message of Civilization through Industrialization remains intact.

So Thomas the Tank Engine will chug along, making fistfuls of money by adding more iron horses to the line, expanding a commercial empire that, two centuries ago, created modern time because railways had to be synchronized. I still prefer the story of the three horses, fast evaporating into oblivion because out of step, too slow, definitely strange because even black and brown bodies were worthwhile just as themselves. So weird.