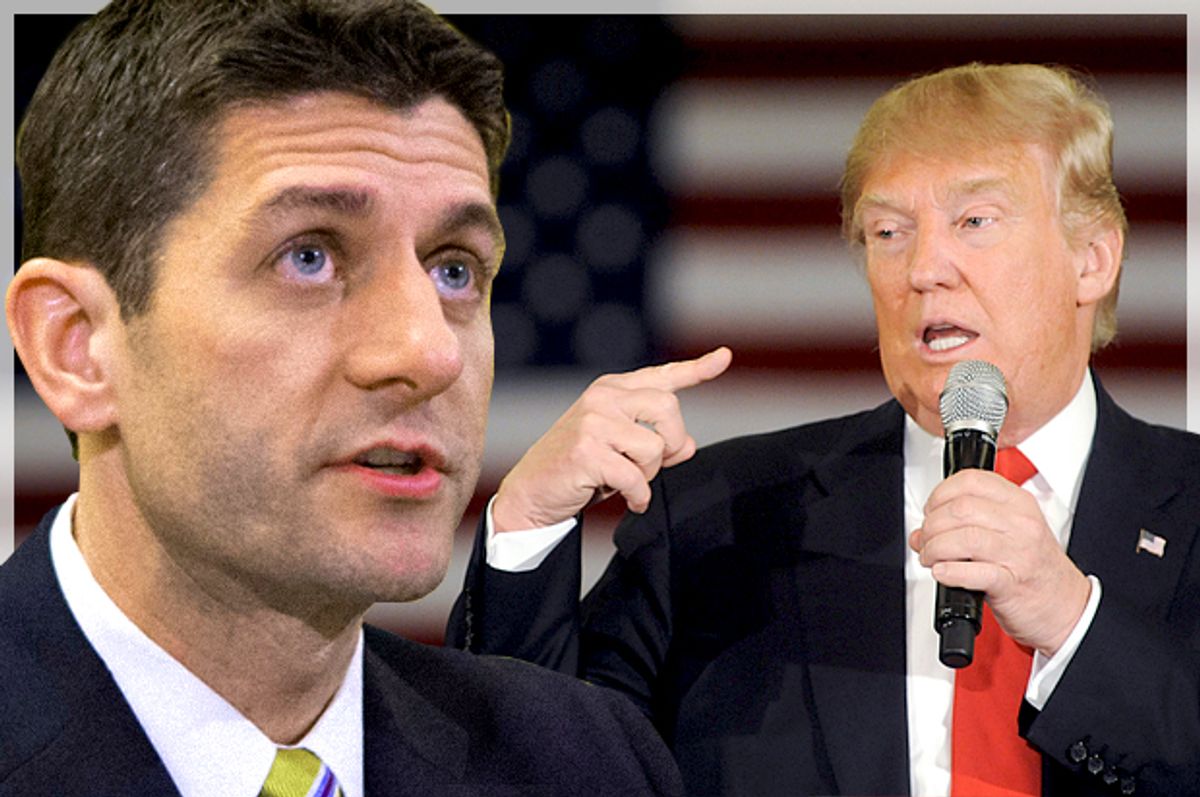 One of the most fascinating things about Donald Trump as a presidential candidate is how he effortlessly and effectively rips holes in the Republican policy agenda despite a) not really having a policy agenda of his own, and b) not really knowing what he’s talking about at any given time.

There are a wealth of examples of this phenomenon, with healthcare standing out as one of the most prominent. At a recent debate, Trump got cornered by Ted Cruz for not really understanding how the healthcare system works, and Trump insisted that under his plan insurance will be private but the government “will not allow people to die on the sidewalks and the streets of our country.” That’s when Cruz, a hardcore conservative who rejects the idea of government involvement in healthcare, jumped in and demanded to know who would be paying to prevent the sick and indigent from dying on the roads. Cruz thought he was scoring points by exposing Trump as a traitor to the conservative healthcare reform agenda, but instead he came off as the guy who opposes having the government help people who are poor and dying.

But perhaps the most significant area of disagreement between Trump and mainstream Republican thought is Social Security. On entitlements generally, the Republican position is to cut, privatize, and in every other way possible reduce the government’s role in these programs. And as it just so happens, the one Republican in Congress who has led the fight in slashing entitlements, Paul Ryan, is now the man in charge of the House of Representatives. Ryan’s famous budget blueprints have prescribed deep and painful cuts to Social Security, and Ryan himself has been an advocate of privatizing Social Security. He more than anyone has crystallized the conservative position on entitlements.

It also just so happens that Ryan’s home state of Wisconsin is the site of the next big Republican presidential primary, which is why Donald Trump phoned in to WROK radio in Rockville, Illinois (just over the Wisconsin border from Ryan’s home town of Janesville) to talk politics this week. When asked about entitlements, Trump said flatly that Ryan and pretty much the rest of the party are dead wrong:

Well, Paul, who I like a lot, he called me last week, I think he’s a really nice guy. But I disagree with him on this. You know, Paul wants to knock out Social Security, knock it down, way down. He wants to knock Medicare way down. And, frankly – well, two things. Number one, you’re going to lose the election if you’re going to do that. That’s going to be easy. I was watching Bernie and Hillary debating, and they can’t give enough on that. So you’re going to lose the election. So that’s not the purpose of it. We have to do what is right, but you will lose the election if you do that. But more importantly, in a sense, I want to keep it. These people have been making their payments for their whole lives. I want to keep Social Security intact. Now, I want to get rid of waste, fraud, and abuse. I want to do a lot of things to it that are going to make it much better, actually. But I’m not going to cut it, and I’m not going to raise ages, and I’m not going to do all of the things that they want to do. But they want to really cut it, and they want to cut it very substantially, the Republicans, and I’m not going to do that.

Much of this answer could have been given by Bernie Sanders or Hillary Clinton, which is remarkable given that it’s coming from the Republican presidential frontrunner. But here’s the thing: Trump is right, at least on the politics of it. The policy he advocates out is vague and impossible to judge on the merits since it begins and ends with “do things that will make Social Security better.” But he’s spot-on when he says that a Republican who pushes for the Paul Ryan vision of slashing and privatizing Social Security is in for a political shitstorm.

We know this is true because of what happened to George W. Bush and the Republican congressional majority when they tried to do exactly that in 2005. They ran into a wall of resistance from Democrats and influential political groups like the AARP, and Republicans were unable to maintain unity as support for the plan cratered. Bush took a beating in public opinion polls and the initiative was dropped.

But really we don’t even need to go that far back in history. Entitlements and Social Security were a big issue in the 2012 election, when Paul Ryan was on the Republican ticket. He and Mitt Romney caught all kinds of hell over Ryan’s past support of privatization and his 2010 budget plan that called for reducing benefits and raising the retirement age. Ryan, when he became Romney’s running mate, refused to answer questions about his past positions on Social Security, but the issue came to a head at the vice presidential debate, where Joe Biden blasted Ryan for his support of privatization. When asked by moderator Martha Raddatz about the 2005 privatization push, Ryan defended it but then had to clarify: “That's not what Mitt Romney's proposing.”

Don’t get me wrong: I have no idea how Trump would handle Social Security, and I don’t think he really understands too much about how the program works. Even still, with all his ignorance and incoherence, he still manages to slice through his own party’s political arguments and expose their biggest weaknesses. Seeing it happen makes you think that they couldn’t have been that strong to begin with.