How not to write about race: TV anchor fired after stunningly insensitive post about "young black men" with "multiple siblings from multiple fathers"

Wendy Bell's post about a shooting was, in the words of writer Damon Young, a "white privilege turducken" 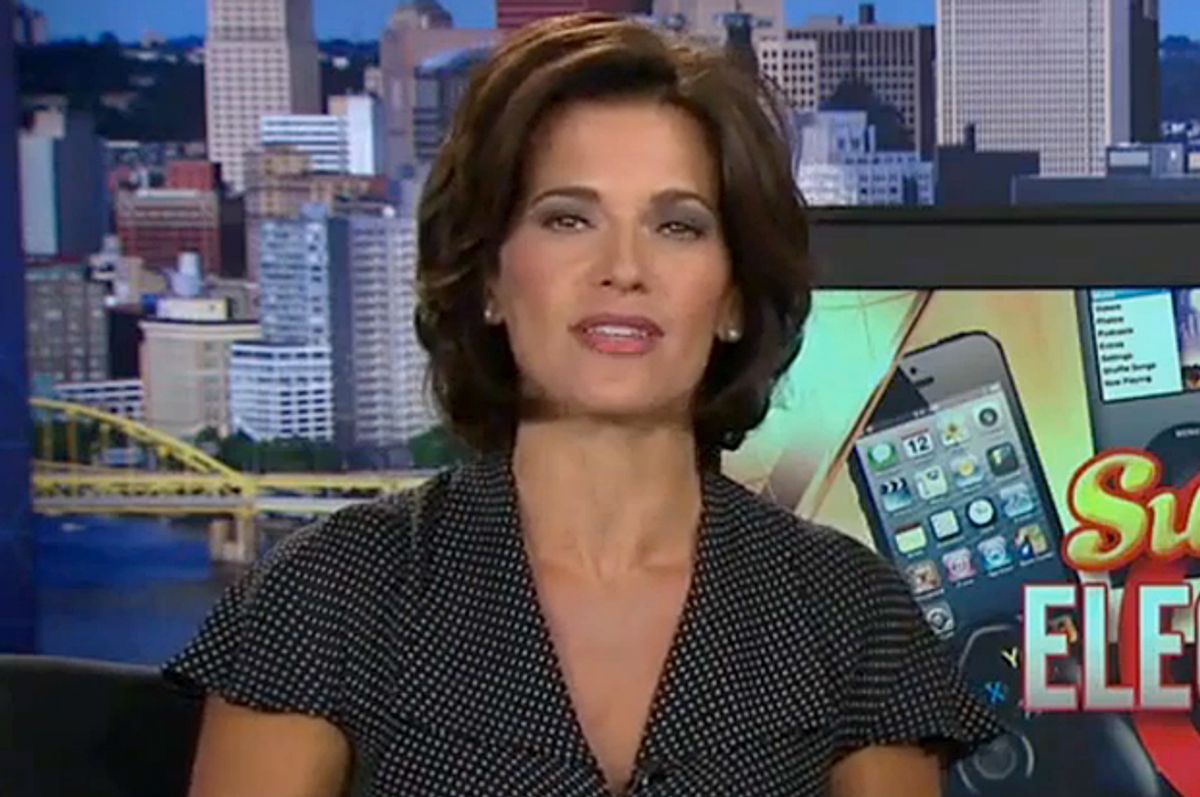 Wendy Bell probably thought she meant well. She probably thought she was being insightful, sensitive, concerned, even. So it must have come as quite a surprise to the veteran Pittsburgh journalist when she instead lost her job for publishing offensively sweeping racial generalizations on social media.

The 21-time regional Emmy Award winning WTAE-TV anchor and reporter took to Facebook earlier this month to air her thoughts on a mass shooting during a family cookout in Wilkinsburg that left five adults — including an eight-months pregnant woman, along with her baby— dead. Police have made no arrests, though last week one man was questioned in connection with the tragedy.

But Bell thinks she had a pretty clear idea about the perps. She wrote on Facebook that "I’ve really had nothing nice to say these past 11 days and so this page has been quiet. There’s no nice words to write when a coward holding an AK-47 hoses down a family and their friends sharing laughs and a mild evening on a back porch."

She went on to observe, "You needn’t be a criminal profiler to draw a mental sketch of the killers who broke so many hearts two weeks ago Wednesday. I will tell you they live within 5 miles of Franklin Avenue and Ardmore Boulevard and have been hiding out since in a home likely much closer to that backyard patio than anyone thinks. They are young black men, likely teens or in their early 20s. They have multiple siblings from multiple fathers and their mothers work multiple jobs. These boys have been in the system before. They’ve grown up there. They know the police. They’ve been arrested. They’ve made the circuit and nothing has scared them enough. Now they are lost. Once you kill a neighbor’s three children, two nieces and her unborn grandson, there’s no coming back. There’s nothing nice to say about that."

Nope, nothing nice about that. But it sounds like she has the case sewn up!

She then shared a contrasting story of an African American teen she spotted "hustling like nobody’s business" in a Southside Works restaurant. She said that she'd praised him to his manager, adding, "I wonder how long it had been since someone told him he was special."

She later edited the post, then removed it entirely. But the damage was already done, and by Wednesday her Facebook page had been deleted, her profile on the WTAE-TV site was gone, and Hearst Television had issued a statement that “WTAE has ended its relationship with anchor Wendy Bell. Wendy’s recent comments on a WTAE Facebook page were inconsistent with the company’s ethics and journalistic standards."

An apologetic tweet from Bell dated a week ago still stands, but her social media has clearly gone dark — her Twitter profile still identifies her as a "WTAE News Anchor/Reporter. Wife and Happy Mother of 5." On Wednesday, she told the Associated Press that her remarks were "insensitive and could be viewed as racist" but said she hadn't been given a "fair shake," and that "It makes me sick. What matters is what’s going on in America, and it is the death of black people in this country. I live next to three war-torn communities in the city of Pittsburgh, that I love dearly. My stories, they struck a nerve. They touched people, but it’s not enough. More needs to be done. The problem needs to be addressed." Yeah, but not like this.

Writing in Very Smart Brothas last week, Damon Young summed it when he said that "I do not wish for Bell to be fired" but astutely noted that "There are so many layers and layers and layers to Bell’s abject obliviousness to how racist this is; all made clear by the fact that she thought it was fine to print it. She’s practically a White privilege lasagna caught in the throat of a White privilege turducken."

Like Young, I'm not really interested in people losing their jobs. But Bell's condescending and spectacularly tone deaf post was a festival of snap judgments — about the murderers with their "multiple siblings from multiple fathers" and THE SYSTEM that made them that way, and about the nice, hardworking black man who "moved like a dancer with a satisfied smile on his face" that she bestowed the blessing of her praise upon, a gift she assumed was a novelty. Bell says her comments "could be viewed as racist," as if the fact that she also expressed sympathy for the shooting victims, or praised an African-American restaurant worker for somehow achieving the feat of doing his job cheerfully, means they weren't. They were. If she'd been paying even a little more attention to "what’s going on in America," Bell might have noticed that white people deciding, based on literally nothing, what they know about black people has a history of leading to tragedy. And not for white people.