Trump said that women who get abortions should be "punished" if it becomes illegal. In reality, they already are 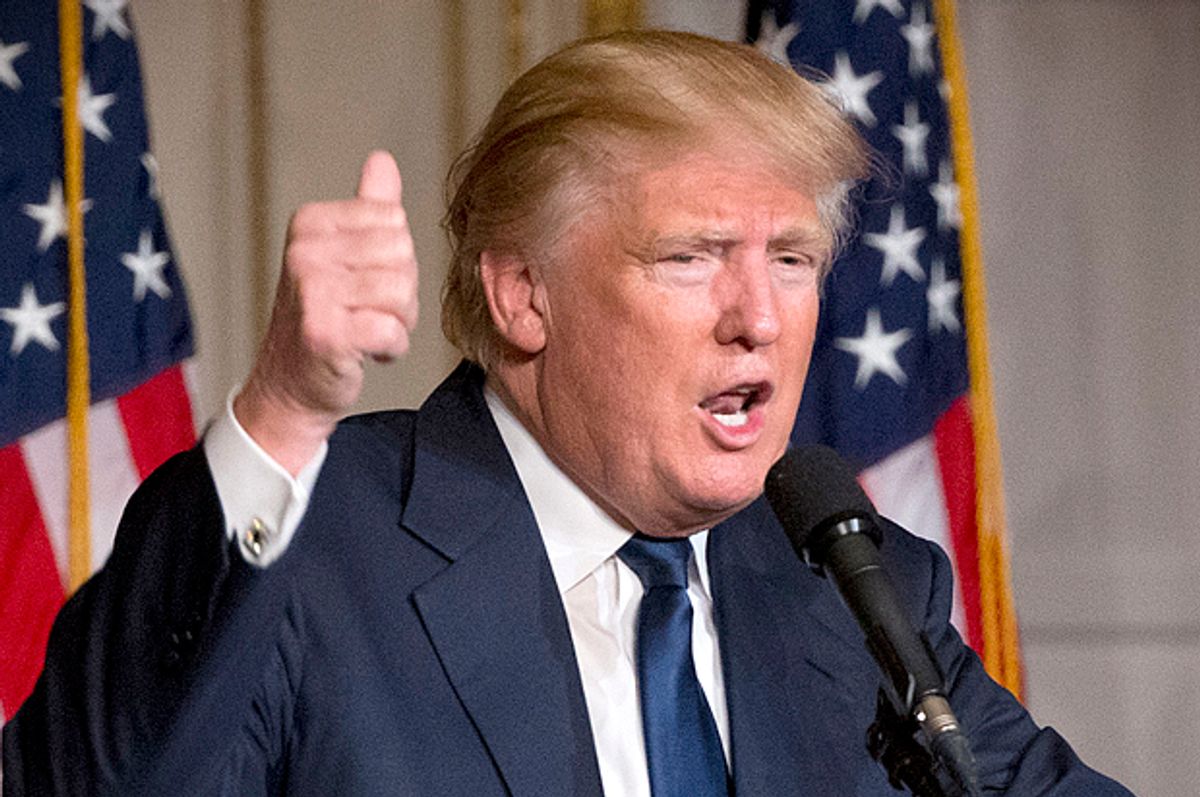 After last night, we can add abortion politics to the long list of issues Donald Trump knows less about than a politically aware 12 year old. On an MSNBC town hall, Chris Matthews asked Trump one of the tougher questions a "pro-life" politician has ever had to face. He asked him if a woman who has an abortion should be punished. And Trump said yes, provoking an outcry from just about everyone on all sides of the debate. It's obvious why decent people would be appalled. But Trump was probably surprised that his anti-abortion allies didn't see it his way.

This question is always tricky for those who hold anti-abortion views. After all, it makes little sense to believe abortion is murder and fail to hold the person who makes the decision to commit the murder accountable for it. In that regard (and in a big break from normal practice), Trump is the one being rational. As Salon's Amanda Marcotte pointed out yesterday:

[T]he official stance that Republicans are supposed to take is that women are victims of abortion and therefore cannot be held responsible for it. Yes, it’s true that women pick up the phone, make the appointment, talk through their decisions with medical professionals, sign paperwork and then either take a pill or let the doctor perform an abortion, but none of this should be taken, in conservative eyes, as evidence that women are the people responsible for the abortion happening. Women are regarded by conservatives as fundamentally incapable of making grown-up decisions. If they choose abortion (and by implication, if they choose sex), it’s because they poor dears were misled.

Yes, the same people that conservatives treat as literally too stupid to understand what making a medical decision entails are then expected to raise children.

The party line is that abortion is murder but the woman who solicits it is not guilty by reason of insanity or mental defect. Keep in mind that one third of American women have an abortion at some point in their lives. That's a whole lot of defective crazy ladies we're allowing to roam free in society.

After it was pointed out that Trump had screwed the pooch, he issued a rare written "clarification" much like the one he was forced to release when he said the military would follow his order to commit war crimes. (These are the only two times he's done this.) Sounding as if it was a forced confession dictated to a prisoner of war, the statement said:

If Congress were to pass legislation making abortion illegal and the federal courts upheld this legislation, or any state were permitted to ban abortion under state and federal law, the doctor or any other person performing this illegal act upon a woman would be held legally responsible, not the woman. The woman is a victim in this case as is the life in her womb. My position has not changed - like Ronald Reagan, I am pro-life with exceptions.

Actually Reagan, after having signed a liberal abortion bill as Governor of California in the 1960s, ran for president on a "pro-life" platform that only provided an exception -- for the life of the mother. And while he didn't make it the crusade of his presidency, he also didn't hesitate to reiterate that stance while in office. This famous passage from his 1988 State of the Union speech is often thrown up as an example of brilliant anti-choice oratory:

Let us unite as a nation and protect the unborn with legislation that would stop all Federal funding for abortion and with a human life amendment making, of course, an exception where the unborn child threatens the life of the mother. Our Judeo-Christian tradition recognizes the right of taking a life in self-defense. But with that one exception, let us look to those others in our land who cry out for children to adopt.

You'll note that he only mentioned the one exception for the life of the mother. And that exception is under fire as well from the farthest fringes of the anti-choice movement which has begun to discuss the idea openly that a woman should die rather than abort a fetus. The 2011 Congress even passed a "let women die" conscience clause for doctors and hospitals:

[T]he GOP-led House of Representatives, with the blessings and encouragement of the United States Conference of Catholic Bishops and extremist religious groups such as the Family Research Council, passed a bill in a vote of 251 to 172 that would, among other things, allow doctors and hospitals to "exercise their conscience" by letting pregnant women facing emergency medical conditions die.

Luckily the Senate let the bill die instead. But this idea is gaining currency among zealots who are canonizing women who choose their fetus over their own lives. (This is obviously their choice and they have a perfect right to make it but the sanctimony with which these "pro-lifers" celebrate the woman's death makes it starkly clear that they believe it is the only truly moral choice.) This concept remains on the fringes for now, but the other exceptions for rape and incest, which have always been mainstream even among conservatives, are increasingly being abandoned.

Neither Rick Perry nor Marco Rubio endorsed those exceptions in their presidential campaigns, arguing that "every life is precious." And back in 2012, even amidst the furor over Missouri candidate Todd Akin's controversy in which he bizarrely stated that women can't get pregnant from a "legitimate rape," the platform committee at the RNC called for a ban on abortion, with no exceptions, not even the life of the mother. Just to make it truly antediluvian, they also called for a ban on emergency contraception, apparently believing that if any female did happen to find herself in circumstances one might define as a "legitimate rape," she should also be denied the possibility of preventing a pregnancy from resulting in the first place.

So, despite Trump's accidental foray into logical thinking, in which he correctly surmised that if abortion is illegal, it makes no sense not to hold the primary perpetrator legally liable, his lawyerly walk-back places him among the less radical of pro-life candidates. He apparently does not believe women should die rather than have an abortion and he has said in the past there should be exceptions for rape and incest. So, if Trump were president he would not force girls to give birth to their own siblings, something which is rapidly becoming a rare act of compassion among "pro-life" politicians.

And while it's certainly positive that he's also no longer looking for a proper "punishment" for women who have abortions, as Marcotte points out, much of anti-abortion activism and the current wave of anti-choice legislation does punish women for having abortions. The practical effects of the rabid protests, the fear mongering, the onerous regulations, the closing of clinics and the defunding of vital services is to make the lives of unintentionally pregnant women who do not wish to bear a child unbearably miserable. Sadistic activists will go to any lengths to terrify young women, even running vicious scams to convince them they are in legal jeopardy if they go through with an abortion. Authorities around the country are arresting and jailing women for having illegal self-induced abortions, as bizarre as that sounds. These days people take their lives into their hands to even accompany a friend to a clinic if some "pro-life" terrorist decides that is where he's going to carry out his deadly crusade.

So Trump's original position isn't really all that radical. Women are punished every day for having abortions. Indeed, a fundamental belief among many anti-choice radicals is that pregnancy and childbirth themselves are penances women must pay for their sexuality.  ("No get out jail free card for you, young lady.") Trump, being unschooled in the ways of the conservative movement, foolishly assumed that you'd have to change the law before you could inflict the punishment.