Between Gmail's mic drop, unease over the election and China's autocratic policy, it's feeling like a grim one 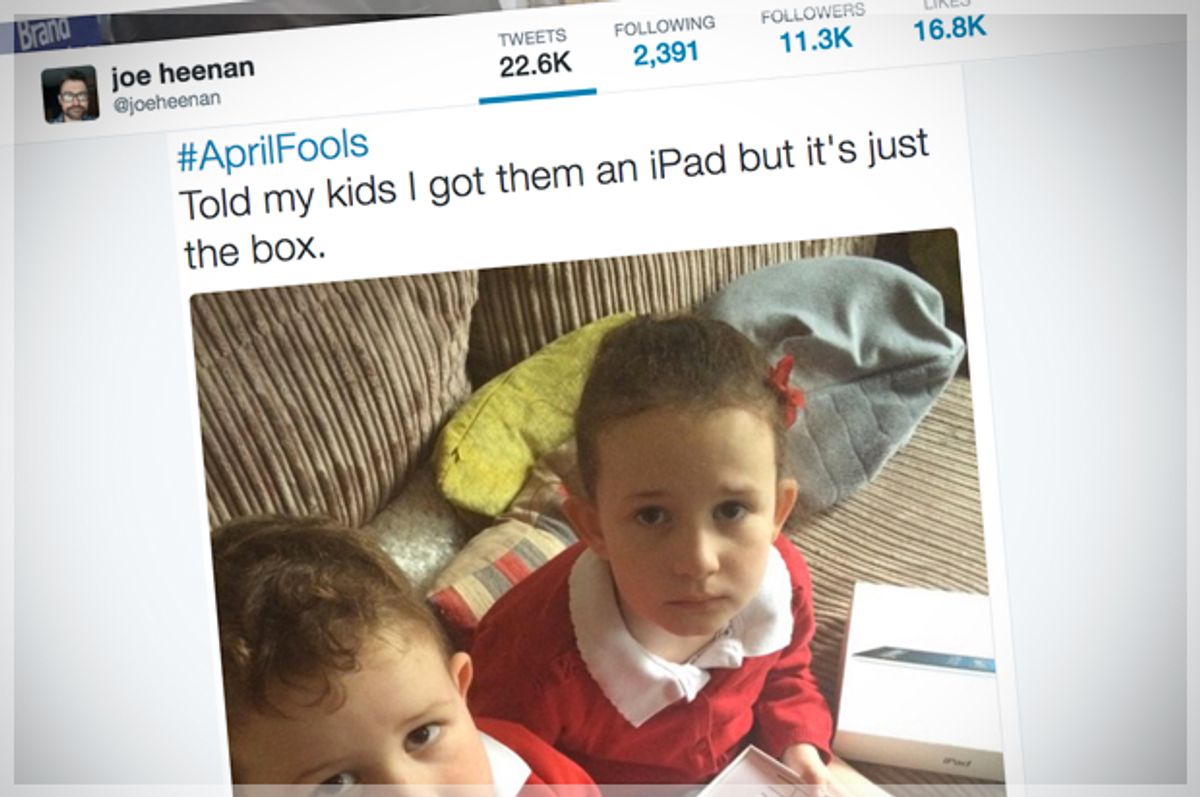 One thing you can be sure is true today is that it’s April Fool’s Day. That may be the only thing, though, that any of us can know for sure today. And the tension between what’s real and what’s not real – what we can trust without inviting at least a minor humiliation – is making some people uneasy. April Fool’s can be a relatively innocent spring holiday based on a shared sense of absurdity. But it can also get mean, grim, and weird. That’s where it seems to going this year, especially online.

Maybe the most consequential of all of this is Gmail’s “mic drop.” Meant to be a cool hip hop reference that would end an online conversation with a wink and some attitude, the plan went terribly wrong. “When users were sick of getting replies from a group email thread,” Time reports, “they could hit a new send button that would send a GIF of a yellow Minion dropping a microphone, and then would not receive any other messages from the thread.” Sounds funny, right?

Users took to Google’s product forums to say that accidentally hitting the Mic Drop button had insulted coworkers and even prevented people from getting new jobs.

“I have been interviewing with this company for 3 months now and mistakenly sent the email directly to guess who? The HR!” one user wrote.

That person wasn’t the only one to accidentally “mic drop” on professional correspondence. “Accidentally hit this new “mic drop” button halfway through composing a professional email,” someone else wrote. “Dying to remove this thing.”

And then there's the not-terribly-good-natured prank by the father who posted a picture of his kids opening a box for what they thought was an iPad to find… an empty box. And then he tweeted the picture, just to rub it in. "They both got a chocolate egg for being good sports,” he told BBC News. “But some people without a sense of humour have started to bombard me with hate messages."

I’m not sure who to feel more sorry for here – the sad-faced kids or the father who is now being publicly assailed for temporarily breaking their hearts.

There are also people on Twitter who dislike the whole thing. April Reign, the editor and creator of #OscarsSoWhite, sent this out.

(It’s hard not to agree: For a journalist, the fact that there’s even more misinformation than usual floating around today is enough to make you turn the computer off entirely.)

There’s a whole subset of jokes connecting the rise of Donald Trump to April Fools’ Day, with slight variations:

These have gotten so plentiful already that television writer/producer David Simon posted this:

Perhaps the darkest news associated with April Fools’ Day is that China has outright banned it. The Washington Post reports:

The ancient tradition of hoaxing and playing practical jokes on the first day of April has fallen victim to China’s crackdown. Like democracy and free speech, it is a Western concept that simply isn’t welcome here.

So why has April Fools’ turned into such a bad dream this year? It’s no secret that the world is in turmoil, and that the presidential race has been scarier than usual. Social media not only shows us the bad news, it helps us spread it around. April Fools’ may have begun in Europe as part of wacky, chaotic spring festivals -- what anthropologists call renewal festivals -- that signals rebirth. If so, its tone – at least for some people – has changed considerably.