Joy is a feminist (comedy) act: With her playful, dirty swagger, "Broad City"’s Ilana is breaking the mold

We're living in a boom time of feminist comedy, but only Ilana makes being a young woman in America look this fun 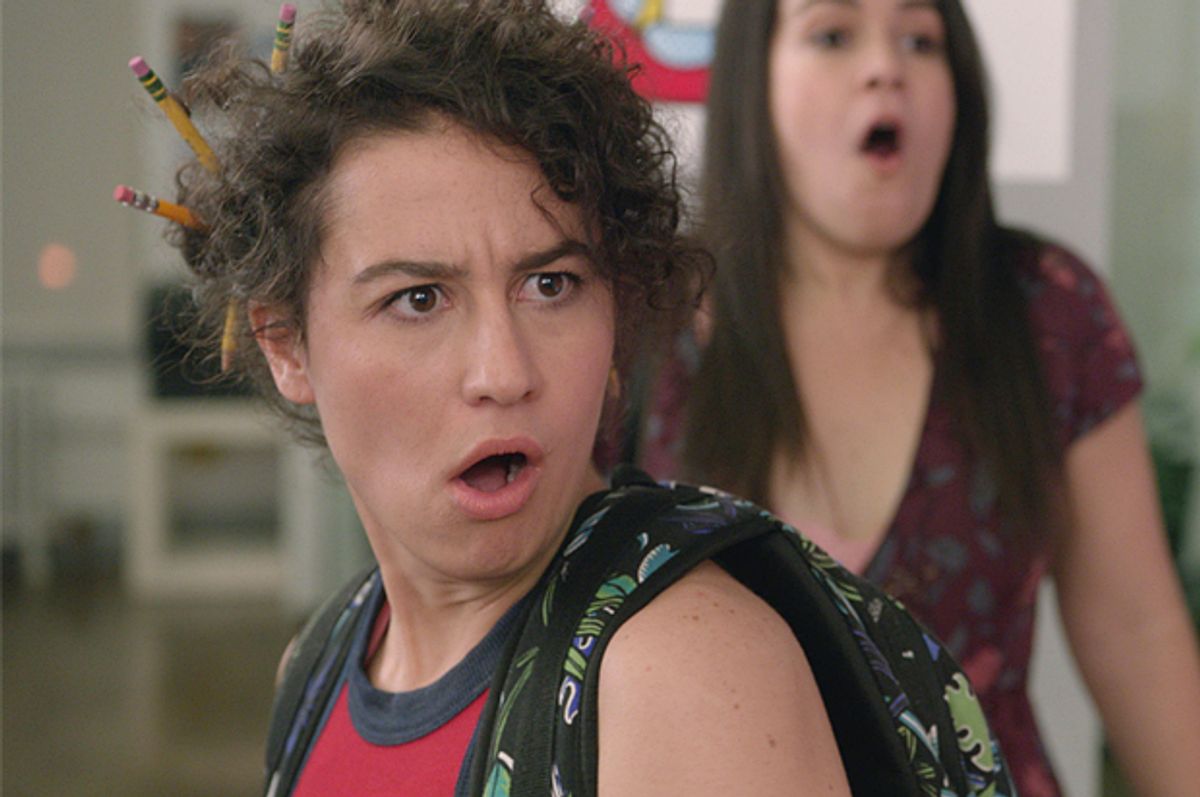 In her now famous skit, “12 Angry Men Inside Amy Schumer,” Schumer spoofs the iconic film “12 Angry Men” by depicting a jury of 12, whose job is to decide whether she is attractive enough to be on T.V. “It’s an undisputed fact that a woman’s value is mostly determined by her looks,” one man says, the others concurring seriously.

Since "Inside Amy Schumer" debuted on Comedy Central in 2013, Schumer has consistently lampooned sexism in American culture, from the way that the military treats sexual assault, to the ways that Hollywood reduces women to sex objects. Her increasingly political skits have ushered in an era where it’s simply become impossible to argue that feminists of the world lack a sense of humor; indeed, Schumer’s brand of comedy has managed to do what many critics have historically thought was impossible — getting a huge male audience to laugh about what have historically been seen as “women’s issues.” Certainly, talented female comedians like Tina Fey, Amy Poehler, Wanda Sykes and Sarah Silverman have been making us laugh for years, but Schumer’s spin on women’s comedy is unique in its sheer insistence in forcing viewers to contend with American misogyny head-on. Her incisive look at how women are bullied and belittled, cajoled into losing weight, and, time after time, have horrible, unfulfilling sexual experiences has become the backbone of the entire series.

In an age of #YesAllWomen, Schumer’s comedy taps into a kind of feminist cultural zeitgeist, which isn’t afraid to depict the reality that being a woman in 21st century America society is awful, rather than empowering. Many other feminist comedians in recent years have also criticized a culture that constantly tells women how they should think, feel, eat and fuck.

It’s a powerful and intelligent message of female solidarity, but it’s also one that is predicated on a flattened experience of being female. With few exceptions, the high-profile female comedians of today paint being a woman as an experience of fear, bullying and debasement — from Jessica William’s sharp take on catcalling and street harassment for "The Daily Show," titled "Jessica’s Feminized Atmosphere,” to "Full Frontal with Samantha Bee," which promises an escape from the “sausage fest” of late night television. Heck, even chipper Kimmy Schmidt’s coming- of-age story involves being kidnapped and held against her will in a bunker. If #YesAllWomen is this generation’s feminist rallying cry, it points to a generation of women who aren’t just railing against the patriarchy; they are intrinsically distressed at what it means to be a girl in the world.

Ilana’s self-love stands out against a landscape of female protagonists who are presented as being at the mercy of a misogynistic culture. While shows like "Inside Amy Schumer" hold a mirror up to patriarchal America by focusing on the life of a self-deprecating and insecure “Amy” who eagerly washes off and then puts back on her makeup when an imaginary boy band tells her to, Ilana is cramming a bag of weed into her vagina, which she fondly refers to as “nature’s pocket,” and getting off with a guy who offers to go down on her for 45 minutes (she later dumps him for his crappy improv act). Ilana’s Kanye-level confidence is more than just delightfully absurd — in a sea of smart, beautiful female comics who mine self-deprecation for laughs, Ilana Wexler presents a vision of female comedy that both fiercely feminist and genuinely hopeful.

None of this is to say that Ilana is a “role model.” After all, in many ways, Ilana is completely off-the-wall and foolish. She harasses her co-workers, is often sexually inappropriate and is so wrapped up in her own “woke” identity that she often says racially and culturally insensitive things. (When reflecting on her preference for black as opposed to pink penises, Abbi sharply points out to Ilana that, “You’re so anti-racist sometimes that you’re actually really racist.”) The show often smartly calls attention to this fact. In one episode this season, Ilana’s roommate gently suggests that her gold hoop earrings with the word “Latina” written on them are simply appropriating other cultures, as Ilana sits on the bed next to him sobbing white feminist tears.

Ilana’s humor generally comes from this type of willful misinterpretation of the world around her. In some cases (like in the aforementioned one) the joke is very clearly on her, but in others, the joke is clearly on a sexist society. In Season 2, Episode 10, for example, she spies a “Female Body Inspector” shirt at a store and excitedly tells Abbi she has to get it. “I’m a female and I love to inspect bodies!”

Of course, Ilana is wrong. On a show like "Inside Amy Schumer," the character “Amy” would be going on a date with a guy who wears this kind of shirt on a first date and we’d laugh at how tacky and offensive it is. After all, in reality, we know that no amount of feminist rebranding is going to reclaim the meaning of a sexist piece of swag. But the wonderful thing about watching "Broad City" is getting to cheer for Ilana as she joyfully tries to do it anyway.