Sam Brownback's Kansas is still a nightmare: The state's latest ultra-conservative war may be its worst yet 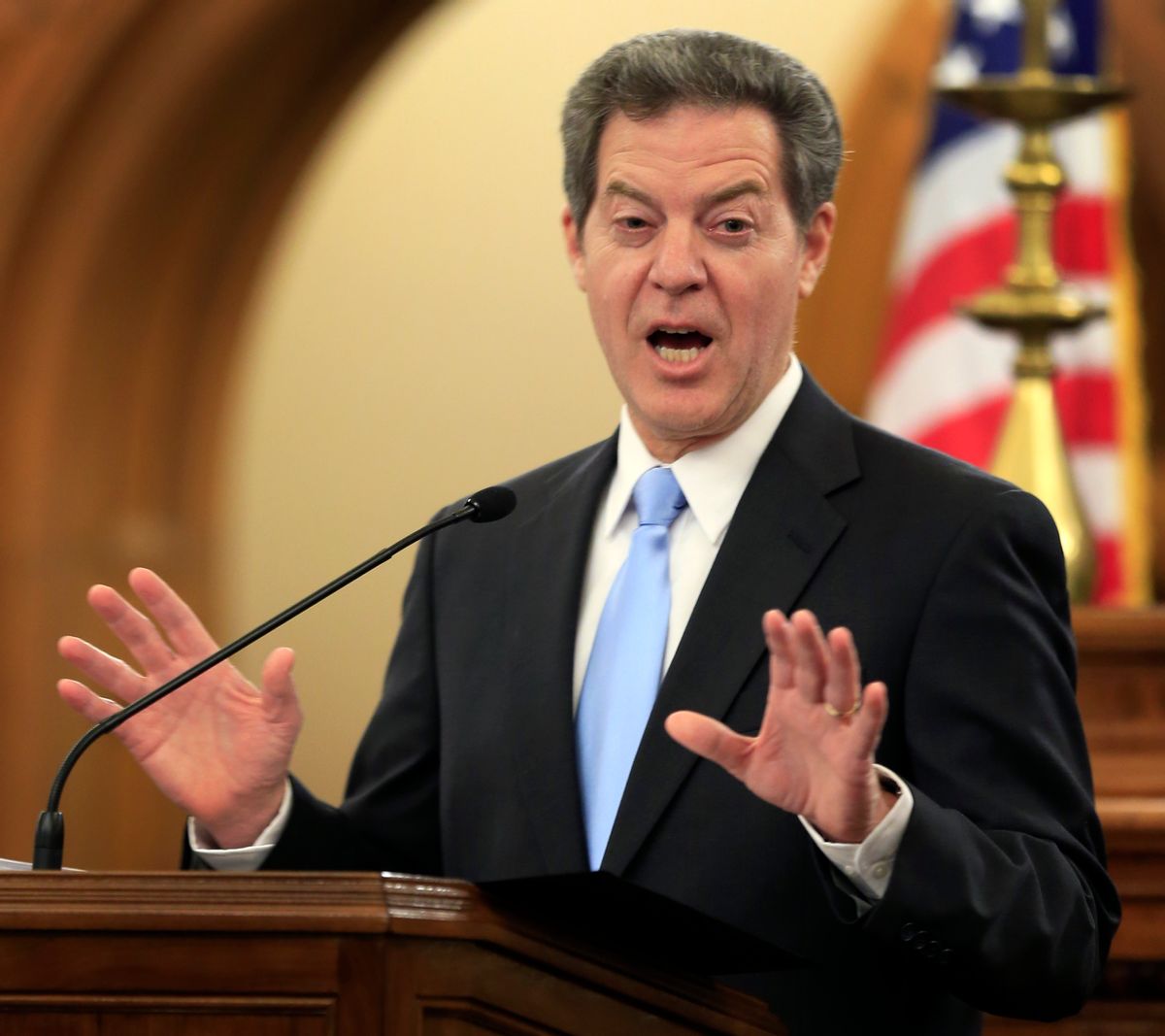 Two of the latest flying monkeys that Kansas’s ultraconservative legislative leadership has unleashed on Kansas public education (including higher education) are a pair of bills, House Bill 2737 and Senate Bill 513, collectively known as the “Student Physical Privacy Act.” These bills would require that multi-person restrooms, locker rooms and shower rooms be designated for one gender only, with gender ignorantly and solely “determined by a person’s chromosomes, and... identified at birth by a person’s anatomy.”

The bills further mandate that anyone witnessing a transgender person in one of these spaces can sue their school district or university for $2,500, creating not just a financial hardship on educational institutions but also a financial incentive to out transgender students. Truly a move worthy of the Wicked Witch of the West. I’ve no doubt that if a version of these bills eventually passes both legislative bodies and reaches Gov. Sam Brownback’s desk, he’ll continue to operate from a place of fear and ignorance, and sign it.

It’s important to point out that these bills are based on the inaccurate views of a) biological sex and gender identity being only binary in nature and b) biological sex always aligning with one’s gender identity. One’s biological sex has a genetic basis, with environmentally influenced anatomic manifestations that can actually vary beyond the traditional “man” and “woman” categories. And gender identity refers to how individuals perceive themselves relative to inner concepts of male, female, some blending of the two, or neither. It is determined by a combination of physiological, psychological and social/cultural factors, and therefore isn’t necessarily tied to biological sex. Gender can also be a fluid concept for some individuals, varying over their life or even moment to moment.

"Transgender" typically refers to individuals who identify with a different gender than the one they were assigned at birth. Unfortunately, because such individuals are smaller in number relative to the general population, they commonly fall outside of the majority social/cultural norms of gender identity (usually binary and aligned with biological sex). As a result, they’re too often subjected to varying degrees of discrimination, isolation and even physical violence, born out of fear and ignorance. Traumatic for anyone, but especially for transgender youth.

Fear is a powerful motivator, particularly when combined with ignorance. Fear of the unknown. Fear of “the other.” Fear of losing the comfort, surety and concreteness provided by your worldview. Fear of evidence, reality and what’s beyond your sphere of awareness turning your world upside down. Fear can drive one in a desperate struggle to fit the world into unrealistic categories, even when it harms those you consider “the other” (and sometimes specifically because it harms them). Even when those “others” are children.

And certain conservative religious worldviews, including some conservative Christian worldviews, see the norm for biological sex and gender identity as binary only and completely aligned with each other. Any variation from that, including transitioning genders, is minimally seen as disruptively abnormal, and at worst as an abomination in the eyes of God.

Therefore, it can’t be tolerated in our public educational environments because it’s a threat to their worldview; it exposes their children to transgender students, LGBTQ (lesbian, gay, bisexual, transgender and queer/questioning) issues and other ideas that threaten the continuity of their conservative religious view of the world. Senator Mary Pilcher-Cook, Republican from the 10th District, exemplified this when she stated, “Parents have reached out afraid for their children’s safety [relative to transgender students] and they do not want attention for fear of being called a bigot...” So out of fear and ignorance they enact legislation to protect their worldview.

They also seek to protect their children and others from, according to the bills, the “potential embarrassment, shame, and psychological injury” they could incur from sharing a locker room or restroom with a transgender student. But let’s be clear that such trauma, if it occurs, isn’t the result of the transgender students. It’s the result of a view of the world rooted in an ideology that is narrow, exclusionary and willing to ignore conflicting evidence. Clinging to such a worldview no doubt can result in emotional and psychological trauma when confronted with the reality outside such a narrow perspective.

Unfortunately, we’re also seeing this in multiple states across the nation. North Carolina’s governor recently signed a bill that a) prevents cities from allowing transgender individuals to use the public restrooms they identify with and b) restricts cities on the nondiscrimination laws they may pass. And the Human Rights Campaign reported that more than 100 active bills targeting LGBTQ individuals are being considered across the U.S.

So how do we combat this? Well, obviously voting the ultraconservatives out of office is a really good way to ensure such legislation is repealed and/or never worked on to begin with. Beyond that, one of the best things to do is to create situations pushing people to break outside of their bubbles – so they get to know someone who has transitioned genders and no longer see them as the “other.” It can be a critical step forward for reducing any nervousness associated with sharing restrooms. Taking away the ignorance often reduces the fear.

It’s easier said than done, though. The anxiety and angst created when worldviews are turned on their heads can be difficult to overcome. Some individuals never do. A longer-term game plan involves creating safe and equitable environments in our schools. In the Lawrence school district (USD 497) we have built on our ongoing racial equity work to also include a board goal around investigating the needs and improving support for our LGBTQ students. Currently we have Gay Straight Alliances in every middle and high school, with the intent of creating greater awareness, understanding and acceptance of LGBTQ students and their needs in our school communities.

We’re also currently beginning the master planning efforts to renovate our older high school. As part of that renovation, we plan to take the needs of transgender students into account relative to restrooms and locker rooms. But these bills, in addition to hypocritically taking local control away from communities, threaten our ability to create safe and equitable learning environments for all of our students, including transgender students.

Kansas is facing a major crisis as its budget woes continue, with some projecting a total shortfall of up to $200 million by the end of this fiscal year. Public education and other services continue to be inadequately and inequitably funded. Individuals and businesses are rethinking whether Kansas is really where they want to be. With all of this going on, the ultracons have decided it’s worth the effort to ignorantly legislate students’ private time in the restroom, to continue lobbing their flying monkeys at public education. As a result, many Kansans are looking forward to the fall elections, so we can dump that proverbial bucket of water on the witch’s head.