Gov. Bentley of Alabama shows his sexist side, refusing to resign while his alleged mistress loses her job 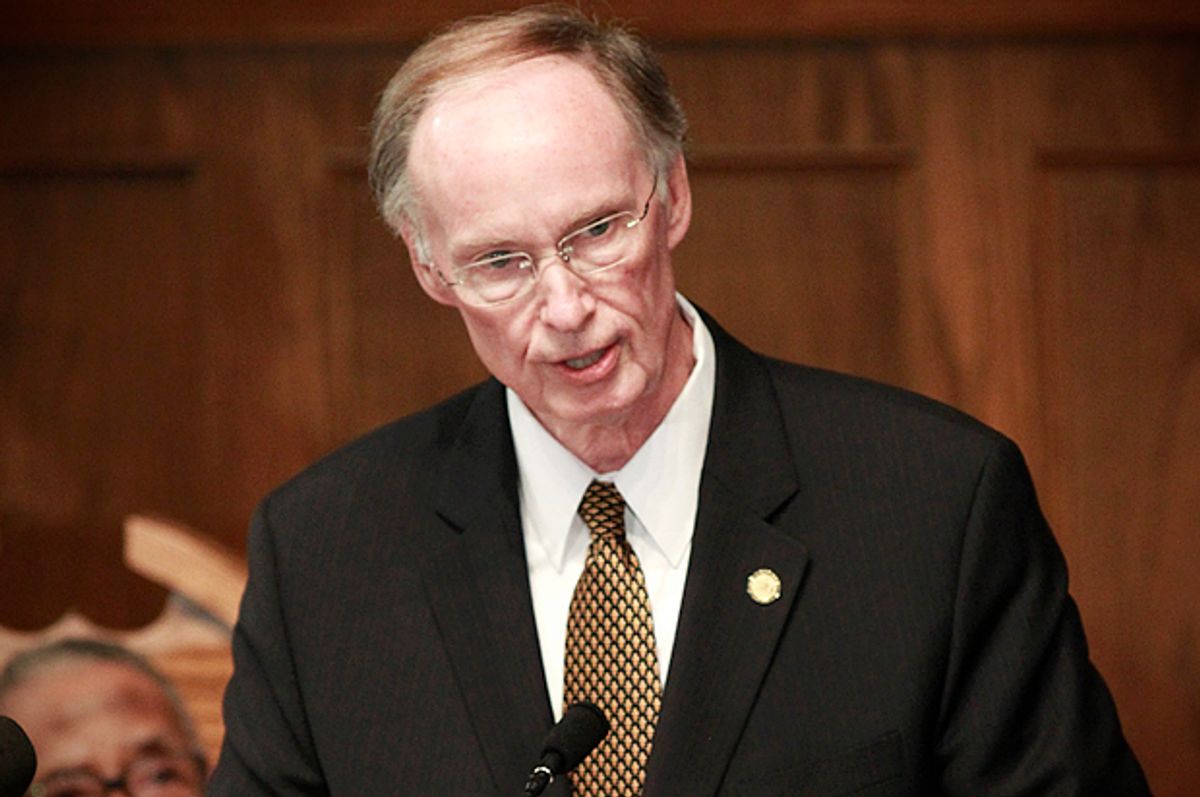 The sex scandal going on in the governor's office in Alabama was already a hypocritical horror show, but this week things got even worse, as Gov. Robert Bentley's pretense that his religious values are about morality and not just an excuse for male dominance is crumbling.

Bentley got elected to office on a "family values" platform, which is right wing code for being the sex police. In office, he's more than lived up to his sex policing promises, slashing funding for birth control, fighting to teach kids that all sex outside of marriage is wrong, denouncing same-sex marriage as a "social experiment", and trying to regulate legal abortion out of existence.

While he was doing this, he was carrying on a sexual relationship with Rebekah Mason, his top aide and most definitely not his wife. Now Mason has resigned her position, saying she wants to "focus my full attention on my precious children and my husband".

But not Bentley! No, Bentley has dug his heels in and insists he is going nowhere.

He also took a dismissive view, saying that while he may have made mistakes, "I admit those but we have addressed those.”

Even for a conservative, this is an astounding double standard. She has to lose her job and do the penance lap, while he gets to keep his job and play the victim here. Meanwhile, there is no sign that Bentley intends to lay off his policies aimed at punishing women for having sex in his state or to back a form of sex education that acknowledges that sex for pleasure is a normal, acceptable behavior. The "fun is for me, consequences are for everyone else" mentality on display couldn't be more stark.

Sure, Bentley denies that he ever touched Mason, though that's not an easy line to swallow, considering that the recordings that were released of his phone calls with her involve him describing, at length, how much loves touching her body. Prior to the tapes coming out, Bentley refused to answer questions about rumors he was having an affair, so it's not like he has a history of being forthcoming about these matters.

But regardless of who touched who when, the fact remains: Bentley clearly feels entitled to get a pass here, a pass he has no interest in extending to anyone else. Watching a woman take the fall while the man keeps shrugging this off is especially galling, under the circumstances.

The issue here isn't having an affair per se. If Bentley was a pro-choice, pro-gay politician who kept his nose firmly out of other people's business, then he would deserve the same courtesy. But his behavior throughout all of this has been that of a man who clearly thinks that rules are for other people but not for the might straight white Republican guy. If you even try to hold him to the same standards that he holds others, he just gets angry and dismissive and wonders why we're even talking about all this.

No doubt there was a time, within Bentley's life even, where his rules-are-for-other-people attitude worked out just fine with well-off straight white men like himself. But, increasingly, religious right forces are realizing they need to do a better job of at least pretending that their anti-sex stance is an equal opportunity buzzkill. Bentley's imperious act where men get to have sex while women pay the consequences is starting to make the rest of them look bad.

The First Baptist Church Tuscaloosa gets this, which is why they publicly affirmed that neither Bentley nor Mason is a member of their church any longer. And some members of the legislature get it, which is why they are making calls for his impeachment.

To be clear, there is absolutely no real intention here of actually treating men and women the same when it come to their notions of sexual sin. Legislative efforts are almost exclusively aimed at depriving women of health care, such as abortion and contraception, in order to punish them for having sex, while no similar efforts are being launched to make sex more fraught for men. (With the exception of gay men, whose right to marry continues to be denounced by conservatives.) But Bentley's behavior underlines and highlights and puts an exclamation point on the huge sexual double standard here. Maintaining the illusion that religious conservatism is about "morality" and not about using sex as a weapon to keep women in a second class status means men like Bentley need to go. It's very much a sacrificial lamb situation and not about any sincere interrogation of the deep injustice of their views.

That's because there is no real reason to hold such anti-sex views, except to oppress women and LGBT people. Birth control, sex ed, legal abortion, and same-sex marriage rights don't hurt anyone else. On the contrary, all the prevailing evidence suggests that these things make life generally better for everyone, by reducing maternal mortality, helping children be born into better circumstances, improving women's access to work and education, helping LGBT people with health care and property rights, and oh yeah, making sex, which is an important part of people's lives (ask Robert Bentley!) easier and safer and less fraught for everyone.

The only value that anti-sex views like Bentley's have is that it helps keep straight white men on top while putting the boot on everyone else's neck. Since that's the motive here, Bentley's behavior isn't too surprising. But the uncomfortable reaction it's provoking shows that the religious right knows full well that letting him take a pass on this one amounts to an admission that their beliefs are just about misogyny and homophobia and not "values."Thus, the pressure on him to take one for Team Male Dominance and resign.

But, and it's hard to quarrel with him on this, what's the point of male dominance if a man doesn't get to enjoy it? And so Bentley will keep hanging in, enjoying his privilege and making his conservative allies irritated that he's letting everyone else in on their dirty little secret, that this was never actually about "morality".