All Donald Trump, all the time: How our dumbed-down media creates a dumbed-down electorate

Yes, voters are angry and GOP is in disarray. But the sorry state of journalism speaks volumes about Trump's rise 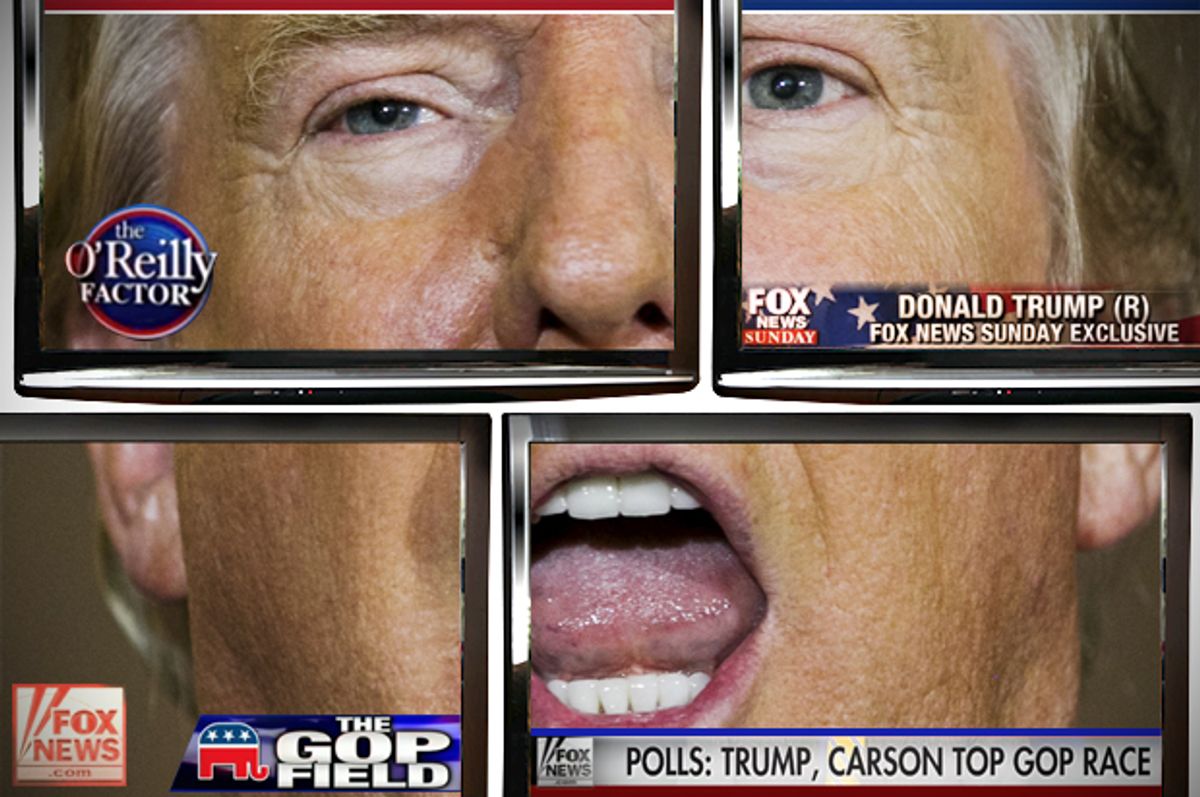 Journalists are searching for an explanation of the Donald Trump phenomenon, trying to comprehend how a real estate developer/reality TV star is close to seizing the Republican nomination for president of the United States. They point to the angry electorate, disarray and dysfunction within the Republican Party, but the best explanation is staring journalists in the mirror.

Donald Trump’s huge success in the presidential campaign is a direct result of the state of journalism in our country. In today’s media environment, journalists crave a character like Donald Trump, which has led news organizations, particularly broadcast outlets, to virtually pave the road for Trump’s drive to the White House, not simply by granting him unlimited airtime, but by failing to deliver enough quality reporting that truly informs the public.

We live in an age of personality-driven celebrity journalism, where the misdeeds of foul-mouthed housewives become news, where soft news morphs into hard news, where morning news programs serve to promote their network’s entertainment shows.

We live in an age where partisan sniping masquerades as journalism, where entire networks are dedicated to mocking those who hold political views differing from the network’s editorial stance, where on-air vitriol helps sets the tone for our political discourse.

We live in an age where journalists are dedicated to generating outrage. The question in editorial meetings is not, “How can we best inform our audience?” Rather, editors and producers want to know, “How can we get viewers, listeners and readers angry? How can we generate heat so they’ll keep watching, listening and reading?”

We live in an age where the priority at most news organizations is no longer to enlighten the public; it’s to attract and hold the audience. The concept of news as a prestige loss leader went out the window at the TV networks many years ago. Today, it’s all about ratings and eyeballs. That’s the case for virtually all news organizations struggling under the economic weight of an Internet that has vastly increased the flow of information but made its users think news is a commodity one need not pay for, since an endless supply of it is available gratis online.

We live in an age where political reporting is all about the horse race, not about issues that impact voters and determine the future of the nation. When was the last time you watched a story devoted entirely to policy positions? Given their scarcity, one has to actively search for policy stories, but how many Americans take the time to dig beneath the surface of the latest campaign news?

Enter Donald Trump. He checks all the boxes above: a flashy celebrity with a larger than life personality and mouth, masterful at attracting attention, generating outrage and tapping into the electorate’s anger. And never mind the issues; for him, it’s all about the race.

Reporters and their editors know they’re going to get an interesting story when the topic is Donald Trump. I certainly did the many times I interviewed him and reported on his business dealings. Donald’s raison d’etre is to win by getting the most, whether it’s real estate, women, dollars or votes. He desperately wants to be bigger and better and let the world know it. Such proclamations from the mouth of The Donald make for juicy soundbites and strong ratings for those who broadcast them.

Consequently, the media are flocking to Trump. The New York media’s obsession with Trump has been going on for decades, as reporters have chronicled his rise in society, his ambitious building plans, his innumerable legal battles, his wealth, his companies’ bankruptcies, his dalliances, sex life and marriages. Except now he’s running for president. So when TV networks air his campaign appearances non-stop, and producers book him for interviews as frequently as possible, he’s placed in the spotlight to the near exclusion of all other Republican candidates. This free media, of course, has allowed Trump to minimize his spending on campaign ads. The networks have granted Trump many multiples the airtime of other Republican candidates, not to elucidate the issues at stake in the presidential race, but to boost their own ratings.  As CBS CEO Leslie Moonves put it at a recent investment conference, “It may not be good for America, but it's damn good for CBS. The money's rolling in."

It’s not just the unfiltered coverage that’s a problem. Reporting of the entire campaign has been Trump centered. Even the questions at debates have focused on what The Donald said, when moderators could have spent more time pressing candidates to address the real issues. Instead, the talented moderators, some of whom are my former colleagues, chose to encourage brawling among the candidates. Good for ratings, but bad for our understanding of how a candidate might actually govern.

Where are the stories that dive into issues? Where’s the digging into candidates’ seamy backgrounds? Not every news organization is guilty of ignoring substance, but in this campaign the majority are. Too many editors have abdicated their responsibility. As a result, the electorate as a whole is poorly informed.  People who vote for Donald Trump know that he’s a braggart, was the star of "The Apprentice" and "Celebrity Apprentice," and that he has a reputation for being a successful businessman. Do they know much more? I’m skeptical that many Americans who are voting for Donald Trump know the real Trump. Do God-fearing Christians know that Trump openly cheated on his first wife? Do those who admire Trump for “telling it like it is” know that he repeatedly has been sued for breaking promises to his business partners and investors? Because many Americans have yet to see the underbelly of Donald Trump, he’s been able to draw a following of millions who only know the Donald Trump they’ve seen on television, claiming he’ll “Make American Great Again.”

People who vote for Donald Trump know that he’s a braggart, was the star of "The Apprentice" and "Celebrity Apprentice" and that he has a reputation for being a successful businessman. Do they know much more? I’m skeptical that many Americans who are voting for Donald Trump know the real Trump. Do God-fearing Christians know that Trump openly cheated on his first wife? Do those who admire Trump for “telling it like it is” know that he repeatedly has been sued for breaking promises to his business partners and investors? Because many Americans have yet to see the underbelly of Donald Trump, he’s been able to draw a following of millions who only know the Donald Trump they’ve seen on television, claiming he’ll “Make American Great Again.”

Americans who rely exclusively upon TV news to learn about presidential candidates are ill-informed. But many do, which is bad for our society and our democracy because a poorly informed electorate results in an information gap through which a completely unqualified candidate can be swept into office.

It doesn’t fly for news executives to claim, “We’re giving the public what it wants,” or “The leader in the polls always gets more attention.” News organizations are feeding the public junk food during this presidential campaign when it desperately needs nutrition. This is an abdication of the media’s responsibility to the public. TV news directors, executive producers, publishers and editors, we are better than this.  Set your smart, industrious reporters free. Let them do some real digging, let them truly inform their audience, rather than merely try to keep them entertained.

As we examine our country amid the surprising results of this presidential campaign, we must recognize the importance of vibrant, non-partisan expository journalism to the well-being of a society. That’s particularly true during political campaigns because too frequently, campaigning involves lying about one’s opponents. It’s time for deep-pocketed owners of news organizations to recognize the critical role that a robust media play in America and be willing to commit resources to strong issues-oriented and investigative reporting.  Owners of news organizations must remember they have a higher purpose than simply trying to make money. For the strength of our democracy, they need to rededicate themselves to journalism that truly informs the public by shining light on the truth.