An osprey's untimely demise: The sad tale of a raptor held for ransom

TenTen's captor thought a bald eagle would be his ticket out of Haiti. There was just one problem with his plan 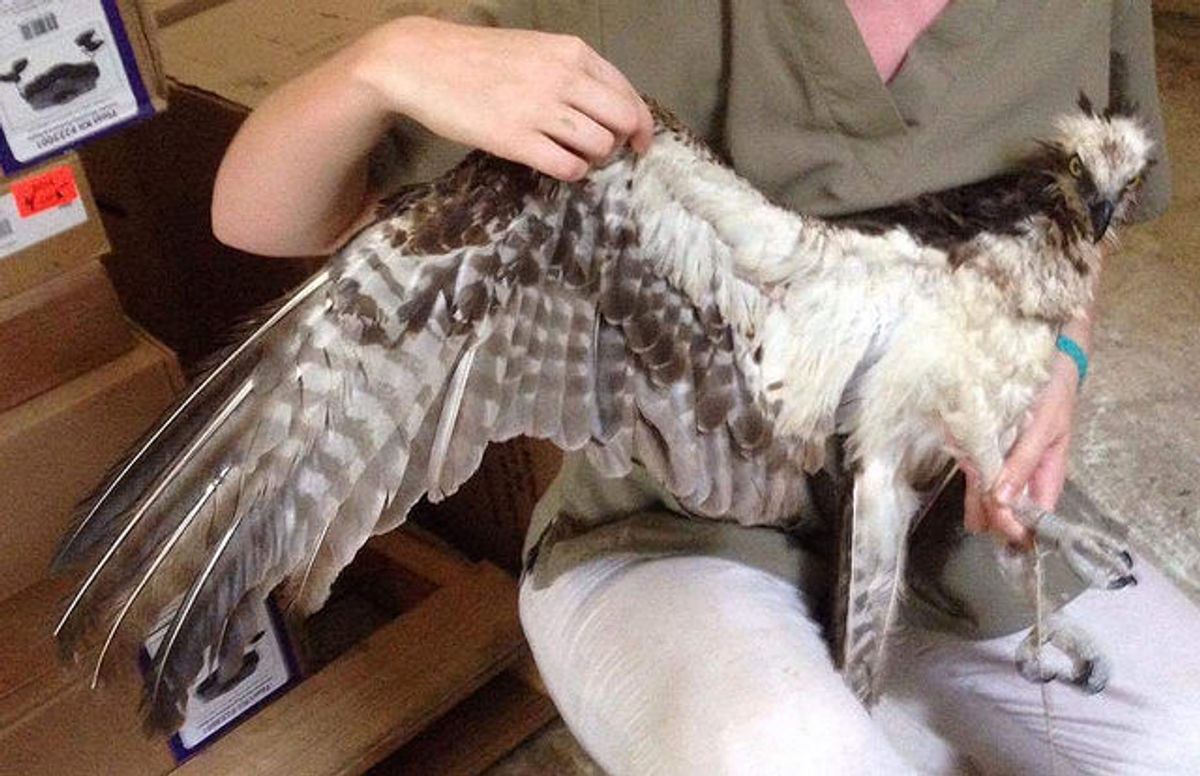 In early February as Haitians took to the streets of the capital city of Port-au-Prince in violent protest against the government, a quieter political drama of international consequence unfolded in a far away village in the Central Plateau where a man held a migrating raptor for ransom hoping it would be his ticket out of the country.

The osprey's captor initially mistook it for an eagle — a well-known symbol associated with the United States, and hoped to use it as his ticket out of Haiti.

The man and his neighbors mistook the bird, an osprey, for an eagle — a well-known symbol associated with the United States even in this remote village. The bird carried particular weight because it had a metal band on its leg that listed an eight-digit number — 788-10910 — and had “Washington, D.C.” inscribed on it.

“They’d assigned guards to this bird. Everyone wanted a piece of this bird and thought they were going to get a reward because it was a bald eagle,” said Kelly Crowdis, a Port-au-Prince-based American veterinarian who traveled from the capital — driving for hours, taking two boats, and walking more than two-and-a half miles — to examine the bird after she heard about it.

Local police and politicians, representatives from Haiti’s Ministry of Agriculture  and many others tried to no avail to take custody of the bird, but the villagers and the bird’s captor would not surrender the bird.

“They thought because the bird had a band on it that it had a specific owner,” Crowdis told me over the phone from Port-au-Prince. “You can’t blame them. We tried to explain to the people and the entire community that this was a migratory bird.”

The osprey did not have an owner, exactly, but the number on its band did lead to clues about its origin. It was banded in 2001 as a nestling in Massachusetts under a federal permit belonging to one Norman Smith, who works for Mass Audubon.

Reached by phone, Smith said the osprey belonged to an ongoing study begun 35 years ago in which more than 6,000 birds were given unique tracking numbers. This particular bird was banded in the last week of June of 2001 at two weeks old, just two months before it would make its first solo journey to South America. (The average lifespan of an osprey is 15 to 20 years.)

Ornithologists, biologist and other researchers have been tracking and studying birds for about a hundred years, primarily through a federally mandated program that has been in operation since the signing of the Migratory Bird Treaty Act of 1918. An estimated 2 to 3 million birds have been banded as part of the North American Banding Program, explained Jo Lutmerding, a biologist with the USGS Bird Banding Laboratory, which operates in partnership with the Canadian Wildlife Service.

The bird lab maintains a database receiving some 85,000 “recovery” reports annually — mostly from hunters who have killed geese and ducks. The lab forwards this information to biologists and others who have tagged birds for studies on issues such as population dynamics, species longevity, spread of disease, and migration.

Raptors, which include osprey, peregrine falcons, eagles, and other meat-eating birds that share hooked beaks, keen eye-sight and eight sharp talons, came close to extinction in the 1960s and ‘70s because of pesticides, including DDT, which was banned in 1972. “That’s what stopped the use of DDT,” said Smith, adding that since then raptors’ numbers have rebounded. (These birds of prey, however, are still at risk from widely used, second-generation rat poisons.)

The ospreys tagged in Smith’s study began arriving back in Massachusetts last week, where between 200 and 300 nesting platforms have been constructed along the coast. The ospreys return annually to nest and breed, typically with the same mate. Sadly, this year, No. 788-10910, or “TenTen” as it the captured bird was nicknamed by another American veterinarian, Myriam Kaplan-Pasternak, who tried to negotiate for its release, will not make it back.

Kaplan-Pasternak, a California-based veterinarian who has worked as an agricultural development consultant in Haiti for nine years, heard about the bird via social media. Stranded in her hotel in Port-au-Prince because of the political protests, Kaplan-Pasternak saw a photo of the bird when it was posted to a group on WhatsApp (a mobile messaging platform) and immediately fired off emails to a number of people in Haiti and the US, including Kelly Crowdis and Rob Bierregaard, who maintains an osprey tracking website that includes interactive maps that chart the birds’ routes through the Caribbean.  Kaplan-Pasternak entered the bird’s ID number into the bird lab’s reporting system and Bierregaard determined where it had been banded.

Studying the bird’s migration routes and patterns has led to an understanding of the importance of the Cuba-Hispaniola osprey “highway to the tropics,” said Bierregaard, who also happens to be an associate of Smith’s. “This is an important bottleneck for all the East Coast ospreys and quite a few from the Midwest,” Bierregaard said via email. “Anywhere from 40,000 to maybe two or three times that migrate through the Caribbean each year.”

Bierregaard estimates that 90 to 95 percent of the East Coast ospreys winter in South America.  “A few stop in the southeast US and some stop in Cuba, but almost all go on to South America,” he said. “They rarely linger in Cuba or Hispaniola. Cuba can be crossed in five days or so, but they’ll stop and fish at reservoirs if the weather’s bad for migrating.”

How and who exactly captured TenTen remains a bit of a mystery. The prevailing version begins with an eight-year-old boy swimming in a river, catching the bird as it fished and surrendering it to the man. “It isn’t easy to catch these birds,” said Smith, adding that the osprey that survive into adulthood are tough and, when healthy, not likely to fall into the hands of people.

It’s not the first time an osprey has been caught and held for ransom in Haiti. In a video posted to YouTube in October 2014, a bird is shown with thin ropes tied to each talon and a boy holding the tips of its wings in each hand stretching them out to show its wingspan. A man, speaking in Creole, asks that a ransom be paid to build a bridge and a school for the area. In this case, people are asked to contact a Jorgenson Pierre Balsan via email for telephone.

When Crowdis visited TenTen, she was concerned by the number of people who were coming to see it and urged its captor to get the bird off the ground and to give it some privacy. Before she left, she also advised them to feed the bird live fish in a bucket so it could kill the fish itself if possible.

TenTen’s captor gave it a perch.

Meanwhile, Kaplan-Pasternak, who as a child once rescued a male raptor who stood in traffic alongside its mate that had been killed, texted furiously with the host of a national, nature-based radio program in Haiti, sharing information about TenTen, its whereabouts and health, and offering a reward for its release.

Unfortunately, before the osprey’s release could be negotiated, it fell off its perch and strangled itself in the rope it was tied down with.

The death of TenTen marked the third time Smith learned about the demise of birds from his study while crossing the Caribbean. Two other birds his team had banded died in Cuba, one of them shot by a man who claimed to have eaten it.