A Trump presidency would be like no other in American history, so let's look at comics to see how it could turn out 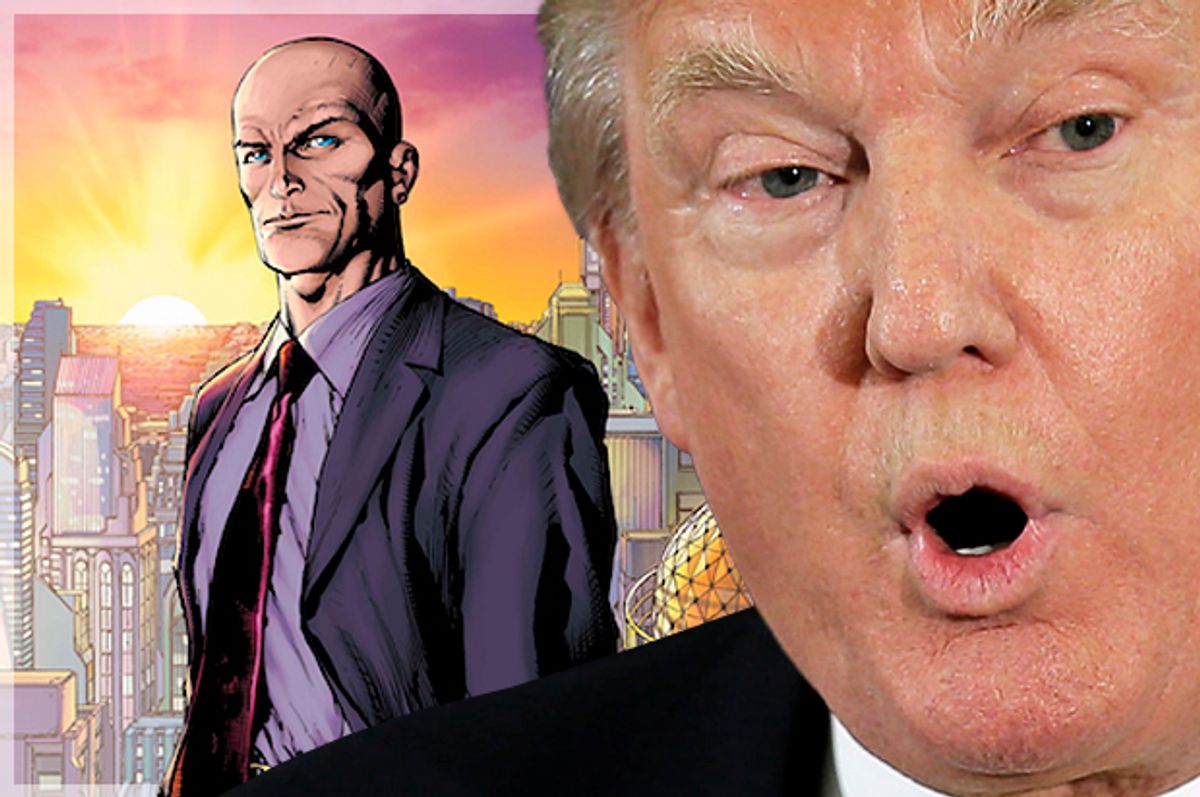 The idea of Donald Trump as president—a horror that seems more possible all the time—is mind-boggling. When a mind is boggled, it reaches for some unlikely comparisons, since even the days of Dubya seem preferable to the dawn of Donald.

For my money, there’s only one character type remotely comparable to a potential President Trump: evil comic book presidents.

Aside from the evil, these characters are all pretty different. Some are businessmen, like eternal Superman villain Lex Luthor. Some smell like rotten mayonnaise, like demon-possessed Ken Wind of “Elektra: Assassin.” Some will murder their own family members to stay ahead in the polls, like the Smiler from “Transmetropolitan.” But they’re all scary as hell. So let’s see which one is most like our (shudder) potential future leader.

(I excluded all actual presidents portrayed in comics, even though versions of Ronald Reagan and Richard Nixon have been pretty damn evil too. I just don’t think any real person, alive or dead, deserves to be compared to Donald Trump.)

While Trump has never built a Kryptonite robot—as far as we know—he does have quite a bit in common with Luthor, who became president in the DC Universe in 2000. After Gotham was devastated by an earthquake, the Katrina-esque government response left an opening for Luthor, who vowed to rebuild Batman’s city. Of course, the Luthor presidency didn’t go well, and he was removed from office after making a shady deal with space tyrant Darkseid (more on him later). Like Trump, Lex enjoys putting his name all over the place via LexCorp. Unlike Trump, Luthor occasionally shows a glimmer of humanity.

In dystopian future story “Old Man Logan,” America has taken the darkest turn imaginable: Nazi super-soldier the Red Skull, enemy of Captain America since the days of Hitler, has declared himself president. Given the trajectory of Republican candidates from Reagan to Trump, the events of “Old Man Logan” may be here by 2020. If Trump wins and immediately declares himself the Orange Skull, you read it here first.

1986 was a helluva year for comics, producing “The Dark Knight Returns,” “Watchmen,” and “Elektra: Assassin,” an overlooked classic by Frank Miller and Bill Sienkiewicz. This series featured Elektra and a cyborg S.H.I.E.L.D. agent trying to kill a Presidential candidate named Ken Wind who is literally possessed by a demon—and smells like rotten mayo. Wind’s slogan is far more pretentious than anything Trump has spewed (“Not wind like a watch, but wind…like the air”) but the two look terrifyingly similar. Anyone get a good whiff of Mr. Trumpery lately?

Resemblance: 3 and a half jars of spoiled mayonnaise

This president was actually a hologram created by Lex Luthor in “The Dark Knight Strikes Again.” Given Trump’s hysterical fear of being touched, it seems likely that he is also a hologram or perhaps some type of wraith. At this time, my sources cannot verify if Trump is controlled by a supervillain, but it would explain a lot.

Resemblance: 4 signs of the apocalypse

Trump loves to spread conspiracy theories about where people were born; Carroll is a president who participated in a genuine conspiracy in creator-owned sci-fi thriller “Letter 44.” Heavily based on George W. Bush, Carroll led America into senseless wars while wrecking the economy. But there was something else going on, as Carroll revealed in a letter to his successor: mysterious aliens were building something ominous in the asteroid belt between Mars and Jupiter, and everything Carroll did was (supposedly) to help prepare for the threat. After leaving the presidency, Carroll added to his legacy by conspiring with Germany to start World War III. Not exactly Jimmy Carter.

There’s a certain similarity—in smarm and looks—between Trump and the Smiler, the main villain of Warren Ellis and Darick Robertson’s remarkable series “Transmetropolitan.” The hero is Spider Jerusalem, a Hunter S. Thompson type living in a prophetic sci-fi world where information is everywhere but truth is hard to find. The Smiler was the patron saint of phonies, making empty, smirky promises while being an evil bastard behind the scenes. So he’s not too much like Trump, who wears his awfulness on his sleeve. Their biggest similarity is probably their hatred of the press. The Smiler is far closer to what the conspiracy-minded think Bill Clinton is like: someone who feels your pain in public but barbecues orphans in private.

Resemblance: 2 and a half fresh orphans

In "Transmetropolitan," the Smiler beat the Beast, an extremely Trump-like president. In Spider Jerusalem’s Thompson-esque words, he accuses the Beast of “jacking off with the Constitution, shooting great boiling wads of poison sperm in the faces of the assholes who voted for you.” If that doesn’t channel the hideous presidential potential of penis-braggy Trump, I don’t know what does. Jerusalem summed the Beast up as the “…thing in us that votes to fuck other people in the gall bladder, the lizard brain that says nothing but eat-kill-hump-shit.” Wasn't “Fuck other people in the gall bladder” Trump’s original campaign slogan?

Technically, Darkseid is the despotic ruler of hell planet Apokolips, a world of firepits and slave camps, and has never been president of the United States—yet. But he’s a useful comparison. This craggy-faced monster is obsessed with finding the Anti-life Equation, a formula that will rob everyone in the universe of freedom, forcing them all to obey Darkseid’s will. Trump and Darkseid both love torture and hate dissent, while Trump’s angry supporters bear a startling resemblance to Darkseid’s parademons.

Resemblance: Four and a half firepits (would have been a full five, but even the monstrous Darkseid has never threatened to punish women for having abortions)

Despite surface similarities to the Beast, I can say that Trump is closest to a human form of Darkseid.

On the bright side, this answers the media’s favorite question: “How did Trump happen?” Clearly, Trump’s success isn’t just a mean, cynical appeal to everything awful in the human soul, but the successful application of the Anti-life Equation, which spreads rapidly, turning independent people into obedient zombies.

Oh well, I guess it could be worse. At least we’ll all have jobs as extras on “The Walking Dead.”