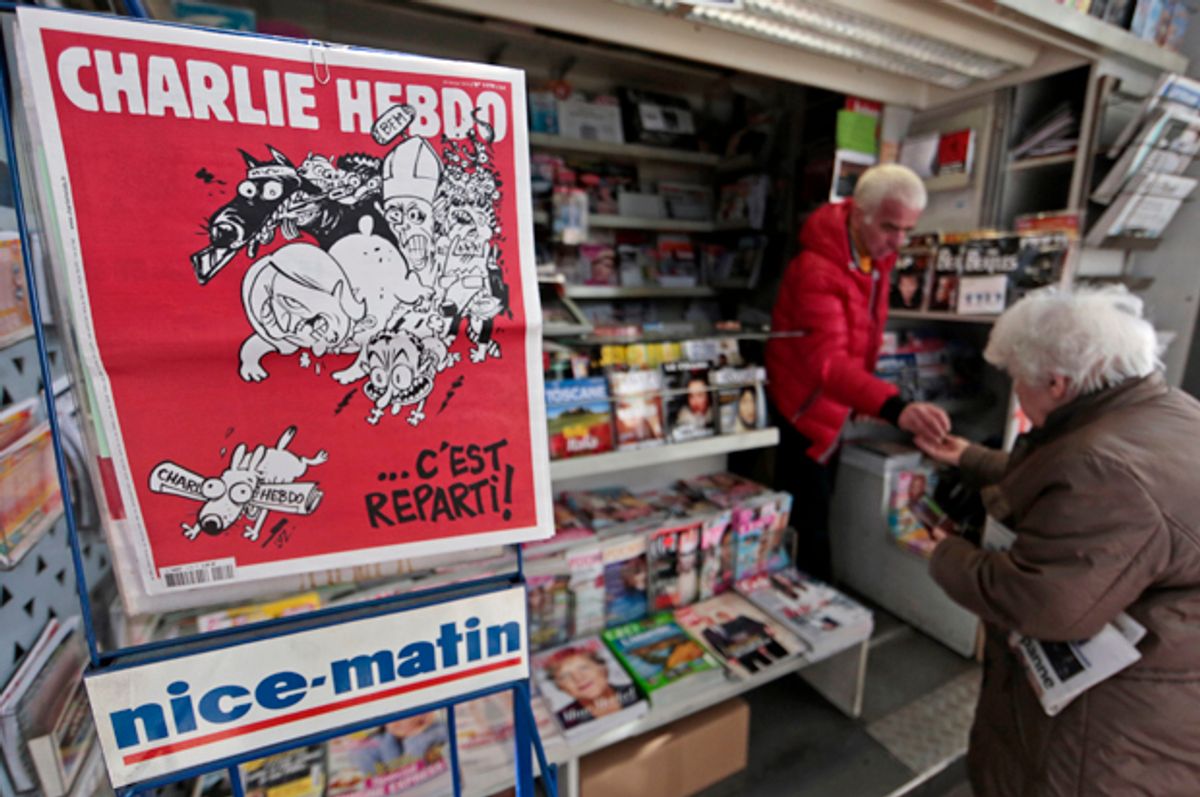 Fifteen months after the attacks on the offices of Charlie Hebdo, there’s still lingering good will toward the French satire magazine. After two terrorists killed a dozen people, we were all, for at least a little while, Charlie. People uncomfortable with the virulence of the magazine’s cartoons fought for the publication’s right to publish. This was a free speech issue, it seemed. A number of people – yours truly included – defended Charlie’s PEN award. It's hard not to feel sympathy for the surviving staff, and friends and family, traumatized this way.

But the latest missive from the magazine’s editors is so extreme, so illogical, it’s hard to know how to take it. Unless it’s satire, it’s so far out of bounds as to make at least some of us who’ve read wonder if this editorial stance is just deliberately intended to reduce its support to nothing — or to just a following of paranoids and people who hate religion.

In coming to terms with the Brussels attacks, the magazine argues that the violence came not from social conditions, not from armed killers, but from non-violent Muslim civilians.

And what’s frustrating about the editorial is that it takes a healthy, democratic idea – that criticism, dissent, discussion, and the like are crucial to a free society – and turns it into a weird anti-religion rant. “How Did We End Up Here” looks at three nonviolent Muslims – a scholar, a pious woman, and a baker – and tries to make them liable for the bombings. After acknowledging that they are entirely peaceful, the editorial tries to connect them to the taxi ride the terrorists take with bombs in their backpacks:

And yet, none of what is about to happen in the airport or metro of Brussels can really happen without everyone's contribution. Because the incidence of all of it is informed by some version of the same dread or fear. The fear of contradiction or objection. The aversion to causing controversy. The dread of being treated as an Islamophobe or being called racist. Really, a kind of terror. And that thing which is just about to happen when the taxi-ride ends is but a last step in a journey of rising anxiety. It's not easy to get some proper terrorism going without a preceding atmosphere of mute and general apprehension.

This will be read by a lot of people as anti-Muslim bigotry. Novelist Teju Cole, for instance, writes on Facebook that that with its latest, the magazine “finally step away from the mask of ‘it's satire and you don't get it’ to state clearly that Muslims, all of them, no matter how integrated, are the enemy.”

From the evidence of the editorial itself, though, it seems as though it's really about hating and fearing all religious people. The Charlie Hebdo piece continues:

This is not to victimise Islam particularly. For it has no opponent. It is not Christianity, Hinduism nor Judaism that is balked by the imposition of this silence. It is the opponent (and protector) of them all. It is the very notion of the secular. It is secularism which is being forced into retreat.

Well, is that really true? Aren’t there plenty of people in France who don’t like Muslims, or religion in general, and say these things in public and private? Aren’t there political parties built on anti-Muslim, rage? And is targeting people who go to church or mosque or temple really the solution here? You can hate religious fundamentalism, religious violence, the Crusades, jihadists, and the rest, without blaming peaceful people who believe in a divine being.

This is precisely the logic also of the masses who praise Trump for his "honesty"—as though only ugliness could be honest, as though moral incontinence were any more noble than physical incontinence.

I’m all for criticism, satire, dissent and debate. A lot of people who originally supported Charlie Hebdo continue to like the idea of a gadfly publication that’s ornery, irreverent, even a little naughty. But when a satire magazine – which by definition is dedicated to discomfort – scapegoats people who make them uncomfortable, it’s really lost its bearings. A baker who won’t sell us a ham sandwich is not the same thing as a terrorist. A magazine that sees it otherwise deserves to become its own punchline.