I'm done with Bernie Sanders: Why this democratic socialist is voting for Hillary Clinton

Bernie's not a more progressive choice, just a different one. The more I compare the two, the less I feel the Bern 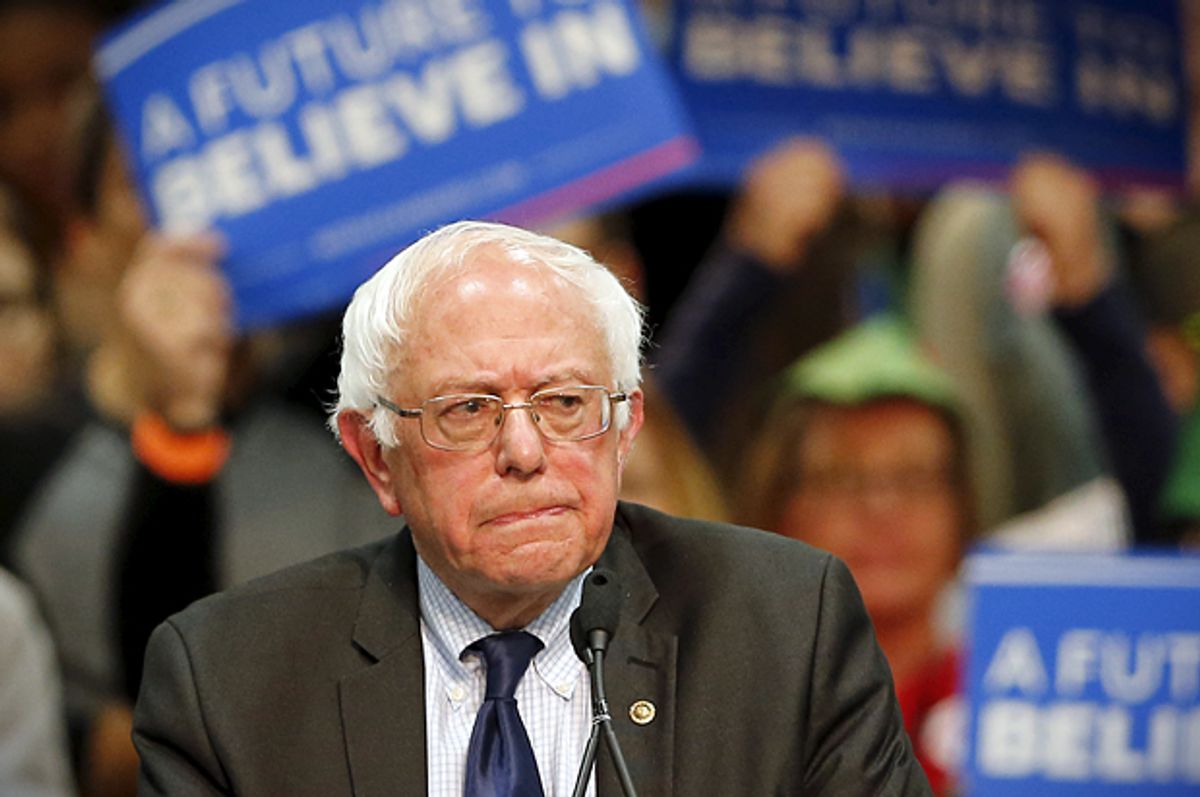 I’ve been a personal fan of Senator Bernie Sanders since my political awakening in college. I was raised in an evangelical Republican household and fed a diet of capitalist ideology for as long as I could remember. I began shifting toward the Democratic Party in my early teens but still got nervous when I heard the word “socialism.” It wasn’t a reasoned response, just a knee-jerk reaction. In truth, I was scared that I might be a socialist. If anyone found out, I’d never be taken seriously again.

A few years later, I was living in a Northeastern University campus apartment in Boston. I had cable for the first time in my life. I was watching a late-night talk show. This brash, quirky senator with a thick Brooklyn accent explained that, not only was he an elected official with no party affiliation, he’s a democratic socialist!

I listened to him outline the most basic explanation of democratic socialism and realized I couldn’t run from it any longer. I was clearly a democratic socialist and always had been. My allegiance isn’t to an unrestrained free market, but a deeply-held position that everyone is entitled to a roof over their heads, food to eat, a solid education and good medical care as a moral right. If we cannot be guaranteed basic dignity under the law, what’s the point of the whole enterprise?

Sen. Sanders agreed with me, and he wasn’t afraid to say so loudly I wanted him to be president and feared America would never accept a guy like him. Fast-forward to 2016, and I found myself dead wrong. The American public revolted against the establishment wings of both parties. The United States was now captivated by this plucky socialist, almost as captivated as they’d become with an orange-haired demagogue who had a bizarre fixation on Mexican rapists.

It was Bernie’s time to shine. But I wasn’t feeling the Bern anymore.

It goes without saying that President Barack Obama’s second term has been fraught with racial tension. The violence Black America has endured reached a tipping point. Police were repeatedly caught on camera shooting unarmed Black men down in the streets, and white America was finally forced to stare the grim reality of this country’s deep, systemic racism in the eye. The response was polarized. Black Lives Matter’s political mobilization and rising racial consciousness among the white electorate stood on one side. Ugly racial demagoguery and white resentment stood on the other.

Unfortunately, amid this mounting racial tension and vortex of inequality, Sen. Sanders looked lost. He spoke boldly about the need for economic inequality, but seemed to not understand that racism existed not only within this form of inequality, but outside of it. He met with Black Lives Matter and adopted major additions to his platform. But it seemed like politicking by time he got around to it, especially when some Black leaders were reporting that he’d “run away” from racial issues while in Vermont.

Conversely, Secretary of State Hillary Clinton launched her candidacy with a detailed and powerful indictment of systemic racism. Amid rising racial tension in the U.S., Clinton didn’t wait to be targeted by Black Lives Matter (as all major candidates eventually were) to care about the issue. She was ready with a surprisingly upfront plan that addressed the realities of systemic racism. And Clinton did this as the presumed front-runner for a party that’s been long afraid of offending white voters. Not to mention, she was the spouse of a man who was hugely to blame for the country’s obscene incarceration inequity.

There is absolutely no way around it: President Bill Clinton and the Democratic Party capitulated to white voters for power at the expense of Black Americans in the 1990s. But Hillary is not Bill and has always espoused a more progressive agenda than her husband. She ranked among the most liberal members of her party throughout her time in the Senate.

It’s also of note that Bill was dragged in front of the NAACP to apologize for his racist policies amid Hillary’s campaign, demonstrating that Hillary is willing to address these issues at the possible immediate expense of her own husband’s legacy.

The Democratic Party still has a long way to go on racial justice, and neither candidate has gone as far as they should. But we should’ve been able to count on the democratic socialist to be far ahead of the party on this issue.

Instead, the woman painted by the media as a cold-hearted Wall Street shill was the advocate trying to understand the issue and implement a solution before she was even taken to task.

For every Charles Koch, there’s a Bill Gates. The amount of money held by a private individual does not indicate anything at all about their moral worth. And the simplistic class warfare dialogue Sanders is choosing to engage is not only cynical, but a betrayal of socialist values.

True democratic socialism recognizes the ills that cause inequality aren’t a matter of cartoon villains, rather a creeping oligarchy caused by convergence of capital that leads to economic polarization. Billionaires aren’t the monsters. At best, they’re the henchmen. The true monster is a faceless evil caused by a system that allows representative democratic government to be slowly replaced by private interests to the point of citizen disenfranchisement due to economic power imbalance.

This faceless monster rewards ruthlessness and gorges itself until it eventually collapses under its own weight. Critics of capitalism often point out that corporations have overlapping traits with the DSM’s diagnostic criteria of antisocial personality disorder, known colloquially as the “psychopath checklist.” Unrestrained corporations will always oppress. Governments without strict regulatory structures and severe protections for the welfare of citizens that ensure the continuation of democratic representation will find themselves morphing into corporate oligarchies, as the U.S. has.

This is the message Sen. Sanders should be shouting from the rooftops clearly. But, instead of educating people about the way lackluster civic engagement will lead to the eventual doom of the nation, Sanders engages in bizarre friendly fire that weakens the candidate who’s most likely to win and do something about this: Hillary Clinton.

Big Oil. Wall Street. Special Interests. Sen. Sanders talks about “the Secretary,” as he not-so-affectionately calls her, with a venom that stands at odds with reality and flirts troublingly with the sexist caricature the far-Right has been painting of her for decades.

At the very least, Sen. Sanders was an honest man. While Hillary was willing to reframe the context and realities of the more unfortunate elements of her past, Sanders was a stalwart truth-teller, irrespective of the implications for his own career. At least, that’s what voters were led to believe. Unfortunately, he’s shown himself to be a regular old politician in this regard.

His stump speech frames Hillary Clinton as the “establishment” candidate, despite the fact he’s been a white male elected official who’s been in office decades longer than Clinton. He insinuates that she’s in the pocket of oil interests, despite the fact they’ve actually contributed more to him than they have Donald Trump. He rails against millionaires while neglecting to mention his own net worth far outpaces the average American.

Despite Sanders’s claim to truthfulness, both he and Clinton currently have a nearly 30-percent false-leaning rate of speech, according to Politifact. In short, they’re both just being politicians. Although, it’s crucial to mention that both Democratic candidates far outpace the Republican frontrunners on the truth metric. But this goes to show Sanders’s claim to purity is a well-constructed farce.

Irrespective of his political relationship with the truth, he’s right about a lot. But he and Clinton fundamentally agree on the majority of issues. On some, like guns, Clinton is actually to his left.

Both Clinton and Sanders are effective progressive fighters. Sanders is not a purer progressive choice, merely a different one. While this piece has examined the holes in the Sanders mythology, I believe without reservation that both Democratic candidates represent positive values and a more progressive path to the future.

When I head into the polling booth, I’m looking for the person with the best proven record of influencing positive change. I will vote for the Democratic nominee in the general election. Period.

The strongest person in this primary race is Hillary Clinton, a successful Secretary of State whose career has been marked by bold positions on major issues, like granting children access to healthcare and ensuring the rights of women abroad.

I’m proud to cast my vote, once again, for a whip-smart, pragmatic and effective progressive woman. And I can’t wait for little girls across this country to hear the phrase “Madame President” for the first time in history.

Most importantly, I’m proud to cast my vote for a party that has shown moral growth and represents the best of our country, as opposed to the greed and fear-driven party of opposition.